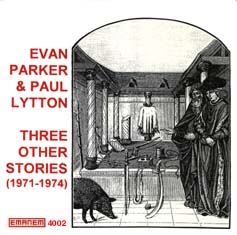 A general statement: our music is a celebration in sound of 'hereness' and 'nowness'. When the wind's in the right direction it can even become a consecration. Regardless of the lack of exposure and informed critical opinion, free music (total improvisation, spontaneous music, free improvisation) has, in the relatively short course of its development, solved its most basic problems. Fundamental to these was perhaps the idea that music lacking pre-arranged structure would also lack character, a sense of development, direction and finally the magical 'form'. In reply it may be said that improvisation is a process that defines its own form. Music criticism often refers to the 'architecture' of a work, on this analogy I should like to state that I'm interested in shelter more than monument.

Evan Parker (b. 1944) and Paul Lytton (b. 1947) formed their duo in 1969, making their first public appearance the following year. They immediately incurred the wrath of more conservative commentators thanks to their exploration and use of what had hitherto been considered "noise". There were, however, several prior precedents for this, notably the electronic music of Edgard Varèse, the collaborations of John Cage and David Tudor, and the 1960s edition of the improvising group AMM. Maybe the Parker/Lytton Duo took things further. Maybe certain listeners were expecting them to play jazz.

There were influences on the Duo that did not start life as 'musical', such as everyday and not so everyday sounds. (The Folkways LP SOUNDS OF THE JUNK YARD was a particular influence on Lytton.) The incorporation of these glimpses of reality, rendered their music less abstract than most, and made it difficult for people who were used to the abstract musics of the likes of Johann Sebastian Bach or Charlie Parker (no relation). Plus, to thicken the plot at various times in the performances, Parker played cassette recordings of prior performances by the Duo.

As well as using the soprano and tenor saxophones, Parker also used some traditional instruments such as a shêng (a Chinese mouthorgan), a bullroarer, a poll drum and a voice tube. Additionally, there were some home-made items, notably the Lyttonophone (made by Lytton but played by Parker) best described as a slide contrabass clarinet, and the Dopplerphone, a length of soft rubber tubing (activated by a saxophone mouthpiece and manipulated to alter the rate of airflow) attached to a longer length of clear plastic tubing (whirled around the head whilst being played) ending in a plastic funnel.

Lytton's kit was enormous, taking about three hours to set up and about one hour to dismantle. As well as numerous percussion instruments, there were also many items whose original purpose had not been sonic, and some custom built items, notably a contrabass cowbell, plus some non-percussive instruments such as air horns and a harmonium. Most importantly, there was a contact-miked frame to which were attached various items to be hit, plucked or bowed. With this, Lytton proved himself to be one of very few people who can make music with electronics, as well as being a fine percussionist.

Three LPs of this duo were issued at the time. All are long out of print. The first two, COLLECTIVE CALLS (1972) and AT THE UNITY THEATRE (1975), feature just one aspect of the duo's wide range of soundscapes per piece. This record features three whole stories, each covering a considerable range of material. Although studio recordings, they are the sort of performances heard in concert at the time. A later complete story, recorded in concert at the Moers festival, was available as RA (1976).

The Parker/Lytton Duo continued throughout the 1970s. Around 1980, this evolved into a trio with the addition of Barry Guy, and the removal of Parker's traditional and home-made instruments and most of Lytton's kit - a somewhat different group that still performs today.

"The Parker/Lytton Duo produced some amazing music during their partnership and this fresh discovery is a cause for celebration."

"Before they joined with Barry Guy, Evan Parker and Paul Lytton worked extensively as a duo, and THREE OTHER STORIES documents their work from a historical perspective. These three extended pieces have nothing in common with so-called jazz; rather, they're closer to the areas of sonic exploration John Cage and David Tudor, or the Italian Gruppo di Improvvisazione Nuova Consonanza, were involved in during the 1960s. Parker's extended techniques are here in an early form and for variety he employs other unusual wind instruments including the Chines sheng and the whirled dopplerphone. Together with Lytton's vast range of timbres (including live electronics), the variable pitches, vague and disembodied sounds they produce attain a vivid drama. The intention seems to be to avoid any kind of rhythmic or textural continuity, to maintain a flow while constantly and abruptly altering, redirecting, and reconfiguring details and dynamics."

"Some AMM similarities, particularly the large-scale architectonic shaping of the two longer pieces, though the duo in its own right attained a remarkable degree of sensitivity in pursuit of a non-idiomatic 'noise' improvisation. Sometimes they built to short-lived crescendi, or quickened to flurries of angular sax phrases and nimble forays across the kit; mostly one's aware of the sustained concentration underlying their delight in sculpting the physicality of unusual sound-textures."

"The Parker/Lytton Duo, in addition to utilising a wide variety of instrumentation beyond saxes and drums, often opted for a random, indeterminate style of interplay seemingly inspired by avant garde classical composer/theorist John Cage and other similarly minded artists. The striking, sometimes spare, visceral sound sculptures they create during sections of Mist, the earliest documented example of their work, and Photic are clear improvisational rejoinders to Cage's Cartridge Music. Noisy, raw, often brutal, always lovely, these sections are especially impressive in the seamlessness of their uneven internal and external shifts of timbre and momentum. They also nicely complement and offset the driving, more clearly (avant garde) jazz passages of the music, an approach which would come to dominate their respective styles. In fact, on the basis of Night, the duo was already solidifying this tendency in 1974, while also opting for a clearer sense of linkage or transition in developing their improvisational constructs."

"They engage their varied equipment with absolutely composed deliberateness, and the results are dense and interesting, both as sequences of textures and as whole pieces. THREE OTHER STORIES are important chapters in the history of the group that evolved directly into the current trio with Barry Guy, and the pieces are well worth hearing on their own."

"The material on THREE OTHER STORIES is a dense palimpset of saxophone, percussion, other sound sources and tapes of previous performances. The result is much denser and blockier than one normally expects from Parker, though recent electro-acoustic work suggests that there are elements here which he still considers valuable."