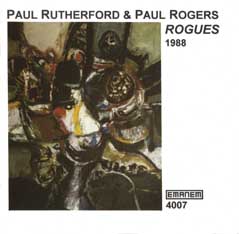 Analogue concert recordings made in Birmingham in the Cannonball
by STU CAMERON - 1988 NOVEMBER 11
Total time 78:45

Paul Rutherford (b. 1940; d. 2007) and Paul Rogers (b. 1956) are two of the finest improvisers around, both as soloists and as group members. They are also two of the finest exponents of their respective instruments. Putting two excellent musicians together does not always make an excellent duo. In this case, it certainly did.

All the magnificent music performed one evening in Birmingham is included on this CD in the order it was performed - except that, sadly, a couple of minutes had to be chopped off each of the solos in order to squeeze the proceedings onto a single disc.

To list the people that the two Pauls have played with, either singly or together would require an expansive (and expensive) CD booklet. Therefore, I am inclined to say that they have played with just about everybody who has made worthwhile music in the last few decades (and some who have not). It might be easier to list the musicians they have not worked with! If you are unlucky enough not to have come across either one of them, then this CD is a good way to make up for that loss. If you are already fans, then this will certainly not disappoint you.

"These two have always been well suited - both extremely fine players working with, broadly speaking, conventional techniques. It is impossible to dislike music this elegant in conception and execution."

"The two engage in an intense musical dialogue, and the opening improvisation clocks in at a staggering 40 minutes, all of it absolutely valid and unformulaic. Rutherford has no apparent desire to deconstruct his instrument, literally or idiomatically, but there should be no doubt about how radical his language base is and how uncompromising is his improvisational approach."

"A superb example of completely free improvisation with no written music involved. The title ROGUES may be some kind of merging of last names but it also exemplifies the spirit of English free music, the need of the musicians to synthesise their experiences by taking everything that had come before, and everything going on around them, and stand apart from it. Fast, happy, propulsive, beautifully capturing the tones and sounds of trombone and bass fiddle. The fact that music of this calibre was recorded live in an English pub represents some kind of peak of western civilisation."

"ROGUES is a duo recording from a 1988 concert featuring the extraordinary trombonist Paul Rutherford with the equally adept Paul Rogers on bass. Trombone and bass duos may seem like a rather lugubrious combination, and this isn't music that leaps out and grabs you, but there is some fabulous playing here that slowly but surely sucks you in. There are two long duets: the first has some great moments and justifies its 40-minute length by getting better and better as it goes along. The second is shorter and they achieve some of those passages of apparently telepathic interplay that make you wonder how it's possible to play so freely and yet so tightly. Between the duets are two shorter solos. Both are fine but I especially enjoyed Paul Rogers' witty and brilliant tour through all manner of approaches to the bass."

"Rutherford runs the whole spectre of his instrument, exploiting all its connotations, from comedy to drama. But Rogers is the surprise here. He adopted that night a slightly jazzy style. Halfway in Rogues 1 he locked into a bass riff, enjoying it, staying there for a couple of minutes to let the trombonist build a solo before taking it apart. His sparse use of the bow during the duets gave more intensity to these moments, especially in the last couple minutes of Rogues 2. His solo is marred by pub noises and tape hiss at the beginning, but it doesn't matter: his impersonation of a classical bassist gradually going mad makes up for it."