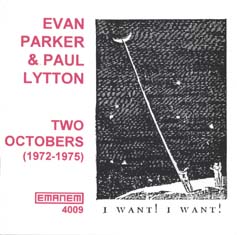 "Listening or whatever: unavoidable between musicians if in near proximity." (Lytton, 1972)

"And then you have improvised music where the fact that there's an understanding is clear, but quite how it works is moved to a level of mystery again." (Parker, 1992)

Even in the early 1970s - when almost every new group seemed to invent a new music - the Parker/Lytton duo was exceptional. Maybe there was some kind of isorhythm, a deep time clock, running through all of it, binding together the silences and moments of terror which make good free improvisation. And I hear some of the rhythms of "chance" music too - a genre that's actually the polar opposite of improvisation, but is often confused with it.

Sometimes they seemed determined to wind each other up to breaking point, stubbornly setting off in opposite directions like two little Good Soldier Schweiks, only to miraculously arrive somewhere previously uncharted. How that happened was always hard to figure out. Wormholes in space?

I once had an idea for a coffee-table book of photos of free improvisers' drum kits. But a photographer in 1974 looking for the definitive Lytton kit might as well have asked for the moon on a stick. The kits mutated into dozens of magical jumbles, juxtaposing cultures and time periods. A Hugh Davies-inspired amplified egg slicer, several slackly tuned bass drums. Changing from gig to gig, sometimes radically, one hopeful monster was a kit mounted on a tricycle. Not quite passing the proficiency test, this one nearly did Lytton a nasty and permanent injury by collapsing as he was riding it.

The enormous cowbell was always there, but there were countless additions and subtractions. The Dexion rack of electronics looked dangerous and rough. A revolving disc had little round boxes, which make animal noises when you invert them, attached.

The late Mal Dean did a series of cartoons in 'Melody Maker', including one of this duo. In it, Parker is playing a drainpipe, complete with grating and running water. Lytton's kit seems mainly to be constructed out of Spitfire parts. No coincidence that their first album was an altered title from a bird record (COLLECTIVE CALLS) or that the Folkways album SOUNDS OF THE JUNKYARD was a favourite. Those sorts of oppositions always informed this duo, in countless ways. Parker's robin, in search of worms, serenaded by a distant car crusher. Music can and does sound like something else. Sometimes.

It was constantly on the edge of something - Lytton's attempts to manipulate more things than any human can, Parker's faster-than-the-mind articulation. His circular breathing, which often flummoxes the most resourceful partners, brought out some of Lytton's most original playing. At the time of this recording, circular breathing was a newly rediscovered art, Parker being the first free player to incorporate it seamlessly into his musical language.

"Already an established and pivotal figure, Parker was continually breaking new ground throughout the seventies. In '72 some of his trademarks were beginning to blossom - the incredible tonguing technique, the circular breathing. By '74 his virtuosity was well in place. The wide ranging experimentation of the first track (even featuring some 'Tibetan chanting' from Evan) gives way to a music of a more intense nature by 1974. Lytton is the more subversive of the two, but one longs for the live presence of the man and his instruments. There are few musicians who could conjure up such a complex, rugged and inventive soundscape, even with contemporary technology. The virtuosity, empathy and vision of these two combine to create music of awesome beauty. I wholeheartedly recommend this."

"Then Wept! Then Rose in Zeal and Awe from 1972 includes some scorching multiphonic circular-breathing by Parker - his technique astonishingly advanced and fertile. Plus, a rare chance to hear Evan in early 70s overtone-singing mode! Lytton's customised percussion and live electronics set-up sounds like a one-man AMM - capable of subtle microtonal complexity and sheer brute force. The monumental (nearly 43 minutes) Two Horn'd Reasoning, Cloven Fiction from 1975 achieves new levels of duo intensity and exploration. As more recordings of this duo surface, so it undoubtedly becomes one of the most important in the development of improvised music"

"TWO OCTOBERS continues the release of previously unissued duets begun with THREE OTHER STORIES. They're essential documents, with their musical quality coming from the rare blending of Lytton's breadth and Parker's focus. While Lytton builds shifting sonic fields out of percussion and electronics, Parker's soprano and tenor provide an intense central point in the field. At times Parker's circulating soprano and Lytton's resonant cymbals sound like they're taking place in a dome, whether some temple ceiling or the head of the listener. Two Horn'd Reasoning, Cloven Fiction, a 43 minute piece recorded in concert in 1975, is the centrepiece, a wonderfully sustained performance that doesn't suggest any larger structural pattern than its own remarkable continuum. While much is said about Parker's conspicuous abilities, Lytton's playing is startling in its suspension of all the usual drumming conventions and the sheer wealth of its content. Nothing obvious arises in what he does, so one is apt to neglect it by reason of it being so resistant to description."

"Together these two men use up a lot of space. Like acrobatically confident children, brought up to trust themselves, they soar and tumble at full stretch in these improvisations, confident of their own limits, and their gestures sweep the room. The range of tones in Lytton's percussion/electronics vocabulary dives from theatrical thunder machine to log drum to supersonic bat twitter, and he's arrhythmic to the extent that he often sounds as if he's quietly dismantling something, rearranging furniture, or accidentally spilling an armful of clutter. Parker strains at the end of the tether of pitch. Here and there he disappears inside himself, hypnotised by his own micromotion - quivering, humming bird hover. On the floor, there's Lytton's electronic gong and scraping and feedback, and at the top of the tent Parker arcing, wheeling, soaring up and up. The sax sets into a circularly-breathed whirlpool, towering up like a starling roost avenue with high electronic flit, jingling like overtones alongside a flurry of silver sparkle. Of these three superlative, previously unissued pieces from this astonishing pairing, the best is also more than twice as long as the others."