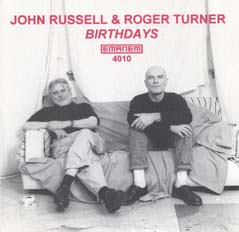 Digital recordings made in London in the Red Rose
by MARTIN DAVIDSON - 1996 FEBRUARY 17
Total time 68:59

John Russell (b. 1954) and Roger Turner (b. 1946) are two of the finest improvisers around, both as soloists and as group members. They are also two of the finest exponents of their respective instruments. Although putting two excellent musicians together does not always make an excellent duo, in this case it certainly does.

They first performed as a duo more than twenty years ago, and have been performing together on and off ever since, often with other musicians added. Their first appearance on record together was on the 1979 trio LP ARTLESS SKY (CAW 001) with Kondo Toshinori, although both had previously appeared on record separately.

Russell first appeared on the scene with a solid guitar and amplification, but soon traded this in for an acoustic guitar. He is, however, far from being inaudible - on the contrary, his sound seems to dominate any group he plays in. This is largely due to his instrument being one of those 1930s guitars that were designed to be heard in big bands before the advent of amplification.

Turner possesses a vast collection of percussion instruments, some of which did not start off as such. Every gig he plays seems to involve a different collection of things, depending on who he is working with and how he feels. On this occasion his "kit" was centred on two bass toms each having a tuning pedal, a small hi-hat and a couple of drum and cymbal stands. On these were placed a continually varying selection of the considerable number of objects that he had on the floor around him.

It should be emphasised that no amplification or electronics is used by either musician. Who needs electronics when one can produce a range of sound as remarkable as this? All I did was place a stereo microphone in front of them to capture their music.

Russell and Turner have played with too many musicians to be listed here, both on an ad hoc basis and in semi-permanent groups - not surprising given that they have been stalwarts of the London improvising scene since the 1970s. They are also working, separately, more and more extensively in various parts of Europe and beyond in various contexts.

"Russell and Turner play 'acoustic' instruments, but this release works because it uses digital recording and the CD medium. It proves that free improvisation was ahead of its time in its conviction that silence and intimate, tiny sounds had a place right next to explosive thunder and death-walls. Improv veterans like Russell and Turner are well situated. They are virtuosi, electrically sensitive to the merest wisp of sound. Their lifelong attention to minute detail and microscopic interaction has produced a truly special art.

This is an astonishing record. Total concentration on the note impinging on the ear in real-time eschews considerations of over-arching structure and the contrivances of modulation. This music arises out of the same drive to articulate the hidden glories of the material that led abstract painters to abandon representation as kitsch, a mere trick better performed by photography. BIRTHDAYS is the aural equivalent to the mind-blowing smears and drips and stains of Asgar John and Willem de Kooning."

"Turner scuttles his sticks and brushes over and inside assorted skin, metal and wooden surfaces. Russell picks, scratches and scrapes his strings and the two combine to make music that is more rhythmic and timbral than tonal. What Kent Carter once called 'insect music'. To lay down in a summer meadow and listen to the insects is to be immersed in a wonderful soundfield, but it would not compare to the variety, skilful manipulation and aesthetic drive of the music here - recorded in the crisp acoustics of the Red Rose Club in North London. This is conversational improvising - fluid tempi, constant rhythmic flux, organic development, constantly spinning off at tangents, sudden silences and a remarkably fast flow of ideas. Beautiful."

"They really do breathe fresh air into contemporary improvisation. These two elder statesmen from London first performed together twenty years ago and have a very unique 'acoustic' sound. Russell plays some '30s big band guitar designed specifically for volume before the advent of electric amplification. Turner has one of the most extraordinary sounding kits, that really needs to be seen, but I can imagine the huge assortment of 'found' objects standing ever so near by. The whole closeness and crispness is so 'there' you'd swear they'd snuck in unnoticed and set up to accompany you while on vege-prep detail. Stop-frame precision is given to the minutely-/microscopically-detailed interplay, complete with anticipated silence, and, as if magically sped up to real time, it makes for some of the most extraordinarily intimate quick-fire virtuosity."

"Overall, Russell, in accentuating the more percussive, or non-tonal aspects of the acoustic guitar, has effectively extended and redefined some of Derek Bailey's ruder mannerisms. Russell's style is, in fact, at this point in time, more rigorously non-idiomatic than that of his mentor. The duo's rhythmic interaction nevertheless owes a great deal to the call/response or 'ping pong' approach favoured by the Spontaneous Music Ensemble and Music Improvisation Company. There's no getting around the authority with which Russell and the richly resourceful Turner duck, dodge, weave, swirl, and often quietly step within and around one another."

"The musical line arises as an act of reciprocity between guitar and percussion, as a sequence of deliberated gestures that unite in the space between the two players. No amount of physical description will convey the experience of listening to it. Depending on a listener's ear and receptivity, it may suggest may suggest a moving itch that needs to be scratched but can't be precisely located, or a textbook on metallurgy that has been translated by a bodhisattva into an unknown tongue, or both. That is, it's an experience that shouldn't be missed."

"[John Russell´s] association with Roger Turner now goes back some three decades. The first of their duo recordings on EMANEM is, for us, one of the finest and most overlooked on the label, a quiet but incredibly intense documentation of two men working together at the limits of their shared understanding."