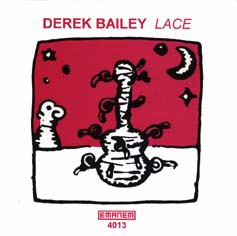 Derek Bailey has played in Los Angeles - that unlikeliest of cities - four times so far: first in 1980 playing duos with Evan Parker at the Century City Playhouse (where I finally met him after a four year correspondence), followed by solo concerts in 1983, then in 1988 and the next year at LACE - L.A. Contemporary Exhibitions - located incongruously in the remote, abandoned-warehouse fringes of downtown L.A. Despite the city's well-earned reputation as one ignorant of / indifferent / immune to improvised music, Derek's concerts were all well attended - stuffed to the rafters, in fact.

For the LACE concert, Derek played his 1936 Epiphone Triumph acoustic, using a cello pickup strapped to the belly of the instrument for some added body-resonance, the amplifying of which he controlled with a volume pedal. The recording quality is excellent, thanks to engineer Jim Lloyd, and guitarist Rod Poole's placing the two microphones close to the guitar, one picking up the string sound and the other pointed toward the loudspeaker.

It was a great privilege to attend this concert, for as you'll hear, this is Derek in peak form - the music is brimming with invention, including some compelling thematic passages that themselves contain playing techniques I haven't heard Derek use before or since - like those chunky, walking-rhythm sequences, with exquisite bell-like high notes ping-ponging off exploratory, mid-range single-note themes, both seeming to gradually approach then mesh into each other - all propelled by a forceful momentum resulting in great moments of musical drama. (That some people can still detect no musical emotion in DB's playing is amazing to me.)

"As time goes on, what seemed hardcore and challenging becomes classic and - in this case, at least - hugely enjoyable. This is lyrical solo guitar with a mathematical rigour that recalls both Bach and Monk. There is an astonishing variety of string attacks; fleet harmonic arguments are concertina'd between shimmering openings-out into suggestive silence and astral twinkle. Bailey waltzes crabwise across the scales, each interval so persistently surprising you suspect he must have developed a seven-fingered hand. Procedures familiar from scored music - retrogrades, reversals, symmetries are piled into the expressionist gestures of a bluesman. Intricately weird clusters sit on top of streamlined escalations."

"Wow! This recording is one of the most impressive Derek Bailey performances I've heard. While the first piece is extremely dynamic and intense, it finds no complete conclusion until after a half hour has passed. But that's fine because one really needs to listen all the way through a session like this to truly appreciate the sublime brilliance of Derek Bailey's guitar playing. On LACE, Bailey winds in and around patterns and sub-patterns, themes and sub-themes on a seemingly boundless whirling and curling path until suddenly the threads come together and explode into a beautiful sonic bouquet. The quality and depth of this recording on a purely dynamic level is extraordinary. It gives further insight into why Derek Bailey is so revered by the avant garde internationally."

"The set two long piece and a short encore offers the full sweep of Bailey, ringing chords, koto-like snaps, and a full-on harmony lesson for the late 20th century. Although he has used electric instruments for concerts in the past, his touch here on the 1936 Epiphone Triumph archtop would shake the rafters, a pure acoustic sound with electronic reinforcement. Emanem presents Bailey in the clearest terms."

"As with a good amount of his documented work over the last decade plus, so-called traditional reference points can be easily discerned. This is especially true here on Place, where overtly melodic and, at times, downright sing-songy phrases and lines, near contemporary folk flourishes, a not-quite waltz, and riffs subversively ingratiate themselves into Bailey's so-called non-idiomatic fabric. Bordered by atypical dodecaphonic-flavoured intervals and lines, heartily underscored by ringing harmonics, roughly at times casually, strummed clusters, crunching percussive gambits; and unself-conscious vocal humming and groans, Bailey's weavings are propelled by fluctuations between more deliberate metric pacing and that of an organic, fluxing nature, and often simultaneous surges of density and volume. Often dismissed as exclusive, this performance clearly showcases the wide, fluctuating expanse of Bailey's universe."

"Bailey's playing is more rhythmically balanced and resonantly spacious on the opening Let's hope we're all in the right place than I'm accustomed to hearing from the man. Towards the last five minutes of this half hour suite Bailey chops and slices his way through the ether like a chef at Benihana butterflies garlic shrimp. Notes and chords are flying left and right in blurry succession, yet somehow they all end up settling exactly where they're supposed to. He proffers a similar governed-build-up-to-head-shaking-climax on We could be here for a few hours that rivals his most accomplished fret dancing - and believe me, that's saying something. Some of Bailey's passages sound so complex that you'd swear he's playing a Nancarrow composition. LACE closes with a short, flamenco-esque tinkler (Which bit would you like again?) that tells the entire story of the Moor's invasion of Spain in a mere four and a half minutes."

"For someone who still seems to entertain profound doubts about the validity of solo improvising, Bailey is sure as hell good at it. To my ears, his solo work is his most compelling, the context in which he's at his most resourceful, where his important and idiosyncratic contribution to guitar music history becomes fully apparent. The two long pieces on LACE are captivating examples of patient, thoughtful development; passing through delightfully tangled, dissonant clusters, and shuffling bluesy 'rhythms', to periods of introspective lyricism."

"Derek Bailey's solo work is so unusual that each recording is cause for celebration. This one is no different, as the improvisations comprising this CD are exquisite testimony to the boundless creative energy unleashed by this master of free music. Recorded digitally from a concert in Los Angeles, Bailey plays his 1936 Epiphone Triumph acoustic guitar with a cello pickup for three numbers lasting nearly an hour. The results are exhilarating, as the guitarist sounds surprisingly accessible and at times almost melodic. Never lapsing into cliché, and eschewing predetermined patterns, this performance bears close analysis and concentration, although it can be enjoyed casually as well. Enigmatically of the moment and timeless, LACE has the feel of artistic invention, the momentum building, a canvas of delicacy melding into intense streams of sound."

"The playing is as warm and committed as ever, with Bailey's pre-war Epiphone Triumph sounding full-voiced and hugely atmospheric."