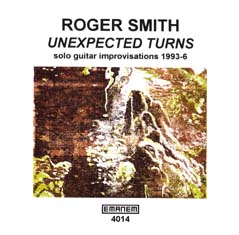 Originating from Ilkeston, Derbyshire, Roger Smith was one of the so-called second generation of British improvisers who came together in London in the 1970s, many of them under the auspices of the late John Stevens and his sessions at the Little Theatre Club. During the 1970s and `80s he worked with a number of artists associated with the early incarnation of the London Musicians Collective (LMC) when it was based in a strange warehouse of a building at Gloucester Avenue, Camden Town. One grouping - The Four Pullovers - comprised Smith, Steve Beresford, Nigel Coombes and Terry Day. The only issued recording was of a trio combo - The Three Pullovers - with Smith, Beresford and Coombes, recorded at the Unity Theatre in 1975 by Martin Davidson and released on the long-since expired Quartz Mirliton Cassette series. In recent years Roger has performed intermittently with Robin Musgrove's ensemble (Together Again, Face-Value Records, 1987) and in a duo with flautist Neil Metcalfe (S&M, Incus CD 24, 1996).

Roger Smith is perhaps best known for his work from 1976 to 1994 with John Stevens' Spontaneous Music Ensemble (SME); a trio which for most of this period also included the great violinist Nigel Coombes and occasional others. In retrospect the longevity of this particular trio seems something of an enigma, given the nature of the personalities involved, Stevens' commitment to other areas of music, and the relative lack of interest accorded the group during its existence, apart from a small hard-core of devotees. Perhaps adverse circumstances and infrequent opportunities to perform contributed to the sense of freshness, nerve-edge delicacy and compressed energy which always seemed to characterise the music. Over a period of 16 years or so a small number of fugitive recordings including the core trio emerged; all regrettably now deleted. Fortunately, the past couple of years have seen the issue of Hot and Cold Heroes (Emanem 4008, 1996): a retrospective collection of performances from 1980 and 1991; and A New Distance (Acta 8): live recordings from 1994, by which time saxophonist John Butcher had replaced Coombes.

Roger's first and, until now, only solo recording was issued by the short-lived LMC label in 1980 as part of an initiative aimed at establishing a collectively-run outlet for less well-known improvisers. The label foundered after only two releases, but Spanish Guitar (LMC 1) remains one of the most subtly fascinating documents of solo improvised music. The most obvious influence on Roger's playing is that of Derek Bailey with whom he once studied; they have also performed together in one of the many short-lived incarnations of the SME. Roger brings his own personal approach to the entirely different Spanish guitar: a mercurial combination of flowing lyricism and disruptive awkwardness, unafraid of exploiting the conventional beauty of the instrument's timbre as well as startling the ear with more abrasive sounds. Name dropping a select few of the host of diverse other figures who have indirectly influenced Roger's music - classical composers, jazz improvisers, blues and soul artists - would be overly simplistic, although it might help dispel the myth held in some quarters that free improvisation is a back-water of self-righteous purity and insularity.

The current selection is taken from a series of recordings made in the kitchen of Roger's flat in Wood Green: hence the occasional extraneous sounds of passing cars, overflying aircraft, sparrows and, on a couple of tracks, the distant wheeze of the central heating on a frosty morning. The fact that sixteen years have elapsed between Spanish Guitar and this release says something both about Roger's retiring nature and the structures and selection mechanisms which so often seem to work against the wider appreciation of some of the most genuinely creative musicians. It is entirely appropriate that this wonderful music should be made available by Emanem, the vehicle by which Martin Davidson has, since 1974, so assiduously documented vital music which might otherwise never have seen the light of day.

"Roger Smith has been massaging those strings of his in the company of some of England's most-talented improvisers for going on 25 years now, yet there are fewer than ten extant 'commercial' recordings in existence to attest to his unparalleled master of his instrument. It's now 16 years since his last solo recording, SPANISH GUITAR, and in my humble opinion, UNEXPECTED TURNS has arrived not a minute too soon. This collection is about as beautiful and engaging as they come. Once a student of Derek Bailey, Smith's playing is far less derivative of his fellow countryman's inimitable style than one might rashly deduce. Smith's playing incorporates strong elements of classical Spanish guitar mixed with an unabashed, primitive string-picking touch not unlike what Fahey has been (re)exploring the past few years. Roger tends to let the lower string and body of his guitar (which he occasionally strikes) resonate, while he employs a more-finger-dampened, staccato attack to the higher strings. Smith also lets loose with a tasteful dose of avant-blues and all sorts of would-be yesteryear song-tore melodies from his own personal fake book. I'd say there's enough substance here for both the 'inside' and 'outside' listener to make UNEXPECTED TURNS a surprise his at your next Friday evening soiree. If the above described is at all inclined to agree with your ears, do yourself a favour and start listening to Roger Smith. If enough of us let him know we're paying attention, perhaps his next solo offing will come before all of us are hard of hearing."

"Though it's not well known, there's more than one great free improvising guitarist in England. UNEXPECTED TURNS, Smith's second solo effort, showcases the extremely unusual vocabulary he's plucked up for himself on nylon-string classical guitar. Jagged arpeggios, aggressive flamenco strumming, brutal or wilfully clunky attack and a deeply perverse sense of humour mean that it's not music for the precious or the faint of heart. But attentive listening reveals a stunning musical intelligence."

"The title is as much as you need to know to understand Smith's conception of music. Each track begins an excogitation which he ponders on, works with and reshapes before a new development takes hold. Soon the piece expands, full of odd accents and startling emphasis. Unexpected turns. Each a passionate, labyrinth argument about a barely remembered subject. Roger Smith has created an unusual, slightly lonely CD, one which is enormously satisfying on an intelligent level while retaining real human warmth."

"It is a relief to hear what Roger Smith is doing here because his approach is unlike other players. It takes a few listens for the bubbling rhythms and melody to stand out from the noises that the guitar is making. Smith's main instrument, an unamplified nylon string guitar seems thin on first listen, but warms up over time. UNEXPECTED TURNS is an appropriate title for this collection recorded in the guitarist's flat in London. At times flaying the guitar then punctuating the sounds with chords and single string lines, Smith produces some very unexpected music, a catalogue of tones from ukulele to plucked cello to the kora. Smith's energetic playing and determined stance pulls a lot of sound out here."

"Roger Smith's solo CD restores power to the note-bend - stretching strings so far that they buzz against the fingerboard and transform the instrument into a sort of percussion set. UNEXPECTED TURNS has all the prettiness of Cage's Sonatas and Interludes but is more sophisticated, especially rhythmically. Sometimes we hear what seem to be spiders crawling cautiously up the fingerboard before being attacked by a cleaning lady with a vicious scrubbing brush. All at a volume level that suggests Audrey Hepburn whispering an M.R. James story into your ear. Smith's respect for pitch organisation gives his playing a dimension lacking in many of his contemporaries.

Whether or not Smith likes John Dowland, I sense an affinity - deep and sometimes painful, untheatrical, finessed music. A master of punctuated equilibrium"

"Now 50, Smith is one of European improv's most inventive (acoustic) guitarists, yet for all his years on the London scene (including a lengthy spell with the SME) he's still its most under-recorded. The 20 home recordings on UNEXPECTED TURNS reveal a kind of cubist sensibility, where one glimpses a motif (pitch/texture-related), hearing it it worked subtly, sometimes savagely, from various perspectives before the bigger picture emerges. A bluesy twist here, a flamenco flourish there. Roger Smith deserves more opportunities like this one to showcase his innovative work. Intricate, delicate, difficult, even unexpectedly humorous, this is a gem of an album."

"British guitarist Roger Smith performed and recorded with the Spontaneous Music Ensemble from 1976 to 1994, but this rare CD is only his second solo recording. Here, he plays acoustic Spanish guitar over the course of twenty tracks recorded at Smith's home. A one-time student of Derek Bailey, Smith has forged his own path, and his precious tone and sense of melodic invention complement his percussive side. While not as startling an individualist as Bailey, Smith nevertheless impresses with abstract ruminations and formidable talent. There is an air of creativity even when he is doodling. With a nod to folk music, another to earthy roots, and a third to free improv, Smith packs a wallop, developing an avant-lyricism that succeeds more often than not."