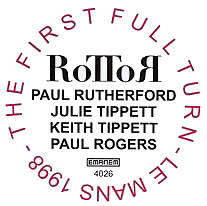 The origins of this remarkable group can be traced back to the 1960s and 1970s. However, a more specific starting point was the Paul Rutherford Trio with Paul Rogers and Nigel Morris, which was recorded at Bracknell in 1983 (Ogun cassette OGC 531). A 1988 duo concert by Rutherford and Rogers was subsequently issued as ROGUES (Emanem 4007) There were also (unrecorded) times when Rutherford and Keith Tippett worked as a duo. Meanwhile, Rogers and Keith Tippett are both members of the co-operative quartet Mujician, while Julie and Keith have been performing together for the best part of thirty years. (Since 1997, all four musicians have also been also part of Keith Tippett's Tapestry Orchestra, which also played at Le Mans.)

The release of ROGUES in 1996 (together with all of the above history) prompted Rutherford to form a trio with Keith Tippett and Paul Rogers. This band went on to play several gigs in various parts of Europe under the title of ROTOR. Rogers was not available on one occasion due to prior commitments, so Julie Tippett was asked to make up the trio. Rutherford was so impressed by her performance, that he asked her to join the band and make it a quartet, with the group name changing from ROTOR to ROTTOR (without any change in pronunciation, please).

The Europa Jazz Festival du Mans concert heard here in its entirety was the first performance by this quartet, although it sounds as if they have been working together for a long time. But then they are all seasoned improvisers.

The other performance on this CD is Rutherford's solo contribution to a concert held a couple of months earlier - part of the Tradition and Innovation festival in a large London church.

"Rottor is a quartet in which each member contributes equally and listens very closely to timbre, sound, rhythm and intonation. The First Full Turn is nearly an hour of live performance, but it keeps the listener glued to their chair because it continually surprises. Julie Tippett's voice is a second horn that has never been better. She can be simultaneously operatic, nonsensical, and exalted, or even sad and quiet. Her husband, Keith, regales in variety too, and whether he picks at the keyboard or trumpets blasts of sound, he always fits. Bassist Paul Rogers is a long-time collaborator of Rutherford's, and while he sometimes plays 'in your face', he often chooses a subtle complementary role. Together, these four make music of the highest calibre, music that thrills, where voices fade in and out and combine in unusual combinations, where technique is spectacular, but never on end, and where sensitive arpeggios peacefully coexist with unfettered booms.

Another Solo Turn is Rutherford by himself, recorded live in a church, the resulting sound echoing in resonance. Rutherford is one of the few trombonists who can sustain interest by himself. He does this by rarely falling into patterns. The listener is kept off guard, with the trombonist's bag of tricks never exhausted. While his attack and slurs might offend some trombone perfectionists, it is precisely these aspects of his playing that enthral."

"This beautiful recording is made of one continuous 53 minute improvisation. It starts a little erratically as the musicians search for a way to lock together. It happens after a few minutes when voice and trombone engage in a dialogue. Highlights are provided by the chemistry between the Tippetts: they suddenly land on a blues theme here, soar to frenetic improvising there. 35 minutes into the piece the pianist lands on a delicate nursery rhyme-like melody everyone will enrich. A solo trombone improv recorded two months earlier has been added to round up the CD. That concert took place in a more reverberant hall and the trombonist plays around with echoes of himself -- a worthy addition."

"All too often in an improvised setting, the utilisation of a vocalist can make for a dreary session. For whatever reason, whether it be lack of structure or just the dynamic of the voice, most vocalists gravitate towards the centre of attention. Of course, such an occurrence undermines the integrity of a collective improvisation. Fortunately, neither Julie Tippett nor the group Rottor allow for such a disaster, owing as much to the vocalist's keen sense of palette, volume and theatrics, as it does to the ability of the quartet's members to coexist. Perhaps this can be attributed to the fact that Keith Tippett, bassist Paul Rogers, and trombonist Paul Rutherford are seasoned veterans who rarely have difficulty figuring out where they fit into the picture. Keith Tippett can coax a vast sound-world from within the piano, whether it be a rumbling bass register, knotty prepared piano, or delicate lyricism, the speed with which he adapts, and his intuition keep the piece afloat and inventive for nearly an hour. Similarly, Rogers guides the piece in an unassuming fashion, as his rich bowing or responsive pizzicato shapes offer the group a wealth of paths to choose from. Rutherford's trombone work is nothing short of formidable, and his work with both the quartet and Another Solo Turn, a solo tour de force, continue mining the vein he began tapping into on the early seventies' seminal GENTLE HARM OF THE BOURGEOISIE (Emanem 4019). Rutherford alternates fragmented bleats and blats with unusual voicings, or fully developed long tones and slides. Together the quartet creates music with constantly changing landscapes, with each player finding an integral part in determining the shape of the improvisation."

"Paul Rutherford is the great innovator of the trombone: his GENTLE HARM OF THE BOURGEOISIE (Emanem 4019) is described justly (on the CD sleeve of this disc) as 'the definitive solo trombone record'. On THE FIRST FULL TURN Rutherford is joined by vocalist Julie Tippett (who has brought along her thumb piano), her husband, pianist Keith Tippett (who also plays bells and maracas), and bassist Paul Rogers. Those who missed GENTLE HARM can also get a taste of Rutherford's solo technique on his twelve-and-a-half minute trombone solo Another Solo Turn, which serves as a coda to the quartet's fifty-three minute improvisation, The First Full Turn.

As might be expected, The First Full Turn runs a gamut of emotions and textures. Julie Tippett has a remarkable voice which she uses like an instrument, matching Rutherford's growling trombone or taking manic (and highly virtuosic) solo flights while Rutherford and Keith create contrasts in lower registers. She can move at tremendous speed - and provokes Rutherford, K.T. and Rogers to do so as well - or work in long tones that cue the instrumentalists to lower the volume and intensity. She can growl and twitter in ways to which we're accustomed from horn players, but not from vocalists. It is a tremendous, fascinating performance from beginning to end, showing off not only Rutherford's tremendous colouristic and improvisational ability, but also the considerable skills of Julie Tippett.

Another Solo Turn, recorded almost three months before The First Full Turn, is no throwaway. Rutherford has a huge range of expression on his trombone: he can match Roswell Rudd's smears and wails just as easily as J. J. Johnson's smooth precision. By the nature of the case he tends more toward the former than the latter, but he has such a range of expression that he never fails to hold interest. Recommended."

"Some argue that too often vocalists tend to dominate improvised encounters and make the musicians seem like a backing band; but I'm sure that it is in part a matter of habit, the ears focus on the voice, particularly if it is as spirited as Julie Tippett's. As one part of the quartet Rottor recorded live playing one long piece, she is the ineluctable locus of attention primarily, I think, because something very basic in us responds to the voice's naturally encoded expressions. Her voice becomes a healing linctus in agitated contexts or a disturbing source of dissonance beyond the reach of consolation. It is saying much about the other three musicians to state that they are as good as she is."

"The musical language, timbral experiments and structures employed will be familiar enough to seasoned improv listeners, but they will find plenty of mileage within them. The ensemble sound is generally spacious rather than dense, with Julie Tippett's typically wide-ranging vocal - traversing whispered staccato scurryings through to mock operatic yelps - and Rutherford's trombone emerging as the prominent voices. Rogers is as inventive as ever on bass, while Keith Tippett plays with great restraint, making his stormier interjections around the half-hour mark all the more effective. The piece seems to fall into silence around five minutes later, but the pianist introduces a new chain of thought with a simple melody figure, and sets the hare running again, culminating in a long, ecstatic finale."