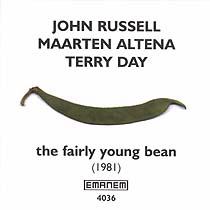 On a visit to England in 1981, Maarten Altena was reunited with John Russell and Terry Day, and as a trio they did a couple of concerts in Bristol and London, then went into a studio and recorded the music heard here. It was supposed to be on the third CAW LP, but has not seen the light of day until now, since only two CAW LPs were issued.

This CD contains all the music recorded at the session in the order of performance. Since the original intention was to make an LP, there are several instances of reworking the same material - alternate takes, as it were. The complete sequence, which just fits on a CD, makes for fascinating and enjoyable listening.

Russell and Day had known each other ever since Russell arrived on the London improvising scene as an electric teenager some eight years previously. They initially worked together in Mal Dean's Amazing Band and Day's Free Space, and continued to cross paths in other improvising groups.

Altena and Day both go back, in their respective countries, to the early days of free improvisation in the 1960s. From about 1977 to 1981, Day was the percussionist in Altena's group K'Ploeng, and also in his trio with Maurice Horsthuis.

Russell and Altena met a few years previously, and in 1980 they worked and recorded together in one of Günther Christmann's VARIO groups. At some point they had engaged in some banter about Dutch and English colloquialisms. Russell mentioned the expression "old bean" causing Altena to come up with the title for the album.

"With this release, Emanem has done it again; dipping into a seemingly endless supply of unreleased goodies and unearthed another gem. Taken from a 1981 studio session, this disc is a vigorous example of so-called "insect music" at its best. Those familiar with bassist Maarten Altena's more hard-boiled intricately composed offerings on Hat Art will find this disc a revelation. As an improviser, Altena is anything but tentative, heard here as a buzzing epicentre to the textural chicanery surrounding him. With bow in hand, Altena scrapes, scratches and sings his way through these improvisations with a sense of urgency; wrestling with Russell's skewed guitar lines and the omnipresent chatter of Day's percussive volleys, or serving up temperamental patterns that jolt the trio in another direction. Guitarist John Russell is a textural madman, alternately spinning out clanging runs, percussive plinks and prickly asides that give the impression of a six string being attacked with a rake. Percussionist Terry Day is rarely represented on disc and this recording remedies this oversight, finding the drummer in good form, bringing along an abundant supply of offsetting pulses and demonstrative assertions to go along with the rickety racket of his colleagues. This is improvisational music of the highest order, twenty-six succinct snippets that bristle with energy and nuance. Deep listening will reveal a world of complicated conference beneath the gestures, a method to the madness as it were, not to mention a few surprises each time out."

"Emanem frequently makes the past of improvised music and the present richer by issuing sessions that musicians have long had on their shelves. THE FAIRLY YOUNG BEAN is an ideal example. The group maintains lovely balances of empathy and abstraction, the casual and the taut with Altena offering more traditional linear invention, while Russell's scrabbly, wiry, metallic play is a lovely interzone between Altena's stringiness and Day's anti-patterns. Many of the pieces are miniatures, but it's the longer pieces that emphasize the group's cohesiveness and its knack for sudden evolutions."

"Emanem have systematically rescued some wonderful music from oblivion, and this example is superb. This trio recording is in the close-captured, intricate, intimate and highly complex style which perhaps was typical of the time, at least insofar as it was then still possible to attend performances of improvised music which didn't rely on abused samplers and MIDI triggers built into improbable objects. Rather, this music is about exploring the innermost capabilities of conventional resources, with Altena often favouring the top end of the instrument, Russell shuffling defined notes and muted scrabblings like a deck of cards, and Day rustling and pattering with a seamless deliberation. The interaction thoughout is wire-taut, lending itself well to the hit-and-run nature of these 26 very short tracks. Buy this CD at once."

"The session is presented in its unedited entirety, and is classic Anglo-European improv of the tinily-gestured scurrying variety: all three participants maintain a barrage-like dialogue of chirps, squeaks, plinks, plonks and bonks through several short, miniaturist improvisations. This evenly-balanced group has a flitting, skitterish dynamic, which periodically comes to sound more anchored when the pace of the playing slows, or when, for example, Altena switches from bowing to plucking his bass. They regularly reach mini-climaxes of scattering peripheral sound, but the emphasis is always on a constantly bubbling and chatty patter, which illustrates a quietly unflashy and intensely focused form of democratic group interplay."

"John Russell studied guitar with Derek Bailey, but is his own man. Eschewing intervallic leaps and dialogic discord, Russell cultivates an ensemble flow. He sets up repeated figures that suggest spaces for his accompanists, then contrasts them with squeaks and chimes. Maarten Altena is busy on cello and bass, his line humorous, yet clean and abstract. In the right circumstances, Terry Day can drum with delicacy and logic. A homely feel replaces the strenuous apocalypse of the improv pioneers. A manifesto for the virtues of free improvisation, and a delightful listen."

"Recorded in 1981 but not released for the first time until 1999, this album may shock those who are unaccustomed to the severe abstraction of guitarist John Russell's style. Nonetheless, Russell can be, as he is here, an absolutely remarkable performer. The trio format suits his improvisations well, as the incredible diversity over the course of 26 tracks (averaging just over three minutes each) splendidly displays. A rare appearance by Dutch bassist Maarten Altena (who doubles on cello) is particularly attractive, and the two strings are perhaps a precursor to some of the recordings made by Dominic Duval and others in the 1990s. Percussionist Terry Day rounds out the group with a non intrusive, though appropriately aggressive thrust that blends in the mix. Overall, this is a thoroughly engaging and delightfully different release."

"The lyricism (one could even say 'romanticism') of Altena's bass playing was not an obvious partner for Russell's contorted lines and Day's unstable outbursts and John Stevens-like economy of means. Yet, the three of them meet somewhere in the middle, with the guitarist taking a little more room - a good thing since this turns out to be one of his best recordings."

"This string/percussion trio explores textures on these twenty-six brief tracks.

Eschewing melodic and rhythmic continuity, John Russell (guitar), Maarten Altena (cello, bass), and Terry Day (percussion), build up small clusters of sound in these small spaces, relying mostly on the percussive possibilities of each instrument. Occasionally, however, Russell coaxes some clear bell-like tones from his guitar, and Altena picks up the bow, and the proceedings become a bit more immediately accessible.

But that isn't to say that for the most part this is utterly forbidding stuff. Its logic unfolds as one listens closely. The small palettes afford room to explore all kinds of sonic adventures: Age for Retirement pits the highest-pitched squeaks against low bass scrapings; Emphasis veers toward almost country guitar without ever skirting into tonality, as Half a Nicker toys with classicism; Cue for Something has a stentorian drama and air of announcement (but indeed, for what?); and so on through the disc.

Thus for the adventurous, THE FAIRLY YOUNG BEAN will be full of realized possibilities."

"It’s always interesting to hear new (to me) combinations of players. The music here is released for the first time ever, and it is the complete eighty-minute session in order of performance. There is a flow here that makes the complete excursion sound like a suite, although I have no idea how many breaks were taken between any of the tracks, which rage from twenty-three seconds to eight minutes, most on the shorter side. At the beginning, most of the pieces are very busy, pointillist, not soft, and exciting. As the session goes on, a coherency more akin to composition seems to appear, although these pieces too are freely improvised.

The disc at hand contains free improvisations, and the interesting thing is listening to a session which starts great build in telepathy and coherence to the point of not just the unity, which was always there, but a feeling of group composition. I’m familiar with and enjoy Altena’s work from his many hatHut discs, which are mostly composed. Russell’s guitar, totally active and engaged with the other two, is not as isolated as a typical Derek Bailey duo or trio might be, that is to say, overlapping and attuned but still more in his own (interesting) head than submitting to the power of a group of like minds. Russell here is part of the family. Day slaps, twiddles, rattles and strokes his instruments and is very busy, but does not give the impression of just trying to fill the space. His varied instruments, not listed here, are all used to great musicality and flow.

Another winner from producer Martin Davidson. If I had heard this disc earlier, it might have appeared on my 1999 Top Ten."

"Most of these pieces are miniatures, beginning with the appropriately titled Aphorism. Russell and Day, in particular, prefer to work in an aphoristic manner, concentrating on the smallest of musical gestures, micro-managed sounds that self-consciously abjure any reference, influence or narrative. As ever, Russell sticks to his acoustic, clearly delighting in the sounds and textures of plectrum against nylon string, of buzzed and serrated chords, or of the thump of the wrist against the guitar's body. Day works in the same sonic territory with his percussion, providing a contrastive commentary to Russell's pointillism and Altena's more evidently expressive voice on cello and bass. This is actually a fascinating chance to hear Altena in a purely improvisational context, before his turn to long-form composition and arrangement. His tendencies in that direction are clearly obvious - particularly on longer pieces like Tea for Three, Emphasis and See for Yourself, where his long, sensuous arco lines achieve a kind of dramatic tension with the fussier playing of Russell and Day.

There is no dominant voice in these improvisations, and they resist any musical hierarchy. Where they succeed best (the hyper-kinetic See for Yourself, the almost lonely spaciousness of Hell for Leather, or Age for Retirement), the level of musical communication is quite high, for whatever the minor aesthetic differences the players ultimately result in a compelling mix of styles that serves the improvisation rather well. Indeed, the charms of this date might be directly attributable to this contrastive approach (very audible on Euphemism and Over the Top, where Altena's romantic arco cuts a swath through the hardscrabble minimalism of Russell's harmonics and Day's desultory percussion). Only on two of the longer pieces (Emphasis and Half a Nicker) does the group work close to conventional harmony, at times playing with a loping pulse, then pulling at a half-step interval.

This music is a worthy document of high-level European improvisation."

"There is a great deal of scuttling interaction and almost all of it at a low volume: it's very easy to drown John out, and playing companions usually defer to his situation. Altena always finds the humour in such settings and, in their dry way, the 26 tracks field a lot of wryly amusing happenings."