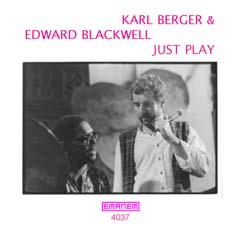 In 1975-6 I was living in the Catskill Mountains near Woodstock , and was asked to record all the concerts and some of the workshops at the Creative Music Studio. It soon became obvious that Karl Berger, the prime mover of the school, was an exceptionally fine musician who was sorely under-represented on record. I heard him play in many settings, with the music ranging from hard-driving free jazz to rhapsodic romanticism.

My greatest pleasure from that period, however, was seeing and hearing Blackwell, who was surely one of the very greatest jazz drummers. Like other greats - Max Roach particularly comes to mind - he appeared to be completely relaxed when he played. It looked as though nothing much was happening, but sounded like everything was happening. As well as being a most swinging keeper of the time, he was also a most inventive and melodious soloist - hear his Osi-drum solo at the start of Wood and Skin Works, for example.

When I heard that these two were doing a rare duo concert in Albany, I was determined to record it. The musical proceedings are complete on this CD in the order of performance, except that the opening Balafon Samba has been shortened by about three minutes. The two longest pieces, with their unique sound - mainly of wood - were improvised based on one of the musicians setting an initial groove. The other - mainly metallic - duos were based on tunes composed by Berger over the years.

When I was preparing the original LP release of this music, I asked Blackwell whether he preferred to appear as "Ed" or "Eddie", since both were used on his previous records, and in daily life everyone (including his wife) just called him "Blackwell". He replied that his name was "Edward", and that he didn't like the shortened versions that had been foisted on him after he left New Orleans.

On a recent visit to the USA, I had the pleasure of meeting up with Berger again after all these years. (Alas, it was a few years too late to see Blackwell.) We decided that this music should be reissued as it was so good, and as it was the only published recording of the two of them as a duo.

"This is music that deserves to be heard more widely than I imagine it will be."

"It's a shame that the European pianist and vibes player Karl Berger is still unknown outside a select hard core of improv fans. Yet he cut so many killer sides and was in the thick of the action throughout the '60s and '70s, recording an ESP Disk in '66 (FROM NOW ON) and touring with Don Cherry before appearing on the trumpeter's epochal SYMPHONY FOR IMPROVISERS. As a pianist he can get pretty hysterical, but his vibes playing is deeply satisfying, picking out speed-blurred melodic lines with the ever-evolving logic of a saxophonist taking a solo. There's still plenty of bop in the way that Berger bounces and swings but it's all cut with a vague 'world' sensibility, lending his graceful arcs a real earthy undercurrent.

The late Edward Blackwell was the greatest drummer Ornette Coleman ever worked with and he was always more about movement and rhythm than abstraction. Alongside Charlie Haden he kept Ornette's music tough and visceral and he works a similar magic here, pushing each track relentlessly towards the horizon with a full kit augmented with a slit-drum. Berger also utilises an African xylophone and a darbuka and at points it sound like some of the areas that William Parker and Hamid Drake set out to explore on their duo album on Aum Fidelity, as wood and metal thump and kling-klang together. As well as re-visiting some of Berger's own back catalogue (Steps comes from his ESP album) the duo also tackle a previously unissued track by Don Cherry, South Of Imperial, a magically evocative visualisation of the area Cherry grew up. It captures the mood of the disc perfectly - a wistful nostalgia cut with some exhilaratingly progressive blood and fire - and leaves you lamenting the fact that this fantastic tag-team didn't leave behind any more recorded evidence."

"Listeners familiar with Berger and Blackwell who arrive at this recording expecting a straight collusion of drums and vibes are in for a joyous surprise. Those unacquainted with either man are even further fortunate for their ears will greet the music free from preconceptions. Both groups will walk away with a fathoms deep appreciation for how far beyond their expected instruments these two travelled together. It's true that Berger was known foremost as a vibraphonist and Blackwell made his most publicized musical impact as a jazz drummer. But the larger reality, as profoundly uncovered by these recordings, suggests that their talents and interests encompassed far more than these roles alone. Due in part to the guiding influence of Don Cherry, whose mid-1960s group was the impetus for their initial meeting, their shared musical canvas was expanded to one of global dimensions.

During this concert, miraculously captured by Martin Davidson in the spring of 1976, the pair accords a pan-percussionistic approach that recasts both their personas and their instrumental voices. In tandem they open up a shared universe of seemingly boundless rhythmic possibilities and thanks to this valuable document we are all invited to join in the journey. In addition to the customary vibraphone and drum kit a modest array of African percussion devices are employed on several pieces (Balafon Samba and Wood and Skin Works) and it's these instruments that truly make the difference in the performance. All of the voices are acoustic. Even the vibraphone is pared down into an acoustic incarnation sans electric fans giving it a xylophone-like sound.

The opening Balafon Samba builds and recedes for nearly a quarter hour as Berger and Blackwell exchange a fluid discourse of rhythmic lines on their respective wooden instruments. The appropriately named Steps builds from an ascending and descending scale of notes by Berger as Blackwell's brushes spread a sumptuous rhythmic salve beneath. On Wood and Skin Works balafon and osi-drum trace a nimbly rendered dance of repetition that makes graceful use of the resonating properties of each. Throughout all of the pieces a beautiful confluence of direction and intention is maintained. Each improvisation, though deceptively simple in terms of instrumentation, cloaks a menagerie of rhythmic layers and listening to these striated sound sculptures soothes and incites rumination at the same time. Rarely does one encounter music that balances unadorned and spontaneous beauty with a degree of supreme subtlety that assures the secrets surrounding it's intricacies will resist absolute disclosure and continue to invite limitless listenings. Make no mistake, this is such music, and it deserves immediate and undivided attention. Thanks are in order to Martin Davidson for being at the right time and place to preserve it."

"Percussion lovers, open your ears! JUST PLAY was first released on LP in 1979 on the Quark label and had been out of print for ages. The British label Emanem delivers a new edition with one extra cut (a five minute Don Cherry tune).

Karl Berger is a master of the vibraphone, but he also touches balafon (an African xylophone) and darbuka on this recording. Edward Blackwell was a drummer with great talent but sadly under-documented. Here he also plays osi-drums. These two percussionists met in the mid-1960's, when together with Pharoah Sanders they were in Don Cherry's band. JUST PLAY seems to be the only recording to document this duo.

This is not free jazz in the strict sense. The music remains well organized and firmly anchored in the jazz tradition. Of course, the vibraphone (and the balafon, for that matter) is now an instrument with which you can experiment a lot on noises, split-tones and other techniques that are now clichés in improvised music. Therefore, the music here, although it feels freed from the concept of tonality, remains 'musical', even melodious and Blackwell's drumming always keeps a groove, something strongly in evidence on We Are. Some light jazz, relaxed, delivered by two great percussion players who were two of the very few jazz musicians to use African instruments in 1976, the time this show was recorded."

"Essentially these duets provide yet another glimpse of Blackwell’s uncanny melodic inventions and unwavering discipline behind the kit, as the drummer sings a song or tells a story behind each manoeuvre and meshes nicely with Berger’s improvisations, tonalities, jazz-based themes and world-beat style rhythms. Overall, the two musicians exhibit their respective wares in laudable fashion as JUST PLAY provides enough lustre and excitement to sustain interest and serves as a noteworthy recorded document for the admirers of these two master craftsmen."

"You hear that a record's on Emanem and you expect uncompromising improvisation. You hear that a record's a percussion duo and, unless you're either an unquenchable optimist or a drumming fanatic, you expect an exercise in traded licks and patterns that compels the participants far more than anyone who might actually listen to the thing. This CD douses expectations with a fine driving rain of great and thoroughly accessible music. Admittedly there's a limited sound palette but it's nonetheless an exquisite ear-tickler. Berger's since established himself as a string arranger; this might help to explain the rightness of his unerringly placed mallet beats, and also why the finely detailed melodies he brings to this performance so generously award attention. If he played a horn instead of the always under appreciated vibes, these tunes would probably be widely covered. And what can you say about Blackwell? Did he ever not sound good? He's in superior form here, knocking out stark vivid slit drum tattoos on Balafon Samba and shadowing Berger's lines with equally melodic snare and cymbal strikes on We Are."

"Five of the tracks are for vibes and drum kit, but the longest and most adventurous compositions (!) are for African bala(fon) and osi- or slit drum. The two pieces, Balafon Samba and Wood and Skin Works, occupy almost half the record between them. The shorter tracks are more dynamic but don't capture the same, almost hypnotic, quality. Blackwell is in great form, perfectly in balance with Berger's own delicate touch."