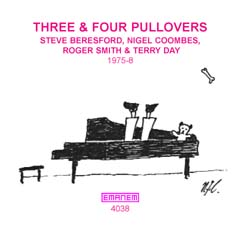 “To very much simplify, it’s a cross between an SME tiny-elements-interlocking-thing and an AMM landscape.”

The Four Pullovers was a somewhat occasional group that lasted from around 1974 to 1978. At times, Terry Day was unavailable, so the group became Three Pullovers, as on the first session heard here. This very fine 1975 trio session is heard complete. It sounds like nothing that had gone before, which is particularly remarkable when one considers that it was one of the earliest recorded examples of each of the musicians. Steve Beresford mainly performed on toys, including some amplified toy instruments; Nigel Coombes enhanced his violin with what he described as “low grade electronics”; and Roger Smith played an unamplified guitar.

The remainder of this CD features four extracts from what was probably the last concert by the Four Pullovers. Not all of the performance was recorded, and not all the music was up to scratch, hence these excerpts. By 1978, Nigel Coombes and Roger Smith were members of the Spontaneous Music Ensemble, whilst Steve Beresford and Terry Day were headed for Alterations. This time, all the musicians only used unamplified instruments, except for Beresford who also played some amplified toy instruments. These excellent excerpts are the only recording of this quartet to have been published.

"This music is a more ‘related’ extension of, say, the work of Bailey-Parker or Parker-Lytton, and it seems to be moving quite beyond that. A great wash of sounds is produced, like the sound of a huge percussion orchestra, as all three transform their primary instruments (violin, guitar, and ‘toys’) into percussives. Though Coombes is perhaps the ‘lead’ voice, Beresford keeps the whole thing going with his array of whistles, raspberries, toy pianos, and what not. Smith’s playing, perhaps the most ‘traditional’, is extremely subtle. Actually, the music moves three ways at once, with each player fronting a direction. One especially notices this when one of the members stops playing momentarily, and a duo is left. It is very enjoyable to listen to this music as it gathers momentum in certain areas.

The importance of Beresford’s playing cannot be overstressed, this being the most percussive instance I’ve heard, as it is a continual setting-up and dismantling of musical situations which the other players may or may not respond to. The fact that the music is a strong piece attests to its underlying concept and ‘wholeness’, especially in the light of the three unique talents involved who sometimes play tangential to each other (although in no way ‘against’)."

"Really choice documentary uncovering of this sadly obscured London improv ensemble, operative between 1974 and 1978 both as a trio - Steve Beresford, Nigel Coombes and Roger Smith (Three Pullovers) - and as a quartet (Four Pullovers), when Terry Day was available. They only ever released one limited Three Pullovers cassette, which this reissues, along with half an hour's live Four Pullovers recordings from May '78.

The cassette material is a trio recording from January '75, and really does reveal these guys as a uniquely pioneering tiny-sound improv outfit, one which took the more outre early '70s peregrinations of the SME and the Parker/Lytton d uo and skewed them in any number of different directions. The two pieces - 27 mins of Sea Of Mice and 18 mins of The Butter Situation - are both brilliantly obnoxious collective barrages of frantic tiny sound clatter, heavily peppered with every imaginable variation of scratch, scrape, squeak and squeal. Their interaction is, for the time, quite unusual, in that it eschews the acutely responsive dynamics of their peers in favour of curiously oblivious, almost accidental interplay: at points they don't seem to be listening to each other at all, but then cohere at the exact moment one would least expect them to. Beresford - on 'toys, electronics, etc' - is the most active of the three, maintaining a constant percussive racket, and engaging most readily with Coombes, who saws away sharply, fracturing his playing by feeding his violin through 'low grade electronics'; Smith, on acoustic guitar, meanders about the periphery, occasionally making a well-timed dive into the melee.

The '78 recordings at points - the last half of Collision Specialists especially - display a similar frenetic, scrabbling interaction, but temper it with a slower and more amiable sense of quartet drifting. The instrumental balance of the group had by this point evidently changed, with Coombes now focusing on melodic, mellifluous bowing, aligning himself more with Smith than Beresford, and dividing the group somewhat in the process. Day (percussion, alto, cello, mandolin) flits between the two sides, periodically interjecting - with not a little glee - sudden bursts of volume and noise. Like Incus improv shrunk and refracted through a cracked mirror, this is bewilderingly miniaturised and condensed music, reeking of beautifully primitive, raw DIY invention and freedom."

"Given the benefit of hindsight, this aggregation had really been up to something wonderfully esoteric, as these two concert recordings suggest a rough, early example of what would now be deemed electro/acoustic improvisation. Steve Beresford acts as the music's electronic element; tirelessly raisng hell on a hodgepodge of unidentifiable sound sources, when not tweaking the piano or euphonium. By today's standards Beresford's electronic chicanery would be considered crude, but nonetheless, in this context 'low-grade' electronics are appropriate, and he sounds quite forward thinking as his disruptive percussives and sculpted sounds muddy the waters. Not that violinist Nigel Coombes or guitarist Roger Smith are playing it particularly straight, as they are equally inclined to stir up a complicated racket. Smith largely lingers in the background, opting to persevere through subtle, atmospheric runs, or partaking in some fervent textural forays though abusive string scraping. Coombes vacillates between volleys of fractured tones and more abrasive offerings in which Beresford's maniacal musings are matched with grating strikes of the bow. The latter concert adds Terry Day to the fray, with the results being no less twisted, but perhaps a bit more dense and succint as if the passing years had caused each member to be more direct in their assertions. This is especially true of Coombes who can be heard soaring about where his sound was more fragmented on the early concert.

What makes this music so subversive is that there is a blatant dismissal of obvious rhythmic or melodic content, yet it ebbs and flows naturally and organically based purely on the direction any of the participants feel like pursuing. This music has aged well, and over two decades later it is easily as vivid as any of the electro/acoustic being created today, and is generally speaking far less pretentious."

"Part archival release and part reissue of an obscure 1977 cassette, THREE & FOUR PULLOVERS is early documentation of free improvisation within the range of 'small' sounds. A timely release, given the recent proliferation of improvisers working within the genre.

The two concerts heard on the recording date from 1975 and 1978. The first (Three Pullovers) reveals, within the context of a fully developed group, formative experimentation into a heretofore unfurthered subspecies of a musical idiom. Unlike the common AMM lineage of magnified gestural abstraction, Three Pullovers make small textural sounds with acoustic instruments (excepting the occasional amplified toy or cheap piece of electronics) and leave the sounds produced in their diminutive size and form. The results are inevitably percussive and far removed from the hugely amplified monochromatic canvases and/or silence-based use of small sounds now current. The subtle clatter of rough hewn tones throughout sound unabashedly 'made', with the emphasis seeming to lie more on the creation of sounds in the present than their examination

The second concert (Four Pullovers) displays slightly extended interests within the group. Rather than using the violin only for percussive effect, whole lyrical string passages are heard subtended by a clatter of toys, electronics, alarm clocks, etc. The slightly larger sonic palette allows for a combination of elements that could not materialize in the first concert and the attendant synthesis of clatter and lyricism can be nearly alchemical (see the alarm clock/euphonium/violin passage in Collision Specialists). An appealing alternative to the often ascetic use of small sounds."