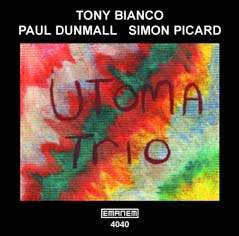 In the last years of his life, John Coltrane was using the drums as the predominant instrument in his performance, playing with two or more drummers at once or just dueting with a drummer. In the Utoma Trio I have the opportunity to explore this concept explored by John Coltrane.

Our only direction during this recording was to improvise for a half hour, for ten minutes, then try for another half hour. The friendship between Paul and Simon made things easy - at times they just sound like one player covering the full range of the tenor saxophone. The two sides of the same coin complementing each other perfectly.

The intensity of the recording comes from the profound belief and commitment to this music by all on board.

Paul Dunmall and Simon Picard have been stalwarts of the British and other scenes for decades.

"UTOMA TRIO numbers among the essential tenor trio projects of this period."

"The trio is superb, with two tenor saxophones pitched against the drum kit. It falls into a continuum of Dunmall records that represents one of the most stimulating saxophone documents of recent times."

"Drummer Tony Bianco's resume reads like a laundry list of disparate musical talent. Here's a man who has performed with rock and rollers Chuck Berry and Edgar Winter, modern jazz bassist Reggie Workman, saxophonist Dave Liebman and many others. However with this release, the drummer along with tenor saxophone titans Paul Dunmall and Simon Picard derive inspiration from John Coltrane's free-style explorations

Tony Bianco's UTOMA TRIO is all about raw firepower and unrelenting energetic spirit! The first piece, Oceans In Space presents the listener with twenty-five minutes of viscous soloing and scintillating improvisational speak, thanks to the stylistic inventions of the saxophonists who exhibit intuitive call and response dialogue at an often-torrid pace while the leader provides a mini-clinic on the art of free-jazz drumming. Throughout, Bianco renders a rock solid and changeable pulse yet multitasks his rhythmic inclinations while pushing and prodding the dynamic twin sax attack into uncharted regions of sound; although the band alters the momentum with poignant lyricism and effective use of space on Labyrinths. The tumultuous choruses continue on the final piece, White Eagle as the musicians exhibit unimaginable stamina in concert with climactic developments, cunning interaction and the soloist's faint injections of melody and meticulously constructed fabrics of sound. Hence, a mind-blowing modern jazz/improvisational extravaganza it is! Strongly recommended."

"I hadn't heard such powerful and engaging blowing in a while. Three jazz musicians going at it together, pushing each other off-balance, playing with each other for an hour, putting their guts in their instruments, playing with as much energy as possible. Sometimes, that¹s simply what free jazz is all about. And these three deliver a magical moment. Centre stage is the under-documented drummer Tony Bianco, a busy player unconcerned with extended techniques. He hits often, everywhere, but always remains within the jazz idiom. Left stage is tenor saxophonist Paul Dunmall, a fiery musician who can deliver great energy when at his best. Stage right is Dunmall's friend Simon Picard, another tenor. Both share the same language partly inherited from Coltrane. UTOMA TRIO is another take at the sax/drums face-off exemplified by Coltrane and Rashied Ali (Interstellar Space). A 10-minute track is squeezed between two half-hour improvs - a good idea as it lets the listener rest a little. Bianco is unstoppable, while tenors trade solos or engage in battle. It could have been tiresome but it¹s not: the level of intensity translates into excitement and the listener comes out of UTOMA TRIO flushed but happy."

"In the post-INTERSTELLAR SPACE cosmos of improvised music any sort of drums-saxophone pairing is bound to draw comparisons to the seminal date by John Coltrane and Rashied Ali, and the timeline for the music could forever hence be cleanly be divided into pre- and post- periods. The UTOMA TRIO, while expanding slightly on the instrumental template pioneered by Trane and Ali through the addition of a second tenor, makes no excuses for this conspicuous source of inspiration and instead embraces and builds upon it.

Favouring the long-form in their trio improvisations, the three men make maximum use of the space and dimensions afforded by their set up. The recording adds further to the sense of space by filtering their horns into distinct channels for easy comparison and contrast and depositing Tony Bianco concisely at the center of the configuration. Unleashing what quickly seems like a bottomless geyser of cymbal, snare and tom patterns, Bianco's improvisations are largely vertical - standing in contrast to the saxophonists' dual inventions, which branch out in radiating knots and streams. The pieces work much like the sonic equivalent of a hurricane's anatomy with Oceans In Space and White Eagle awash in relentlessly swirling activity and funnelling intensity, and the nuclear Labyrinths serving as the comparatively calm eye of the storm. The differences between the saxophonists in terms of technique, tone and expression, while readily evident in the stereo separation of the recording and in the sections where one or the other lays out to leave his comrade to go it alone, eventually become subsumed in the forward momentum of their shared release. Bianco seems similarly bent toward such conquests and maintains a stamina and sustain behind his kit that in turn fuels his partners' unremitting exclamations. The effect is ultimately somewhat exhausting, especially over the durations these men are dealing with, but at the same time wholly appealing and absorbing.

Strangely, for all the strength and energy expended, both players largely eschew extended techniques choosing instead to trace vermilion lines out of a molten melodic core. Cleanly articulated phrases take the place of split tone shrieks and multiphonic screams and each man makes the most of the tonal properties endemic to his respective tenor appendage. The result is a generous repast of freely improvised victuals that caters effectively to all types of listeners, even those saddled with more pernickety palates."

"The drums plus two tenors format allows plenty of space for solo improvisation. Bianco's role is pivotal, holding proceedings together. For historical reasons, it is often tempting to see such tenor meetings as heavyweight contests, with the need for a 'winner' and a 'loser'. I shall resist the temptation, and declare the listener as the winner on passages where both tenors play together."