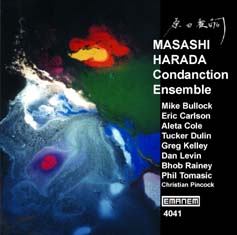 In the school of improvised music sound is thought of as gesture, texture, geometry, flow, etc.; these are visual elements as well. Musicians use their entire body to relate to the instrument and the space where they perform. In my experience as a musician, I learned that music does not only involve activation of temporal spatial field with sonic objects, but also involves emphasis on the visual element of dance and conducting that is strongly connected with the production of music.

While I was growing up I often listened to music while conducting in front of my window. At night when it was dark, I could see my movement in the reflection. I began to collect orchestral scores and practised conducting to the written notes and written music at the same time. During the following years, I became fascinated by music written in the 20th century, specifically Stravinsky and Takemitsu. When I discovered free jazz my body was shaken in quite a different way though it was very natural to my body.

I attended numerous concerts where the music was improvised and I couldn't help but to move my body. I was personalising my joy of hearing the music. Sometimes it was a battle between being self-conscious and being completely taken in. Moving my body to the music helped the practical and conceptual development of my piano and percussion skills. Soon my body and dance became the main musical concept. Body, breath, gesture and texture reconstituted my musical thinking.

One time I was dancing at a concert (sometimes this was not so easy for the rest of the audience to accept) and I felt an almost indescribable intention with one of the performers; it was as if I was activating the sounds the performer was making with his instrument. My body was so tuned to the music that I felt that my perception was as creative as the act of producing sound itself. I discovered that in perceiving, one might actually create a new reality. I later practised my findings by using dance as a silent percussion method and I decided movement could be directly involved with music making. I concluded to connect conducting, dance and improvisation and call it Condanction.

When musicians perform on their specific instrument the fingerings, breathing and gesture required to produce specific sounds is a strict choreographic aspect of performance. Condanction exploits this feedback mechanism between physical movements of the Condanctor and a group of improvising musicians exploring the border between dance and music. In the Masashi Harada Condanction Ensemble, my physical movements initiate sounds created by the musicians while those audio representations circulate back into my physical gestures. This constant interaction creates a visual spectacle; it generates dance and music continuously.

"It's typical of Emanem's Martin Davidson that he should have been quick to spot Harada's potential. ENTER THE CONTINENT is a vivid sequence of condanctions featuring a brilliant young Boston ensemble. The highlights are Bells, a mournful chorale, and Kropotkin vs Huxley, which seems to make play with ideas of utopics, or virtual space as a field of creative endeavour. The sounds are crisp, subtly microtonal (Giacinto presumably refers to the composer Scelsi) and often very beautiful indeed, albeit in the most unconventional way."

"For anyone intrigued by the improvising potential of a little big band, these performances ought to prove both intriguing and inspiring. From the free fractals of Kropotkin vs Huxley to Expulsion of the Triumphant Beast, a dramatic study in textural and timbral contrasts, the Ensemble's focus is magnificent. Voices is a wild and surreal scat chorale that evokes the sounds of a multitude of Phil Mintons. The abrasive fractals that begin Giacinto become dirge lines that evolve into mercurial sonic clusters as the collective performance builds into slowly oscillating waves. Clarity Beneath the Cloud is a vivid minimalist collage that reaches a delicate climax sustained by Phil Tomasic's atmospheric microtonal slide guitar. The minimalist dirge chorale of Bells evolves into another extended collective triumph. Ultimately Harada's project extends the rich legacy of improvised masterpieces issued by the small and yet crucial English label Emanem."

"Masashi Harada is a living example of improvisation. He is a classically trained pianist. He has performed with Cecil Taylor as a dancer and percussionist. He is a visual artist capable of transmitting wonderment through ice paintings. He is also an idealist and creator.

This Emanem release from Harada's Condanction Ensemble is an exercise in unadulterated creativity. 'Condanction' is a Harada-derived word that fuses conduction, dance, and improvisation. The condanctor, using his entire body, directs his assembled orchestra through fluid, spontaneous movements. Dancing. Flapping. Gyrating. Pointing a finger. Stillness. It is to be understood that each body movement signals its own unique gesture from a member or members of the musical ensemble. No baton, no sheet music and no preconceived compositions are present, only the guidance of a body in motion and the imagination of the leader.

Admittedly, the best way to experience Harada's art is in the flesh. This CD stands as the attempt to share the undertakings sans visuals. Granted, the listener is tasked with accessing a considerable amount of the imagination, but be assured that the synapses shall bridge. While the music often mimics the finest of sci-fi film scoring, it comes off surprisingly real in the context of 'condancting'. Listening to Harada's ensemble we can envision the beauty of a body in grace biopathically generating teetering brass waves or spurious, spasmodic, percussive hiccups. But be warned and brace yourself, there are glorious moments that will manage to scare the living hell out of you. These sounds are tangible!

The ensemble was assembled from the finest of Boston instrumentalists. Close the lids and involuntarily pull from the mind's eye myriad parallels to what is heard."

"Masashi Harada directs his improvisers with dance and occasional percussion, calling his method 'condanction'. The players focus on him and the total sound, producing a mutually-supportive feel. It's apt that Emanem - committed to the co-operative ethos pioneered by the Spontaneous Music Ensemble - should issue the results. Kroptkin vs Huxley makes an impressive opener, as the drummerless octet plunges into some excitingly-arranged clusters (cunning, vibrant layerings of timbre) then draws them out into teetering, twirling lines. Though Harada's music is about slow, horizontal development rather than individual expression or dialogic confrontation, the high-pipping extremes of Bhob Rainey (soprano) and Phil Tomasic (guitar) and the low-scudding abrasion of Mike Bullock (bass) are striking. It's exceptionally well recorded: each instrument right in your face, but without spoiling the ensemble vibe. A fine example of collective improvisation, teeming with colour and force."

"The neologism 'condanction', coined by Masashi Harada, could be defined as the act of conducting an ensemble of improvisers through dancing (instead of pointing at the musicians or using a baton). Harada, a pianist, percussionist, dancer and visual artist, explores the border between music and dance. In 1992 he developed his 'condanction' technique with which he tries to establish a feedback link between himself and the musicians, dancing what he wants to hear but also reacting to the sound being produced. Seeing it live is one thing, but one could have feared how it would translate on record. Well, results are convincing, although the listener cannot tell how much of the music is imputable to the 'condanctor'. Masashi Harada gathered talented musicians from the Boston area to form his Condanction Ensemble.

Is it the effect of condanction? This ensemble's sound is remarkably organic: it breathes, it morphs, it imitates life in a way seldom found in free improvisation. The ensemble reacts as an entity, showing great synergy comparable to the best line-ups of Sun Ra and his Arkestra. When Harada uses his musicians' vocal abilities, the ensemble turns into a regiment of Phil Mintons (Voices and the beginning of Bells). Phil Tomasic (guitar) and Greg Kelley (trumpet) stand out as musicians, delivering strong performances. In the difficult field of conducted improvisation, this is one of the ensembles that make the most sense. Strongly recommended."

"Basically, these nine tracks are quite evolutionary in scope as the improvising musicians respond to Harada’s gyrations with sporadic outbursts, plaintive cry’s and interweaving motifs. On Voice, members of the band supplement the musical aspects with garbled chants and unintelligible banter which at times, invokes thoughts of some fourth world tribal ritual yet the musicians render ominous themes and eerie drones along with resonant passages that seemingly arise from nowhere.

With the piece titled, The Whipping Or String Of Lava, we are treated to trumpeter Greg Kelley’s fiery, raspy throated phrasing in concert with steely-edged strings and stormy patterns, while electric guitarist Phil Tomasic emits ghoulish lines amid bizarre choral sequences and farcical theatrics on Tomasic Concerto. Overall, Harada’s concepts and applied theories work rather nicely as the music signifies a great deal more than the tried and true."

"I have to admit that the first time I played this CD I hated it, simply hated it. The music seemed to lack pace, to linger unnecessarily, to waffle. But over a period of time my opinion has changed; or, rather, I now tend to notice other aspects of the music, things I'm more enthusiastic about - the contributions of players such as Bhob Rainey (soprano saxophone) and Phil Tomasic (electric guitar), for example. On this studio recording the group is mainly an octet comprised of strings and brass, and the predominant sounds are breathy and slithery. As the ensemble is percussionless and pianoless, rhythm and tonality are not fixed, and the musicians go in for a great deal of timbral shading and microtonal nuancing to which the listener must pay close attention. Frankly, 74 minutes of music as complex as this is too much to absorb at a single sitting, and sequences of 20-30 minutes work best. Harada's liner notes are useful, and the photos of his ice sculptures on the front and back covers of the CD booklet are gorgeous. There's something interesting about this music, I just haven't figured out quite what it is."

"Harada thrusts himself into the disputed lands between total artistic innovation and wishful thinking. He's brought a clutch of brave Bostonians on board - from the withdrawn and quizzical (guitarist Phil Tomasic) to the brash and visceral (trumpeter Greg Kelley, trombonist Tucker Dulin, soprano saxophonist Bhob Rainey). And listening without your eyes, you're still taken into the ether of slowly generating sounds and textures, an aural equivalent of Harada's ice paintings: the nebulous, billowing, perplexing sounds of a distant planet."