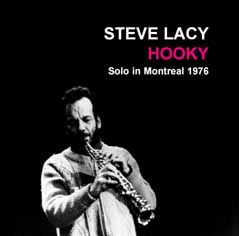 In 1976, I co-ordinated Steve Lacy's first North American tour, which comprised solo concerts in several Canadian cities, preceded by one in New York City on March (not May) 16, subsequently issued as SNIPS (on Jazz Magnet). He also recorded two projects with Roswell Rudd in NYC - TRICKLES (on Black Saint) before the tour, and BLOWN BONE (reissued as Emanem 4131) after. Lacy considered the Montreal concert to be the best of his solo appearances, and asked me to issue most of it on three LP sides with THE WOE (now on Emanem 5022) as the fourth side. I issued one side (with THE WOE) in 1979, but was so disappointed with the print-through that is apparently inherent with LPs, that I did not follow up with the rest.

Returning to the master tape over twenty years later, it was found to be in remarkably good condition, considering that it was not a professional format. The imperfections were either relatively slight or correctable, so it is possible to issue this magnificent concert on CD. The one musically sub-standard moment that night occurred between HOOKY and NO BABY, when Lacy started another piece but abandoned it soon after. By omitting this incomplete item, and editing out the applause, the concert fits on to one CD in the order it was performed.

The first set of the concert consisted of individual original pieces, one of which, HOOKY, has not appeared on any other published recording, (except the earlier NYC solo concert)

The second set comprised the TAO suite plus an encore. Two 1975 performances of this suite were issued on LP. However, Lacy did not approve of either of them. The Tokyo one was relatively uninspired, while the Como one was recorded at the wrong speed and given the wrong titles. The next complete solo performance to be issued was the 1991 one that appeared on REMAINS (Hat ART). It is interesting to compare the similarities and differences between the 1976 Montreal version and the one made 15 years later.

"Solo performance is usually the best way to experience Lacy's music. HOOKY is a well-recorded 79-minute Montreal concert. Lacy's playing is wonderfully imaginative throughout. Although there are more than a dozen solo Lacy CDs in the catalogue, many of them superb, HOOKY may be the jewel in the crown."

"Set down in a capacious church acoustic, this can perhaps be seen as a characteristic solo set of its time. Its focus on some of the composer's most significant texts make this an important entry for Lacy followers."

"HOOKY is a splendid exposition of Lacy's marvelously logical improvising and extraordinary control over the notoriously difficult soprano that benefits from the resonant acoustics of Montreal's Eglise St Jean l'Evangeliste."

"Few artists can sustain rapt attention as Lacy does, or, as happens here, command it. He has always had amazing breath and instrumental control, yet in this period of his life, he exhibited overwhelming strength. He takes the soprano anywhere he chooses, slowly building the improvisations after a methodical statement of the themes. The clarity on this recording is astounding. L'Eglise St Jean l'Evangeliste, where it was performed, provided excellent reverberant acoustics, and this very compatible church environment enhanced the magic Lacy brewed. This is an incredible display of improvised soprano playing and a very welcome addition to everyone's collection."

Lacy is an example of a particularly special imagination. There are few other improvisors that can deliver this consistent level of surprise and delightful ingenuity. Steeped in the jazz tradition, Lacy makes use of compositional structures to kick-start and then shape his imaginings but one still feels that his improvisations could go anywhere and indeed one expects it of him. Although he makes use of a range of extended techniques, like Coxhill who comes closest to him in approach, his improvisation is deeply tonal and deals with the creation of rhythmically varied melody. The variety of Lacy's approaches to the solo makes this recording the closest thing you'll find to a masterclass on the subject."

"Good idea. The church's acoustics give Lacy's soprano saxophone more body than usual (he also plays with the room's possibilities on The New Duck). Apart from Hooky, all the material is well documented elsewhere, but the saxophonist was very inspired on this particular date: the music is lifted by an impressive sense of well-being that becomes almost palpable in Tao and it totally makes up for the small recording imperfections. Fans of Lacy will find him at his best on HOOKY."

"While in general Lacy's style has gradually moved away from noise effects and toward a mature and hard-won beauty, this relatively early solo recording is somewhat anomalous in its sustained lyricism. The New Duck, of course, playfully explores all the astounding sounds that Lacy can get out of a soprano saxophone, but even it has a logic here that's worth following. Meanwhile, the exquisite Crops is an unfolding lyrical exploration that's simply magical in its depth, warmth, and melodic charm.

Steve Lacy has been creating music on an astonishingly high level for almost fifty years now, and he has never gotten his due. HOOKY is just another example of why he should be numbered among America's all-time jazz greats. For this is music that, for all its superficial strangeness, is firmly within the jazz tradition: it is an exploration of improvised variations on set themes, played by a man who is so deeply prepared for the spark, the moment of creation, that virtually every moment is magical.

A masterpiece. Whatever you do, don't miss this one."

"Listeners familiar with Lacy's solo soprano style will recognize certain signature features in this early performance. For the most part, Lacy pursues thematic development without relying on heroic virtuosity or otherworldly extended technique. (One exception: The New Duck, where Lacy coaxes an amazing array of birdlike noises from his instrument.) Instead, he states straightforward themes and proceeds to transpose, transmutate, and reharmonise them. The general tone of these pieces varies from the swinging effluence of Tao: Bone to the spiritual depth of Tao: Existence to the dancing humour of Hooky.

Regardless of its historical significance, HOOKY provides a fascinating glimpse into an active, focused, creative intellect. With no other players to distract him, Lacy pursues his own muse. Compared to the very similar recording SNIPS from the same period, HOOKY has significantly higher sound quality. Nevertheless, it's fascinating to hear how Lacy's conception develops in different situations."

"Listening to selections like The Crust and Pearl Street will reveal Lacy's ability to craft workable and surprising hooks - those areas in composition that capture the audience with their wit and compulsive nature. The playing is incredibly sober; only a musician with astounding technical skill could swirl his way around a theme the way Lacy does, and still construct an appropriate transition back into the melody. On - A - Dime. His sense of humour shines in The New Duck, where the soprano reaches the thickest depths of its register to animate the title of the tune, an inside tribute to Ben Webster. Tao, his suite composed for six elements of Lao Tzu's greater principle, is performed here uninterrupted and is championed by its author over two earlier recorded versions. The suite weaves in and out of its own related components and is best enjoyed in its entirety. An end is brought to the final set by Revolutionary Suicide, a moody encore that attempts to make a conclusive statement as well as sign off from a ballsy endeavour.

The fact that Steve Lacy continues to submit compelling music to his listeners is testimony that he had it right long ago. Here Emanem has released HOOKY in full 70+ minute length - minus one false start - for the first time since it was originally recorded. The music itself far outweighs the minor technical shortcomings seldom heard in the recording. Such is the nature of dusting off the master tapes."

Note: Immediately before the release of HOOKY - whilst it was being pressed in fact - I discovered that SNIPS had been released on Jazz Magnet. This was recorded eight days earlier in New York City on March 16 (not May 16 as misprinted on its back). Strangely, I was at the NYC gig, but not at the Montreal one. The following review covers both HOOKY and SNIPS.
M.D.

"Lacy is the absolute master of the soprano and supremely fluent in the solo format. His playing on these discs is sometimes tender, sometimes abrasive but always precise and economical. The heads to these musical sketches are comprised of repeated harmonic cells, comprised of mostly short, cleanly articulated notes, that frame structured improvisations created from recycled thematic material. Lacy works through these pieces as carefully as a mathematician solving an algebra problem, though such a description fails to communicate the sly humour inherent in each of these gems. Shards of swing, Dixieland, Monk, tango calypso and even bird calls are refracted, reflected and reassembled in previously unimaginable ways.

There's a lot of overlapping material, so which one to choose? The nod must go to the Emanem release, which boasts a far cleaner sound."