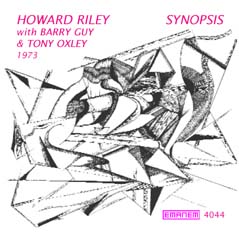 The Howard Riley Trio of that period was a working band, one of several in that time period that were evolving a distinctly European sound. During its existence in the 1970s, this trio used both open form (i.e., totally improvised) and set-form approaches. This recording concentrates on the latter. The use of graphic frameworks mixed with conventional musical notation, which still allowed freedom for the improvising musician, was something we were all familiar with - Barry with the London Jazz Composers Orchestra, Tony with his Quintets and Sextets - and I devised the enclosed five pieces specifically for the Trio recording. Each piece was completed in one take and no overdubbing was used.

That was the conceptual basis of the music. More importantly, the feeling and interaction within the group is what stays with me, and this recording captures those all-important things with great clarity.

"SYNOPSIS is probably the trio's finest moment. Reissued here in its glorious entirety, with the addition of 18 minutes of Runes', it's a wondrous thing. Had it been presented to me as a release recorded this year I would have been impressed; that it still sounds this fresh almost 30 years on is daunting testament to the group's brilliance. What's remarkable about the trio is their incredible flow of interplay: they effortlessly switch between elegantly poised rhythmic rapports and maze-like slow-swelling sound arrangement, effecting changes in direction and shifts in instrumental balance that very few groups could pull off. Guy and Oxley are imperious, the former injecting with trademark energy heady doses of pizzicato and arco, the latter scouring his kit - embellished with his by now customary 'live electronics' - for a phenomenal range of sounds.

Riley's early '70s playing was at the time compared to Cecil Taylor, and there are surface similarities in his use of clusters of notes. He is, however, a much less percussive and physical player, and his not very Taylor-esque forays into his instrument's innards always reap rewards. The three patiently and delicately circle each other, always ready to burst into torrentially fluid and quicksilver dynamics, which then seamlessly develop into extended passages of sound attentuation, which are closer in nature to electronic composition than any recognisable notion of Incus improv. In carving themselves new territory so skilfully, they illustrate how far intelligent musicians with open minds could and can take the piano/bass/drums format. An indubitable classic."

"SYNOPSIS was one of the best albums of 1974, and this reissue sounds vital and bang-up-to-date. At times, Riley shows a surprising indebtedness to Cecil Taylor, but he's a less physical and more lyrical player. Sometimes he works directly on the strings, and bassist Barry Guy and drummer Tony Oxley amplify their instruments. This is discernibly a piano trio, but one patrolling the outer limits of structure and form."

"SYNOPSIS is riveting from start to finish. Guy's sound-world is gloriously different from that of any other bass player of the time. At the same time, Oxley seems to have broken the bounds of jazz percussion in the most joyous and intelligent way. It's impossible to luxuriate in these performances without concerning oneself too much about the structures involved, which are looser and less concentrated than on earlier recordings."

"Pianist Howard Riley led one of the most exciting trios in the early '70s. With Barry Guy on bass and Tony Oxley on drums, Riley produced some of his best work on this utterly absorbing session. Riley forged an original style that shows traces of Cecil Taylor, but he emphasises small clusters of notes, and sometimes works inside the piano. Guy's scratchy strings are fully evident, as he focuses on sound rather than the traditional timekeeping role of the string bass. Oxley and Guy use pedal-controlled amplification, but it is the totality of the performance - the blending of three distinct, creative voices - that rises to the top. Oxley is at his best, using tools in remarkable ways that squeeze every nuance from his collection. While there are no specific melodies, there are what the pianist refers to as 'set-forms' (i.e., 'graphic frameworks mixed with conventional musical notation'). The results are no less radical and just as fascinating as totally free improvisation, as the trio performs at the fringes of the musical spectrum. A colossal recording that belongs in every jazz collection as an example of the best of British improvised music."

"The first thing that strikes you is the clear and vivid sonics and soundstage, and I had to look at the box to be sure this was a recent recording, as Emanem producer Martin Davidson has been issuing brand-new performances as well as digging into the treasure-trove of British improvisation from the 60s and 70s. I was paying more attention to the music notes than the liner notes, so I was a bit taken by the 1973 date, then realizing that the analogue recording would indeed have more vibrancy.

The music: It starts with arco bass and electronic rumblings, then pizzicato. What follows is sixty-six minutes of prime improvisation, for although there were directions, the interplay is clearly intuitive. To do a play-by-play with music like this defeats the purpose, so I’ll confine myself to some general comments. The producer notes that both Oxley and Guy use “pedal-controlled amplification. These electronics as used with such an intelligent touch that they are an integral part of the musical textures they create. Fear not fuzak or whooshy overlay drones.

There are moments when Quantum feels as much like composed electronic music of the same era as it does improvisation, due to curves of sound and block-like changes in volume. Riley plays inside his piano, and the wood sound of all three musicians plucking, scraping, bowing, and bending create a unity of sound, though each sound is so different in timbre. Guy skitters on his string, a slippery slope down, then grinds arco, while the electric bass gives a ringing matched by a gong-like sound. All play more intensely, densely, in this piece. Ingot also is rich with ideas, and ends slowly, with a piano notes fading like church bell peals as the bass resonates downward. The eighteen-minute closing cut, released for the first time, is busier at first, although there are many quiet sections, some breathtakingly so, such as six minutes in where it sounds as if an Aeolian harp is playing.

Riley I previously knew by name only, and he’s certainly the equal of his better-known (at least in the States) partners. If you generally crave Emanem, or AMM, Riley’s disc is requisite. Because of the use of the electronic, I’d even suggest laying this on your prog-rock friends to wean them from beat-structure, and your noise-ambient pals to teach them about true interplay rather than just 'remix', and let them enjoy the sound of this kind of music-making. Soon they’ll crave for more."

"Pianist Riley describes his 1973 recording as being based on a setform approach, meaning it used notation and a system of structure as a conceptual foundation. Interestingly, the music sounds as open and free as any of the European endeavours of that or any era. The highly energetic and demonstrative bass playing of Guy is commanding, complete with his rapid-fire striking of the strings with his bow. The distinctive way in which Oxley defines the rhythmic, or in this case arythmic, process is arresting, as is his agile use of an odd assortment of percussion implements. Add to this the interruptive, probing piano style of Riley, and you have a trio expounding liberally on the creative possibilities buried in the pieces. The music takes on an introspective presence as each musician ekes out microscopic filaments that intertwine with the others in forming the irregularly shaped movements. At times, Oxley experiments with live electronics to add eeriness to the already spatial sounds. On each tune, the momentum builds to allow all three to sing out in spontaneous celebration. Runes is an 18-minute bonus that did not appear on the original recording. Riley is at once assertive and sensitive, aggressive and gentle while directing the action. This is highly challenging music that has not lost any of its luster in the intervening years."

"The Howard Riley Trio of the early 1970's was an assembling that betrayed all of the common countenances of a piano trio. Their music was free and incredibly risky, if one chooses to establish limits on the art form. Emanem Records has performed a great service in resissuing SYNOPSIS. Listeners may again bear witness to the highly skilled musicianship of Howard Riley (piano), Barry Guy (basses), and Tony Oxley (percussion and electronics) as they approach the outer limits of creativity with conviction. Significant mention should be given to Oxley, whose playing here would eventually capture the attention of such innovators as Alexander von Schlippenbach and Cecil Taylor.

The music itself was partially composed, partially improvised. Riley wrote his compositions using graphic notation, a preference employed by leaders wishing for abstract explorations into their music while retaining the luxury of a loosely written plan or format. Mandrel opens with a tempo-less bridge-bowed declaration from Barry Guy. Enter Oxley and Riley. As the music begins to materialize upward, so does the energy. There is the threat of mayhem, then subsidence. The members of the trio embark on their own quiet, respective assimilations for an extended period and return to common ground with pliancy: a synopsis. Oxley attenuates his electronics (accented heavily by some amazing pitch shifting) over Guy to create a particularly gloomy atmosphere on Quantum. Listeners will find textures that reveal and unveil themselves in fragmentary order. The musicians focus on the subtle nuances of their interplay, though heavy attention is paid by each into their own individual doings. Runes is a wild, colourful end-all that features extensive statements from all members of the trio. At midpoint, following a lengthy stint of communication between piano and bass, Oxley makes a smooth transition to his toms that sets the feel for one final, collaborative coda."