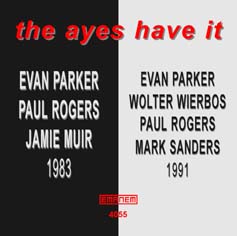 THE AYES HAVE IT

Some recordings that should be issued are not long enough in themselves to fill a CD. This disc is made up of two such sessions, which are very different from each other, even though they both feature Evan Parker and Paul Rogers, and are both excellent. They both also feature groups that performed on one occasion only.

Since around 1980, Parker's primary group has been the trio with Barry Guy and Paul Lytton. However, he has often worked with other musicians in this period, either because Guy and/or Lytton have not been available, or just because he has wanted to explore other possibilities.

The exact circumstances that resulted in the first (1983) session have been forgotten, but the music deserves to be remembered. This increases significantly the meagre number of recordings to feature the exceptional percussionist Jamie Muir. From 1968 to 1972, Parker and Muir were members of the ground breaking Music Improvisation Company. Then Muir left the scene to join a rock group, and went on to become a Buddist monk. He returned briefly around a decade later, making a few appearances on and off record. His percussion set up, featuring hand bells, a large sheet of metal and some toys, was somewhat different than that of the previous decade. Shortly after this session, Muir withdrew from the musical world again, and has subsequently concentrated on writing poetry.

For much of the latter 1980s and early 1990s, Parker often used Paul Rogers and Mark Sanders for local gigs. Both of these musicians have been ubiquitous on the London scene for years - performing with just about everyone, either separately or together. However, Rogers has not been seen so much in London since relocating a few years ago to France, where he has made a superlative solo CD HERON MOON (Rare Music 025), among other things. Sanders continues to be the first choice percussionist for many London musicians, and is building a well deserved international reputation.

The second half of this CD comes from a pub gig by this trio. That afternoon, Parker had been playing on a Steve Beresford recording session that also involved Wolter Wierbos, one of the leading lights of Amsterdam. As this was a very rare visit to London for Wierbos, Parker invited him to sit in that evening, resulting in the music heard here.

"The first set (Ayes) documents a set of 1983 London studio recordings with the trio of Parker, bassist Paul Rogers, and exotic percussionist Jamie Muir. Parker seems quite restrained here. He insistently occupies the higher register of the saxophone, coaxing delicate overtones and flitting through repeated small-interval riffing. The tonal balance of the Ayes portion of this recording seems strongly biased by percussionist Jamie Muir's preference for the delicate sonorities of bells, metal, and hand toys. Muir's sparse use of these instruments for colour (and almost never for timekeeping) works best when the other two players stick to the low end of the dynamic range and the high end of the tonal range.

Things change on the subsequent 1991 quartet recording The Eyes Have It, a 36-minute extended quartet improvisation. With trombonist Walter Wierbos lending a second lead voice for the first half of the recording, Parker aims for a higher level of intensity. Roughly seven minutes into the piece, Parker spurts manic high-end rockets while Wierbos eggs him on with rapid-fire note clusters and evolving four- or five-note vertical motifs. The interplay that develops reflects a beautifully abstract call-and-response interaction. Meanwhile, bassist Rogers, who was so restrained on the first half of this disc, unleashes a relative fury of energy. Rogers develops and expands motifs that punctuate the horns and tend to spur them onward whenever the group momentum momentarily dips. Likewise, percussionist Mark Sanders performs blistering snare-cymbal combinations that lurch and wriggle their way around the other players' ideas.

It's ironic that two Evan Parker performances could be so dramatically different in approach, tone, and intensity. These differences reflect the personal context of these recordings, and they provide an amazing demonstration of Parker's ability to shoehorn his creativity into whatever niche is available. Yet ironically, despite the influence and contributions of the other players on these tracks, it's Parker's remarkable musical vision that ends up stealing the show. THE EYES HAVE IT is essential listening for any Evan Parker fan, and a fine starting point for afficionado of free improvisation."

"THE AYES HAVE IT contains two sessions held eight years apart and both featuring saxophonist Evan Parker and bassist Paul Rogers. First is a 30-minute studio set by a trio that includes Jamie Muir, a percussionist who briefly played with King Crimson, retired to become a Buddhist monk, and made a short comeback in 1983 as the free improv musician he always was. Very few albums document his last burst of activity. His performance here is impressive and refreshing. He did not use a drum kit, limiting himself to hand bells, toys, small percussion and a large sheet of metal. This set-up requires from Parker and Rogers to adjust their playing. Aye 3 illustrates the results perfectly: Muir literally forces a halt two-thirds in, interrupting the saxophonist¹s circular breathing with his delectable idiosyncrasies - a must. Part two of the CD is a continuous 36-minute live performance recorded in 1991. The quartet includes drummer Mark Sanders and legendary Amsterdam trombonist Wolter Wierbos. He sits in for the first 20 minutes, answering Parker's strings of notes with volubility. After his exit the trio continues, raising the ante before letting things cool off to allow comfortable solo spots for the bassist and the drummer. Although both sets are unrelated, they provide solid moments of creations. The historical value of Muir's performance alone gives THE AYES HAVE IT a special importance."

"Muir's 'kit' seems to consist mainly of bells, chimes and cymbals, and his approach to them is gestural and dynamic. Although he clearly has at least some drum rudiments, his whole attitude to the instrument is very distant from that of improvisers who trained heavily in jazz. He seems to put sounds just where he wants them; an extraordinary player who recorded very sparsely and has long ago absented himself entirely from the scene. There's a bit over half an hour of music here, and it's valuable primarily for Muir's presence, but Parker turns in a classy performance which can't be denied. Paul Rogers will perhaps always be thought of as the saxophonist's second-choice bassman, which would be unfair, because he plays beautifully here, working closely with both players to create a layered ensemble sound in which everything is tied together without losing its sharpness of focus.

The remainder of the CD -- half an hour, because like most Emanem releases this is pretty packed -- is taken up by a quartet gig from 1991. Parker and Rogers are joined by Mark Sanders, a percussionist on whom so much praise has been heaped in these pages that it would be redundant to add more, and trombonist Wolter Wierbos. Wierbos is a Dutch player who Parker nabbed during a brief visit to London. He plays with a firmness reminiscent of George Lewis, and works wonderfully with Parker, so that the two are able, with what appears to be complete relaxation, to spin a pair of contrapuntal lines for many minutes at a time.

This is a much more jazzy set than the one with Jamie Muir, with a cymbal-tickling pulse from Sanders, solos and a generally swinging feel. It's relatively laid-back, though, and although it hots up occasionally it's nice to hear such a chatty dialogue between the two. The interaction between Parker and Wierbos is a joy to listen to, and immediately one wants to hear more of it."

"The first group is a trio. Parker is in fine form, and the trio gets a distinctive character from Paul Rogers' forceful rolling bass -lines and eerie arcos and Jamie Muir's quirky, percussion play that includes toys, springs, and a lot of other unusual metal. The second band is a quartet, Parker's trio with Rogers and Mark Sanders augmented by a special guest Wolter Wierbos. While Wierbos exits the 36-minute piece around the 20-minute mark, his brusquely blustery trombone and its rapid-fire whirlwind lines are a real addition to the group contributing to some wildly forceful, almost combative, interplay."

"Muir is a really rattling player who generally tends to work small areas of percussion rather than spread it on thick. With great concentration, he shapes many of the music's best moments. At times, he displays the uncanny ability to match Parker's serpentine articulations; at other times he stops on a dime, forcing Rogers and Parker to readjust and reassess their improvisatory habits.

Rogers plays beautifully both here and on the 1991 set, layering his sound into the overall fabric of the improvisation seamlessly. Wierbos and Parker play so sympathetically that I'm surprised there aren't other recordings in the canon or forthcoming. Here's hoping that will change since it's a vivid, exciting partnership.

Of course, Parker plays wonderfully throughout, that's a given. The first set is a bit more exploratory, the second a bit more 'Jazz'-like. Rich, satisfying stuff and welcome addtions to the massive discography."