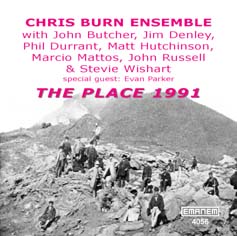 THE PLACE 1991 is a recording of our performance during the Crosswinds Festival, which was held at The Place theatre, London during October 1991. The festival was directed by Mark Ingleby, and had active support from Sonic Arts and the SPNM. The stated aim of the Festival was to 'highlight the musical and creative links between jazz improvisation and the work of contemporary composers.' Ensemble shared the October 13th concert with Evan Parker who played a solo set, and joined us for the final piece of the evening: Blocks and Arches.

At Crosswinds we collaborated with Evan on a structure of my making called Blocks and Arches. As with The Piano Ate Card and Presponse, I was primarily concerned with groupings of musicians. On Blocks Evan was asked to play throughout the piece, likewise Stevie Wishart (on hurdy-gurdy) for the majority of Piano. The score presents to soloist and ensemble member an ever changing and sometimes rapidly changing landscape. How they work within this is entirely up to the individual.

The only freely improvised piece is Hammer Hint. Listening to this piece many years later, I was struck by how entirely possible it would be to score it out in the manner of an Ensemble structure. For me this is no bad thing. The structured and freely improvised have, I feel, been mutually influential. In fact, as mentioned above, it is the case that a whole series of reciprocal relationships informs the music of this concert.

On a personal note, listening back to these compositions and also my playing of 10 years ago, I can hear things that I have since discarded; things that have ever been present, and also material and techniques that were then in their infancy. I hear similar processes at work with the group, individually and collectively.

Early on, Ensemble decided to work without a drummer. Occasionally the idea of an orchestral percussionist cropped up, but no-one sprang to mind. I like a lot of those sounds, and asked Matt Hutchinson to select - amongst many of the available horrors - 5 usable percussion samples. Each had an exotic name, and Southern Samba a Go-Go is a framework for him to improvise in duo with piano, tenor, guitar, flute and then the remaining string trio; starting each time from one of these settings.

"This is only the third recording by pianist Chris Burn's Ensemble, and it borders on the astonishing. Recorded in concert ten years ago, this release captures a stellar performance of a series of compositional forms by the leader and John Butcher, a graphic score by Keith Rowe, and a collective improvisation. Burn has developed an incisive melding of improvisational strategies with compositional form, resulting in am approach toward collective improvisation that bristles with intensity and invention. A good deal of the success here goes to the group of like-minded partners the pianist has assembled.

Throughout, the specific timbral blend of the instruments provides a constantly shifting ground as individual voices peak through and then get enveloped back in to the group interactions. It is readily apparent that the scores here provide overarching structural cues, while still leaving each player the freedom to subtly shape the ensuing flow. The pieces are built from intertwined threads as subgroups within the ensemble form and then realign themselves, building dynamic tension and release. It is intriguing that when the freely improvised Hammer Hint comes along, the collective approach naturally develops a compositional sense of form and blocking. Only two of the pieces have a sense of a single focal voice. On Burn's The Piano Ate Card, Wishart's hurdy-gurdy provides a unifying focus as various groupings gravitate around the buzzing drones. The closing Blocks and Arches uses a similar approach, but this time it is guest Evan Parker's self-effacing tenor eddies that provide the propulsive force without ever taking centre stage. From the few documents available, it is clear that Burn is a major voice in contemporary improvisation."

"The Chris Burn Ensemble records sparsely (to say the least!). That is why the release ten years later of this concert recording from 1991 doesn't feel awkward at all. Sound quality is excellent, the performance stellar. Some of the musicians involved have considerably modified their approach in the course of the decade. Yet THE PLACE 1991 sounds fresher and livelier than previous documents of this group. The group performs one collective improvisation Hammer Hint and loose compositions by Burn and Butcher. Most of the time, the directions only specify successions of groups of musicians, textures or contrasts. For the first time the group performed a piece by an outsider, Keith Rowe's Pollock #82 which turned out to be a highlight. Another is found in The Piano Ate Card featuring Wishart's hurdy-gurdy. The alien sound of this instrument, paired with sharp improvisational ideas from the other musicians result in one of the most captivating moments on this CD. Of course the music remains abstract and difficult, but THE PLACE 1991 is also surprisingly organic. Something happened that night."

"The opener Presponse, elicits notions of an avant-garde or offbeat Sci-Fi thriller due to a series of fragmented themes and brazenly stated undercurrents by saxophonist John Butcher, flutist Jim Denley and the strings section. Furthermore, Burn renders some relatively eerie statements via his utilisation of a toy piano. In Keith Rowe's Pollock #82, the musicians pursue mischievous involvement, propelled by nimbly plucked strings, Butcher's raspy-throated sax lines, and a volley of whimsically inclined call and response type exchanges. Saxophonist Evan Parker appears on the final cut, Blocks And Arches, which is a work featuring circular motifs, flickering notes or as my attentive grandson stated, 'the movement of cartoon-like characters' or 'the sound of something spinning'. Thus, music of this ilk disproves any notions of barriers, or perhaps anything that might intimate a finite conclusion. Recommended!"

"The group specialises in compositions for improvisers, mainly of the graphic/conducted/descriptive sorts. This kind of thing looks silly on paper, but it really works here, mainly because everyone involved is highly experienced in this kind of environment. The surprise is that this gig was taped in 1991, just a year after their first commercial recording. You might expect this, then, to capture the CBE at an early stage in its development, but they had already been working together for five years and in fact this music, like that on the CULTURAL BAGGAGE album, is extremely assured."

"A fascinating insight into the evolution of the Chris Burn Ensemble. The set, recorded at the Place theatre, consists of three Burn compositions (including the brilliant The Piano Ate Card which features Stevie Wishart's hurdy-gurdy), one by Butcher (misleadingly titled Southern Samba A Go-Go), one by Keith Rowe (unusual, since he isn't a member of the ensemble) and one free improvisation. "