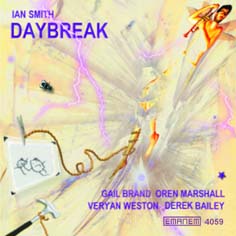 I am delighted to be asked to participate with and indulge my personal thoughts for this amazing CD.

To mind comes the term 'organology' as the music presents a magnificent essay of vibrating air columns, of metal, of lip contact and tactile interaction. Pistons, keys and frets, the guitar and organ: a great starting place for dreaming - the timbre of sustained guitar, the lungs of the organ, continued sounds.

The sense of 'fingers' is strong as is the 'physical enjoyment'. Of course music can work on many different levels simultaneously and the receiver finds his/her place amongst these layers - interpreting, attaching significance, noticing patterns, behaviour, letting him/herself loose on the experience - listening each time anew.

Humour comes through with each player's personality and relationship to their instrument. The whole unfolds in a great sequence and the dream becomes reality.

The Regal is the small organ that sits atop the chest organ, but it is positively the least regal-sounding instrument on the session. Its tone often closely resembles the organ played by Sooty the glove puppet TV bear, especially when Veryan gets those half-stop effects going. I'm also reminded of the great David Tudor's version of Christian Wolff's 'For 1, 2 or 3 People', which he plays on a baroque organ.

"A small miracle. What a wealth of sound from such unexpected instrumentation. Wherever his sound comes from, namesake Leo Smith, Bill Dixon or the Gabriels of forgotten jazz bands and orchestras, Smith is in love with brass. That comes across on the delicious trio with Marshall and Brand, Falange, Falanginha, Falangeta, as well as the opening duet with the brilliant tubist. Weston plays a breathy chamber instrument. The veteran Bailey is the trumpeter's partner on Coffee and makes light of the fact that timbrally he is odd man out on this date. It's a stunning album, one of the unexpected treasures of the Emanem catalogue and something that anyone interested in contemporary trumpet-playing and structured improvisation should sample."

"More so than their American counterparts, English improvisers appear unfettered by the constraints of conventional ensemble etiquette. Holding true to tenets championed by Derek Bailey, one of the elders of the scene, any and all instrument aggregations seem welcome in their regular interactions. Hand in hand with this open door policy comes a healthy zeal for experimenting with non-traditional combinations. The usual character roles for instruments simply aren't adhered to in the realm of free improvisation and this predilection is definitely the guiding principle on Ian Smith's latest offering. Trumpet teams with tuba (Daybreak), guitar with chamber organ (Sometimes), and duos, trios and quartets ensue. Virtually every possible combination of players is explored. In fact, only three of the fourteen tracks feature the complete quintet. In every instance extemporaneous interplay charts the course and the resulting music is decidedly free from the sometimes-stifling impediments of individual ego.

Smith and Oren Marshall start the proceedings, doling out a sputtering ode on their instruments that approximates the footfalls of lumbering giants. Gail Brand joins the band on the following piece, spitting out coruscated breath sounds and jockeying her slide with limber grip while Veryan Weston announces his presence on Carpe Dentum with a sustained sonar buzz that instantly evokes the visage of Sun Ra circa ATLANTIS. Derek Bailey arrives as the final cog in the organic machine with There We Are, where his pedal-calibrated volume swells match timbres with Weston, who sounds much like a calliope gone mad. With full quintet finally assembled the players buck convention and once again revert to component groupings. Bailey's spindled strings spin warbled cobwebs around Smith's stuttering phrases on the caffeine-addled Coffee, again creating an environment steeped in the unforeseen.

Weston takes full advantage of the tonal settings on his instrument during the solo Function of the Organ, spooling out a series of snippets, spliced audio verité fashion, that sound like they were lifted from a Messiaen suite. The piece acts as a fitting mid-point interlude prefacing the quintet's full-scale return on the cautionary Don't Even Think About It. The balance of the program tracks parallel trails of spontaneous invention, leaving musical marks on listener psyches that soon fade in terms of specific identifying properties. In this respect the sounds of Smith and his fellows follow a course conventional to free improvisation in that the odds of these interactions ever being exactly recreated are nigh impossible."

"Smith's style has the free-form panache of a Wadada Leo Smith or Joe McPhee, but his experience of other musics is never too far from the surface. Some of his gestures seem to derive from earlier forms of jazz, and there are moments of harmonic directness that you could put chord symbols under. But it has all been thoughtfully moulded into a highly convincing and distinctive language.

The most immediately striking thing about DAYBREAK is its highly unusual instrumental line-up. The front line of trumpet, trombone and tuba often hints at an errant marching band smashed to smithereens by too many individual thinkers. Having Veryan Weston play on a wheezing chamber organ rather than his customary piano was a masterstroke and adds a unique flavour to the music. The organ sometimes acts as a harmonic drone that glues things together, but elsewhere Weston rolls his sleeves up and adds capricious decoration to the brass lines. The clipped brittle sound of Derek Bailey's guitar gives light to the languid shading of Weston's organ and adds to the impression of a project that has been very carefully thought through. Indeed there's 70 minutes worth of music here, but nothing feels superfluous. Veryan Weston has a track to himself to show off the various possibilities of his instrument and he's also heard to terrific effect against the strained harmonic overtones of Marshall's tuba. The music culminates in a colourful, splashy finale. DAYBREAK is an original and beautiful experience, and something to play someone who thinks they don't like free improvisation."

"DAYBREAK is a much more satisfactory CD than Smith's 1997 TRYST. Here we find him better surrounded and more confident. The unlikely instrumentation works surprisingly well. The opening duet between the tuba and flügelhorn sets the tone: highly creative, slightly contemplative with a touch of humour. The brass trio Falange, Falanginha, Falangeta is simply something we hear very rarely in freely improvised music. Bailey is heard in half of the fourteen tracks and his contribution always blend in perfectly. His duet with Smith, Coffee, constitutes one of the disc's highlights. Weston gets the best out of the instrument in Windsurfing, his atonal chords establishing a gloomy atmosphere. Another quintet piece, Don¹t Even Think About It, is also worth noting. Smith's preference for short focused improvisations works very well here. It gives the pieces more density and fits his own esthetic which now reside closer to the breath-born lowercase sound of Axel Dörner or Franz Hautzinger. This is his best release so far."

"Trumpeter Smith has produced a work that's as significant as it is fresh, using some unusual instrumental combinations in a series of collective improvisations. The sound palette and the unusual combinations of overtone patterns - rooted at times in traditional baroque brass and organ sonorities - lead into some genuinely new directions. The brass/organ sonorities of the sustained chords of There we are are extraordinary, while there's tremendous range of approaches on Windsurfing. It's deeply mysterious and beautiful; most peculiar is that the band sometimes seems to swing in an almost tradition way, thanks in no small part to Bailey's mastery of traditional and subliminal jazz kinetics."

"Smith himself is an eloquent trumpeter but not a flashy one. His lines curl quite gracefully, but there's an injured sound in them. Brand is forthright and firm in her playing: each note is pushed out with definition. Marshall, by contrast, makes huge sounds which transform under pressure. He's reinvented the tuba and well deserves the plaudits he is already garnering. With such a characterful brass section, the quintets inevitably become multicoloured, rather festive affairs, but it's extremely beneficial to be able to hear smaller groupings which better expose the individuals. Bailey is as at home with them as with anyone, a familiar voice amid all these (relatively) less-familiar ones.

Weston is, of course, well-known for his pianism, but here he gets his hands on something called a 'chamber organ', an 'early music' instrument of some description. It sounds wonderfully reedy but warm, and an extended solo section reveals it capable of some synthesiser-like sounds as well as some of the thinner church-organ timbres. His duet with Derek Bailey is the only other track on which Smith himself is absent, perhaps emphasising the importance of capturing Weston on this unusual instrument. Bailey seems to be tapping his foot here -- a regular pulse disappears and re-emerges. The music here is varied but uniformly good, the mix of youth and experience a successful one."

"Smith opens with a spitting broken-line attack, while tuba player Marshall groans and moans in dirge-like rebuttal. They are joined by Brand, who works in robust trombone contours while Smith and Marshall continue their high/low volatile exchange. Enter Weston, who plays a chamber organ that casts a séance-like mood over the proceedings. Finally, Bailey comes aboard with delicate, scratchy filaments of guitar light shining on all. From there, the players drop in and out to make the session a liberated version of music chairs

The brass trio interacts ambitiously with Weston's organ, which produces stately church-like rolls or squeaky trills. Smith, Brand and Marshall cover the range of the sound spectrum and worm in all forms of interrupted statements from mellow to abrupt around the heavy organ strains. Bailey's contributions are quite the opposite, being very thin lines of wire that bind around the weightier music to enhance the contrast. The huffs and puffs from Marshall's tuba are in stark contrast to the shrill guitar spirals rising from Bailey's strings. Despite all this sonic variation, the music unfolds as a cohesive wave of stimulating sound that continues to wash ashore unabated. Although the individual improvisations are absorbing, the sound assimilated in its totality is the most penetrating on the senses. This is heady music in the British tradition, but the sensation only works in conjunction with an open mind."