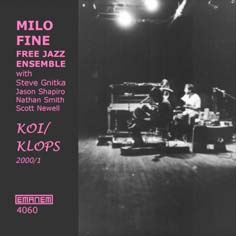 The Milo Fine Free Jazz Ensemble was founded in 1969. Self-determination has been the cornerstone of the group's public appearances since 1970.

Steve Gnitka joined the Ensemble in 1975, after an introduction arranged by Scott Newell. From then until now, Steve and I have been the core of the Ensemble.

I met Jason Shapiro in 1990 when he was a student at the Minnesota State Arts High School, and I had just begun my brief, sporadic tenure teaching an elective course in free improvisation. Subsequently, and greatly due to Jason's impetus, numerous sessions of playing and discussion with the students took place outside of the school. Over time, the group's interest in improvised music waned, while Jason's grew as he shifted his instrumental focus from drums, which he had played since his pre-teen years, to the synthesizer and piano (the latter being his childhood instrument). His popular music focus shifted as well, from alternative rock to ambient pop (the band Ousia). But as his commitment to free improvisation remained firm - and is, currently, his primary musical focus - he and I made our first public appearance together in 1996. He's since become a regular associate of the Ensemble, and, in addition, donated, designed and maintains my web-site.

Scott Newell's initial instrument was the guitar, and his first group, Reykjavik Gold (founded in the early seventies), specialised in raucous free improvisation. (For a time during this period, he was also a member of the Ensemble.) The late seventies / early eighties found him playing tenor sax exclusively as the leader of, and primary composer for the freebop-based Keith Miller Trio (aka Newell / Miller / [Tom] Prideaux). His current group, the Fess Parker Project, which includes Steve Gnitka, spotlights his unique homemade notational system and texts. Thus, these days, when interfacing with the Ensemble, Scott, at his discretion, weaves aspects of this material into the group's spontaneously generated fabric.

Born 1952, Milo has played drums since 1961; piano since 1966; and clarinet since 1974. His initial contact with the marimba was in 1959, and he returned to it in 1990. In 1980, Milo invented the m-drums, a percussion kit made up of "found objects", broken cymbals, etc., attached to a practice pad set. In 1987, this kit evolved into the m-drums II, which incorporates low tech electronics. He played bass clarinet from 1989-1997, and since 1992, has played alto clarinet. (Instruments such as the cello, trombone, accordion and, as of late, the violin and celeste, have also been part of Milo's arsenal). He also utilises low tech electronics in conjunction with the clarinet and marimba.

"Fine is a serious instrumentalist, and he's no anti-technique guy. Quite the reverse of using his collection of instruments as random sound-makers, he appears to have added them very gradually, working up a distinctive technique on each. As a percussionist, he's busy and rattly, taking the rhythmic undulations of free jazz and welding them to the timbral world of Europeans like John Stevens. His attack is brittle, sharp and usually multiple.

Steve Gnitka is something is a mystery. One track 1 he plays almost nothing but open harmonics, making the track essentially a Fine solo with gentle accompaniment from the guitarist. The second of the two duets finds him more forthcoming, but not much more. He's a withdrawn player who's more than happy to let his partner's big personality take centre stage. Nothing wrong with this, of course, especially when Fine is clearly quite capable of carrying the show, and Gnitka turns out to be good at subtly complementing him. When he does come forth, however, the guitarist is capable of some impressive soloistic statements, jazzy and sinuous in contrast to Fine's hard staccato.

Saxophonist Scott Newell brings a change of perspective to things. His composition .181 is a mid-tempo, boppish tune and his playing raucous and bluesy, so for the first time the term 'free jazz' seems properly applicable. He even sings a bit toward the end, although maybe 'sings' is too strong a word for his preaching recitation of a small collection of apparently random phrases. It does, however, spark off some of his strongest playing, and although he's not an amazing instrumentalist what he plays has coherence and a pleasing narrative about it.

Gnitka is, it would appear, on more familiar territory here, too; although he has not real jazz under his fingers, this works to his advantage and his weird, minimal comping is undoubtedly cool. He's reminiscent of a more relaxed, less up-front Sonny Sharrock which is, naturally, no bad thing at all. About halfway through he takes a solo which is impressively realised, and dispels any doubts which is tentative approach on some of the foregoing music might have raised.

The overall impression one gets here is of relaxed but quite intense sessions. Fine plays furiously but, perhaps because he entirely eschews the ride cymbal, he never comes on like a blasting jazz drummer and the overall tone is simultaneously busy and sparse; a pretty continuous blizzard of notes or percussion co-exists with an almost pointillist aesthetic. This is a CD which will repay many listenings: fascinating, involving and perhaps even brilliant."

"Fine's group has been compared to John Stevens' Spontaneous Music Ensemble and this recording brings more evidence of the similarity. But the music on KOI/KLOPS is generally less self-absorbed, more lively, akin to a session by the trio of Evan Parker, Barry Guy and Paul Lytton for example (the latter's kit also includes junk metal). That is to say the music is not all ultra-abstract, sparse and quiet, neither is it an all high-energy contest. The quartet pieces are especially nice and include many changes in instrumentation. Shapiro's use of a synthesizer is refreshing and absolutely relevant."

"The results come across as the purist, unstructured free improv."