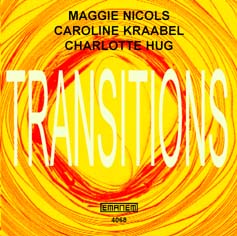 Digital recordings made in London
(at the Conway Hall without an audience)
by Martin Davidson - 2001 June 4
Total time 56:27

"Cage found that in order to be a contributing world citizen, he had, with artifice and discipline, to continually reinvent the 'gift' that life's brutality always threatens to eradicate, the gift of good-humored openness to constructive possibility." - Joan Retallack on John Cage.

It is easy to despair in a time of deepening world crisis, when unrestrained capitalism is reaching its ugly zenith, when corporations have hoodwinked governments to the extent that the pursuit of profit wins out over common sense, when the lessons of foreign policy are not heeded but the lunacy is repeated and our very environment is under immediate terminal threat.

Sometimes it's easy to forget that there are women and men of goodwill the world over who are working for change in infinitely varied ways. Returning to improvised music such as this CD is like returning to a non-religious spiritual touchstone. The musicians come together and ask, "Where are we now?" and take it from there. There is an unmediated honesty, acceptance and openess. These are some of the unspoken principles of improvised music. And its practitioners do the essential job of reminding us that another world is not just possible but actual.

The recording on this CD was only the third occasion that these three musicians had played together as a trio (though some of them have worked together in different configurations). The first occasion was in autumn 2000 when they played in Maggie Nicols' front room and the second was a concert performance at the Freedom of the City festival in May 2001. The pieces on the CD are in the order they were played with only a little editing between tracks.

The recording is more intimate than a concert yet retains an openness. There is an awareness of the space, and an awareness of a fourth life present since Caroline was six months pregnant at the time with her son Clement.

Individually each of the three musicians pursues distinct artist endeavours. Charlotte's solo work explores the performance potential of unusual spaces from sound-proofed S&M dungeons to subterranean Roman Baths; Caroline's emphasises the uniqueness of live performance whether with her group of 20 female saxophone players, Mass Producers, or her one-woman mixed-media performance pieces; and Maggie has a long and rich association with improvised music and workshop projects which explore the liberating, empowering and transformative potential of improvised music.

Together, the three voices - two instrumental voices and Nicols, who uses her voice as an instrument, subsuming herself in the instrumental interplay - abandon the preconceived and tap into the directness of the pre-verbal. That's also the key for entering this music as a listener: abandoning preconceptions and mediating thought in order to hear the music directly.

The acoustics of the Conway Hall proved to be a good choice. This simple, medium-sized, wood-clad hall with a stage and seated gallery has a long history of involvement with improvised music. Besides many one-off concerts, the London Musicians' Collective held its Annual Festival of Experimental Music there from 1991-1996. Last year a new festival, Freedom of the City, started up focusing specifically on improvised music from London.

Appropriately perhaps, the hall is owned by the London branch of the British Humanist Association whose ethic is morality without religion, and belief in human potential. Above the stage is the Shakespearean aphorism "To Thine Own Self Be True".

Now, where were we?

"TRANSITIONS deliciously twists, if not disfigures the old bromides about instrumentalists having a voice, and vocalist having an instrument, as Maggie Nicols, Caroline Kraabel, and Charlotte Hug are all capable of producing such unconventional sounds that their origins are obscured. It is gratifying to hear Nicols in tandem with two of the more promising beneficiaries of her pioneering work. As such, TRANSITIONS is an album of freely improvised music that bucks stereotypes on several levels.

Much of the music, were it scored, could be marked p; rarely does it rise above a conversational volume, even when the comity that pervades their improvisations is supplanted by vaguely volatile forces. This allows Hug's string rubbing and scraping, Kraabel's breathy timbres, and Nicols' gasps, moans and coos to mingle without loss of detail: give the assist to Martin Davidson's no-frills engineering and the acoustics of an audience-less Conway Hall.

Still, there is nothing bucolic about the music. For the most part, there is no suspense in a dramatic sense; but several of the pieces, nevertheless, convey the nerve of free improvisation, as the impulses and the mitigation of impulses by the respective musicians take on a collective shape. This is not to say that the set has no broad moments; in what may be an unprecedented moment in improvised music, perhaps undertaken with tongue in firmly implanted in cheek, Nicols' expletives are momentarily bleeped on No Now. Neither Kraabel nor Hug shy away from a visceral attack when it is neede, as well. .

TRANSITIONS may well be an album that musicians and commentators point to years from now as a milestone."

"Surprisingly TRANSITIONS is only the third time these three women have performed together. Surprising because they perform with such elegant precision that it is difficult to believe they have not been playing together all their lives, or at least for many years. These seven pieces are distinguished as some of the finest music of the genre. There is sensitivity and softness, tempered by an approach that eschews limits so that surprises abound. The fundamental sound of Nicol's remarkable voice plus alto sax and viola works on several levels. At times the instruments seem like props for the voice, but most of the time there is an egalitarian process, where all three merge as one. The ranges of all three are similar, too, weaving lines that meld and then unravel mysteriously. On Undercurrents, Nicols cries like a wounded cat, and moans like a woman giving birth, while on the incredible Hymn Indoors, there is a simplicity that reflects a mesmerising commixture of blurred vibrations. This is serious free improvisation, with roots digging back to the 1960s, but it retains fresh, vivifying, and uplifting qualities based on constant changes and disruptions. It is hard to believe that the sounds were created by only three persons; the complexity, diversity, and pristine beauty of the product signal a hearty embrace of the non-commercial, while pure exhilaration fills the recording."

"There are not enough women in free improvisation. Coming across an all-female trio like this one, the statistic becomes a burden: we need more women in free improvisation! It would probably be cliché to write about the special sensibility and sensuality they bring to the genre, something no man can emulate, but the fact remains that this session between vocalist Maggie Nicols, saxophonist Caroline Kraabel and viola player Charlotte Hug is pure gold and that one wishes there were more like it to go around. The acoustics of the Conway Hall apply extra lustre over the seven pieces. The three musicians move like a three-headed entity, but Nicols' distinctive voice tends to lead them. Not that she shuts out input from the other two, but her 'voice' is the most distinctive of the group and it acts like a pied piper. The highlight is Hymn Indoors, incredibly synergistic and rapturing - this track should never end, mostly because of Hug's microtonal textures. Highly recommended."

"Nicols is certainly the most powerful voice here, but she wars her seniority lightly and with the exception of the ferociously polemical anti-rape No Now (a deeply uncomfortable listen) she is in remarkably lyrical form. The three long pieces, Lullaby for Clement, Hymn Indoors and Coming Out, are the best of the set. Hug's viola us sometimes reduced to an accompanist's role in the first and last of them, but she finds a stance on the middle piece and is instrumental in turning it into a thing of real beauty. Kraabel has her own approach to the instrument and though she is sometimes reminiscent of Trevor Watts, no one will claim a profound influence. A wonderful record, and a brave one."

"Gender is a relevant issue here, because many of the qualities that make for successful improvisation are (stereo)typically female - behaving co-operatively rather than competitively, listening and responding sensitively to what one hears, making time and space for the contributions of others… And so it proves here; the vocals (largely wordless; like an instrument), viola and sax complement each other well. The music evolves gently, without anyone forcing the issue or trying to dominate. There are loud and violent passages, but they appear to arise organically, rather than at the behest of any one of the players. An example comes in No Now, where a tirade of expletives from Nicols is prefaced by increasingly harsh sounds from both Hug and Kraabel, so when the outburst comes, it seems natural, almost inevitable.

This recording session was only the third occasion that the trio played together, coming just a month after their live debut at last year's Freedom of the City festival. Given this, they are remarkably sympathetic and coherent, the equal of far longer established groupings."

"One of the most interesting trio improvisations I've heard lately, this CD showcases three different talents in a mixture of personalities resulting in a cohesive, coherent musical exploration. Maggie Nicols' voice gives birth to a constantly shifting palette of colours, extracting any single nuance you can get in a tone or in just a 'vocal gesture'; Caroline Kraabel uses her sax trying to counterpoint as perfectly as one can do - without having a score in front of her - with noteworthy technique and inventiveness; Charlotte Hug brings a spicy, '20th century' Webernian aroma to the concoction, defining this music with a character that's all its own. Great interplay and never a dull moment in almost one hour of music, I'd like to hear more from this formation."