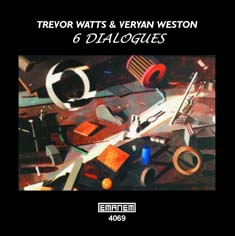 Free improvisation. Some may think of it as the art of 'making it up as you go along'. But it is much more than that. English vocalist Maggie Nicols has spoken of the necessity for a sort of 'social virtuosity' amongst improvisers: chops and instincts and reflexes simply aren't enough to make great music in a free improv situation. One must listen attentively, and approach music-making with true openness. German clarinetist Theo Jorgensmann captured another aspect of that 'something more' quite eloquently: 'An improviser has to do everything… from production to marketing… he has to think socially when playing with others… He is the kind of person society needs today."

In addition to embodying every virtue mentioned in Jorgensmann's quote, saxophonist Trevor Watts and pianist Veryan Weston are artists whose individualism stands out in bold relief. Both possess vital, compelling voices on their respective instruments. Weston is one of a handful of free-improvising pianists leading the charge away from Cecil Taylor's all-pervasive influence. As for Watts, just listen to his alto saxophone sing, soar and exult above the London Jazz Composers' Orchestra on HARMOS (Intakt 013/1989), or with his own Celebration Band on their recently-released debut CD. His is a sound - and a feeling - you will not soon forget, and his musical concepts consistently transcend labels.

Now that some of his earliest work with SME is widely available (via Emanem), Watts could exploit the fact that he, along with John Stevens and Paul Rutherford, helped establish a distinctly British style of free improvisation in the mid-60s. From his work with Amalgam, he could also lay claim to being one of the first to utilise heavily-distorted electric guitar (played by Keith Rowe and/or the completely unheralded Dave Cole) and electric bass creatively in freely-improvised music. It is worth pointing out that Amalgam predated the electric free-jazz supergroup Last Exit by at least one decade.

Instead, Watts established a clearly defined musical existence outside the rarefied Euro-free improv community. The author of Watts' entry in the 'Penguin Guide to Jazz on CD (5th Edition)', goes so far as to claim that he '…has to some extent turned his back entirely on abstract music.' In fact, Watts never saw himself as an exclusively 'free' player. Free improv (e.g., SME) and free jazz (e.g., Amalgam) are just two aspects of Watts' evolution as a total musician, or as Watts himself put it in a recent interview: 'I was always into developing in a whole way. So that all I'd ever learned was encompassed in the one way of playing.' Watts assembled the first of several Moiré Music groups during the early 80s. These drum-centric ensembles integrated trance-like African and Middle Eastern polyrhythms with modern jazz improvisation and Celtic traditional melodies to create a joyous new sound: a sound that was far removed from the watered-down exotica known as 'world beat'.

Though his collaboration with Trevor Watts is now entering its third decade, pianist Veryan Weston is perhaps better known for his ongoing collaborations with three other notable British originals: Lol Coxhill, Eddie Prevost, and Phil Minton. Weston first encountered Trevor Watts while playing at the Little Theatre Club in London during the early 1970s. Weston was a charter member of Moiré Music - he spent a decade with the group, about which he says: '…that was a good learning experience, especially the rhythmic thing…' He is currently part of a group with bassist John Edwards and drummer Mark Sanders that can be heard on MERCURY CONCERT. Together they chart fresh, new sonic territory for that most august of jazz traditions: the piano trio.

While working primarily with his various Moiré groups, Watts kept a hand in free improvisation via a still-unrecorded duo with drummer Liam Genockey. 6 DIALOGUES marks Watts' return to recording in a free improv setting after a hiatus of about 25 years. When asked about how free music has changed since his last recorded foray, Watts states: 'What I like about the scene, now as opposed to then, is that the players seem more open and certainly more relaxed than that previous generation's.'

The music on 6 DIALOGUES is the first hour (no edits, no extracts) of a single 80-minute recording session that took place after a day and a half of hanging out, listening to music, discussing ideas, and walking in the woods. Given their past history, it's no surprise that the rapport between these two virtuosos is, indeed, open and relaxed. The music has an organic, conversational quality, free of contrivances and trappings. Nothing - including self-editing of harmonic / rhythmic impulses - stands in the way of the free flow of ideas and emotions. Weston attributes the success of the music on 6 DIALOGUES, to the saxophonist's '…extremely acute listening ability, which I realise more and more is the key to the improviser's creative skill…,'. I would add that the acute listening Weston refers to is a skill he shares as well.

I enjoyed everything about this music from the start. Weston's angular, excitably rhythmic, and harmonically dense approach to the keyboard provides the perfect terrain for Watts' trailblazing alto and soprano. Occasionally, I get a hint of Weston's formal musical education (he holds a Masters in Music Composition from Goldsmith's College, University of London), and of Watts' extensive experiences in jazz-based improvisation, from swing to free. But these are just reference points in two music careers, and two lives, which encompass far more.

"Active now for more than 40 years, saxophonist Watts has carved out a multifaceted niche, assuming prominent roles with the Spontaneous Music Ensemble, Amalgam, Moiré Music and, more recently, The Celebration Orchestra. His music opens out on more than one front, embracing global sounds as well as jazz and free blowing. Arguably, he's been undervalued as a consequence. Pianist Weston is an impressive, idiosyncratic performer whose decidedly unlocked hands have goaded Lol Coxhill's soprano and Phil Minton's voice to some of their finest moments on record. On these six pieces Weston simultaneously supports and tests Watts, who responds with the kind of hard-won authority that arises only from the exercise of disciplined curiosity."

"Complex but lyrical, Trevor Watts and Veryan Weston's music is the kind of listening that easily transcends any boundary and/or genre. It's obviously deriving from something you could call jazz, but it's more like a photograph of two friends, happy to talk to each other the more they can. Improvisation here is approached in various ways: expert sax lines weaving around semi-consonant chords; percussive clatters in the high register of the piano are underlined by low breaths and mouth paralysing patterns; and many more. Both men come from distinguished careers in several artistic realms; both make sure to entertain us for the whole length of this excellent disc."

"What a great combination!! This duo is incredible and are extremely connected.... yes, it seems that each one of them knows what the other one is going to play next and so they anticipate each other creating a really coherent improvisation (check Unrest Assured where it seems that Watts knows what Weston is going to play and pays a similar phrase over his piano progression). Split Frequencies is an example of more dissonant experimentation by this duo where you can listen to some minor ninths (or minor seconds) intervals that are really clashing with the chords that Weston plays (or he plays these intervals in the chord progression making the result even more weird). This is an improvisational duet with a lot of imagination and an extremely open mind! Favourite tracks: Unrest Assured; Rest Unassured and Spacing and Placing."

"As we might surmise, the duo provides a comprehensive glimpse of what can happen, when two giants of the improv scene coalesce. The musicians' intuitive responses and on-the-fly excursions span a wide-ranging spectrum of styles and fabrics of sound. They render dreamlike notions and contrapuntal motifs amid various peaks of intensity on Unrest Assured. Whether performing on alto or soprano sax, Watts provides an evasive edge as Weston often serves as the instigator. This jubilant union of the musical spirits features a potpourri of minimalist overtures, circular patterns, and flowing thematic initiatives. Much of the excitement is based upon the artists' gravitational exercises - where they counterbalance rhythmic flows with resiliently enacted micro-themes. With Finding & Binding, Weston redirects matters via a sequence of rippling lower-register arpeggios amid Watts' fluttering lines and wistful interludes. They also meld a bluesy gait with abstract angles and blistering forays. Yet, this effort might also serve as an educational lesson for youthful musicians eager to delve into matters, that cannot be taught in school! (Highly Recommended)"

"There are inevitable echoes of Amalgam on the opening track and the long, pondering Rest Unassured. Here, Watts sticks to his alto, which still sounds like his natural horn. It pitches more comfortably round Weston's classically aware piano lines. Of the soprano-led pieces, the closing Spacing and Placing is the most substantial and is also the most impressive performance from the pianist who makes a nonsense of the usual clichés about 'angularity'. His rhetoric is instantly graspable and yet teasingly enigmatic. It delivers, as does Watt's saxophone, immediately and almost physically, and yet you'll find yourself revisiting these fine improvisations for days just to hear two fine musicians in affectionate and thoughtful dialogue."

"And herein, lies some quite lovely music. Veryan Weston and Trevor Watts have known each other a long time. Weston was a charter and long-serving member of Watts' Moiré Music group and it's not surprising that these six tracks reveal high levels of empathy between these two musicians.

Watts' sour and angular alto and sinuous soprano fit well with Weston's lyrical and yet rhythmic piano. This is, at times, music remarkable for the fact that it is composed in the moment. It sounds like both men know exactly where their partner is at any given moment and are ready for whatever comes next. And yet at the same time, it has that super-live spontaneity."

"This is Watt's first free-improvisation record since the '70s. When he parted company with John Stevens, he took a very different musical road, and enthusiast of the 'Golden Age' will immediately warm to the sound of Watts' plangent alto following an uncharted course on Unrest Assured. The companion piece, Rest Unassured, is better still, as is the soprano outing on Split Frequencies, all of which shows that his chops haven't been in any way compromised by more than two decades of playing riffs and minimal ostinati. Weston has immediate rapport and understanding, and when the two nudge away at a single idea for some minutes, as they do on the three closing tracks, it's hard to resist. This gives fair promise that Trevor Watts can still deliver wholly improvised music."