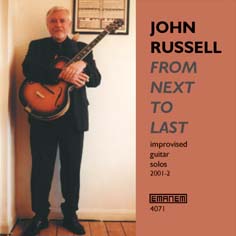 FROM NEXT TO LAST

John Russell first appeared on the London improvising scene in the early 1970s as a teenage would-be rock musician, with a solid guitar whose amplifier had a habit of picking up the radio. Since around 1977, he has concentrated exclusively on acoustic guitars. Over the years, he has performed in duo with several musicians - John Butcher, Stephan Keune, Phil Minton, Evan Parker, Roger Smith, Gina Southgate and Roger Turner - and in too many larger groups to be mentioned here. The monthly Mopomoso concerts that he has organised (with, until recently, Chris Burn) are perhaps the longest running series on the London improvising scene.

He brought three guitars and sat and played in my lounge for a couple of hours. Two guitars were actually used (without overdubbing) on Psiotic, but otherwise he just used one guitar at a time. The first five tracks on this CD are his choice from this relaxed session (not quite in the order of performance).

A few weeks later, one of the groups booked to play at the monthly Mopomoso concert had to cancel at the last minute, so he decided to bridge the gap with a solo performance. Thanks to the omnipresent Tim Fletcher, this fine solo can be heard complete as Mopomoso 2002.

"There is a certain delicacy to the subject of freely improvising guitarists - particularly British ones - whose names don't happen to rhyme with Erik Pailey. One approaches their recordings - or doesn't - with trepidation, disdain or a certain scepticism that could be summed up with the words, 'Is he a clone or not?' The ongoing, drenchingly thorough documentation of the London improvising scene conducted by Martin Davidson's Emanem label provides, happily, ready answers to these assumptions, and one is glad to report that two guitarists - Roger Smith and John Russell - are individual improvisers who, to varying degrees, successfully stand outside and beyond Derek Bailey's gigantic shadow. Of Smith, this writer hath written here before; of Russell I'm relieved to say that his recent CD of solo acoustic improvisations, FROM NEXT TO LAST, not only has a tasty cover design, but it constitutes a very worthy example of the kind of inside-out exploration of the possibilities inherent in that fascinating instrument that, I think, will stand as one of the great achievements of 20th-century music. And when that history is written, track number two, Back Seat Witch, will be cited. Yes, the usual atonal 'talking' language, but here it's given room to breathe, each chopped, percussive figure fading, isolated; every torn harmonic and snapped ping from behind the bridge and sideways finger wisp magnified, allowed to stand on its own. Only in string music could such 'materialism' as this be so darn satisfying to the senses! In my firmament, give this five stars."

"Guitarist John Russell was caught up early in Derek Bailey's wake - not as a slavish imitator, but as a musician aware of the older guitarist's example and the avenues it opened. He has kept impressive company since, playing with testing musicians such as saxophonists Evan Parker and John Butcher, pianist Chris Burn and percussionist Roger Turner. In group improvising he has often appeared a constructive but unassuming figure, however, and solo appearances on record have been rare.

FROM NEXT TO LAST goes a long way towards remedying the neglect: six solos using three weathered acoustic guitars, designed for jazz playing, with f-holes and metal strings. Ringing harmonics, dry chords and dampened notes recall Bailey directly, but Russell's own musical character is confirmed throughout. The decisiveness of his plectrum attack is striking; it has a singular quiet aggression and it's certainly strong in rhythmic confidence. Customarily incidental sounds of fingers lifting from the fretboard or sliding on it here become elements of a distinctive style. Russell respects what the instrument can do and takes evident pleasure in it. John Russell has spent more that 25 years working in the shadows. Catch him while he's in the open."

"The music has a quiet tonality that progresses in staccato fashion into a flowing demonstration of instant composing. Russell induces a ringing tonality from his guitars. Full strumming and delicate picking go into creating the sonic mysteries that unfold as he experiments with multiple forms of improvised sound. Jagged edges are a major part of his dissertation, but Russell supplements them with fluidly emerging lines of crystalline clarity. There is an introspective aspect to the music, as Russell burrows into the core to eke out aural spontaneity. Russell's music is demanding of strict attention, which allows all the nuances and subtleties of his creative mind to be appreciated."

"It is remarkable that FROM NEXT TO LAST is only John Russell's second set of solo recordings, his first being one side of an Incus LP he shared with Richard Coldman. That was nearly 25 years ago. Even by then Russell had carved out an astringent, forbidding niche as a post-Bailey guitarist who, whilst unafraid to wear his influence on his sleeve, was taking Bailey's atonal, mixed-timbre cascades, jagged lines and unearthly chords to new heights. Bailey seemed almost romantic next to Russell. It's a fine pleasure, then, to hear Russell on record in what is surely his supreme setting - solo. And again we have Martin Davidson to thank for documenting this set of improvisations (at home and in performance) recorded in 2001 and 2002. So what's changed? Russell's trademarks: his caustic acoustic and his severe stylings are in these new recordings filtered by a less hurried, almost reflective purposeness. It's as if the intervening quarter-century has left him not with less time to play, but more space in which to explore. There is a delicacy here that sits extremely well with his enduring, intrepid approach to guitaring."

"I must say it's not easy to follow seventy plus minutes of acoustic guitar free improvisations, but it's much easier when one can feel a pureness of sorts... Such is the case of John Russell, who played his instruments in Martin Davidson's lounge for a couple of hours and got the job done with good marks; every single string nuance, the guitar body's vibrations, even coughing... All well documented in a record that keeps your senses awake and requires careful listening. Fans of Frank Gambale, Scott Henderson and the like... stand well clear off this man!"

"This CD presents us some improvised acoustic guitar solos from guitar master John Russell. The recordings are a showcase of spontaneity in Russell's playing. Here Russell shows us many different aspects of his musical personality: from the softer side in many places of Jambridge to the more frenetic one in places of Truckinge. This man knows how to extract millions of different sounds from his guitar : from noises, to sounds that are almost impossible to discern and to melodies that are really dissonant. This is an album with plenty of improvisation and experimentation. Favourite tracks: Mopomoso 2002; Truckinge and Jambridge."

"The solo record is a useful place to study Russell's techniques and ideas and how they go together to make up his music. The debts to Bailey's playing are more obvious here, perhaps, although his tonalities are even more abstruse and a sense of fractious timelessness - rather than forward impetus - hangs over the improvising, as if he had as much time as he wanted and that bothered him. A very fine disc."