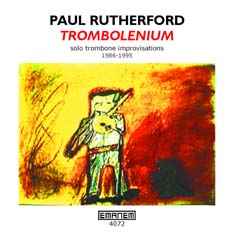 Paul Rutherford's first solo (i.e. unaccompanied) record, THE GENTLE HARM OF THE BOURGEOISIE (1974 - now on EMANEM 4019), is rightfully recognised as one of the masterpieces of solo improvisation. This was followed in fairly quick succession by OLD MOERS ALMANAC (1976) and the overdubbed NEUPH (1978), neither of which has made it to CD. Since then, there have just been some solo performances issued as part of CDs on Emanem and Slam, so it is obviously time for another collection of his unaccompanied work.

Actually, I had already decided this when I started issuing CDs in 1995, and I arranged to record him at the Red Rose in north London both in the afternoon (with nobody else in the room) and the same evening (with an audience), but this was not followed up at the time. The two Red Rose Afternoon pieces were the first recorded, and the best, that day.

Two years previously, he performed a magnificent solo set at the Europa Festival Jazz in Noci in Italy. This is heard complete as the two Walnut pieces.

The year prior to that, there were two improvisations before a small audience in the very dry acoustic of the China Pig in east London. These have been edited somewhat for various reasons - an unrecorded start, a relatively dull moment, etc - but give a good indication of his inspiration that evening.

The final selections go back to the mid-1980s in a very resonant church (with some traffic noise) near his home in south-east London. The beginning of this performance was a bit tentative, with the trombonist adjusting to the acoustics, so Stlaf is made up of four edited fragments. The other three sections followed on as heard (with only the gaps between them being edited), and offer excellent examples of his use of his voice to create multi-phonics (a technique that Albert Mangelsdorff originally learnt from him).

At the time of writing, Rutherford is playing extremely well again, having recovered from a serious illness a year ago. Maybe it's time for a new solo record…

"The solos collected on TROMBOLENIUM leave no doubt that Rutherford is one of improvised music's true giants. Different venues bring out different aspects of his playing, but wherever he performs sparks fly. Continual flashes of technical brilliance impress, but it's the shaping sense, embedding these glints within a coherent and directed flow, that really cofirms Rutherford's structure."

"A 1993 gig from Italy is the standout: a wide-ranging 19-minute track is followed by a five-minute encore featuring an especially intent examination of multiphonics. It's followed by two contrasting London dates. The dry acoustic of the China Pig lent itself to quick-moving linear improvisations: China Pig Lament is, despite the title, very limber and bright, with even a few touches of implied swing. By contrast, St Alfege's extremely resonant environment prompts, at one extreme, some mock-classical moments, and at the other, a strong attention to pure sonority (there's again some fine exploration of voice-produced multiphonics on this session).

On all four dates, Rutherford's solos are tautly organised, spare and fundamentally melodic. He uses his instrument's harsh brassiness and volume sparingly, and eschews mutes. If there's a continuum in solo improv between the relentless speed, amelodicism and complexity of Evan Parker and Derek Bailey, and the spare lyric meditation of Lol Coxhill and Steve Lacy, Rutherford would be somewhere in between but closest to the latter pole. Inevitably a demanding album, TROMBOLENIUM is nonetheless never forbidding. It provides further proof that the early 1990s were extremely fertile for Rutherford."

"Although many of his contemporaries have routinely performed solo and continue to do so, Rutherford's approach is distinctive. His highly developed sense of form almost makes it seem as though he's improvising complex (if occasionally whimsical) architectural drawings rather than music, but at the same time he's relentlessly unstuffy, consistently inventive, able to allude to any aspect of the instrument's history within the space of a few notes while at the same time being able to convey extended techniques equally concisely. All of the above are represented here in varying degrees, but there are also pleasing elements of contrast between the pieces, which are divided in both time and space. In particular, the diverse acoustic environments of the four venues where these pieces were recorded seem to inspire Rutherford in a variety of ways."

"Rutherford's understanding of natural acoustics borders on the encyclopaedic and his abilities in this regard are on broad display in each of the four performances from which the program is culled. Recording clarity remains consistently clean across each of the pieces in spite of varying venue circumstances and each room affects Rutherford's approach in subtle ways. First up a pair of improvisations from London's Red Rose, a space conspicuously absent of an audience on the occasion. The two pieces visit the trombonist in a loquacious mood, firing off round after round of moistly rendered sound clusters. Whinnies, snorts, chortles and eructions are all part of his chosen dialect, along with some beautiful legato passages that flirt with more melodic possibilities. Everything feeds into Rutherford's regular vernacular and the combination of sounds forms a fine balance between the woolly and hermetic.

The Walnut pieces possess a more brittle built-in sonority, perhaps due in part to what sounds like more cavernous auditorium dimensions. While somewhat longwinded from a purely temporal standpoint, Rutherford packs a surprising amount of sonic variety into nearly thirty minutes of improvising, exercising both supreme stamina and invention along the way. Initially sparser in his delivery, he takes clever advantage of the room's inherent echo, injecting snatches of silence and plumbing his instrument's most intimate recesses with measured breaths. Later low rumbles and gurgles jockey with plangent higher pitches and shrill metallic blats. At one point he even uses his oiled slide sans channeled breath to create a spate of percussive sounds that sail off into a short-lived silence.

Judicious editing streamlines the tracks taken from a gig at the China Pig where Rutherford takes the location at name value and aurally approximates the boisterous antics of a champion hog rooting for prized truffles. Shorter in size, the disc's concluding four pieces are of the earliest vintage. A showcase for Rutherford's legerdemain multiphonics, they explore this particular breed of extended technique in garrulous and, at times, gratuitous detail."

"Unaccompanied trombone solos by the great Paul Rutherford, dating from 1986 to 1995 and recorded in various venues - that would be enough for me! But I must explain something for the (eventual) newcomer: imagine a man whose only desire is expressing himself through his instrument, without getting too cerebral or immersed in his own stream of consciousness; what you have is a boundary-transcending, always lyrical, funny but serious collection of great melodies and rhythmic sketches, characterised by a gorgeous tone. I compare these tracks to different kinds of exotic birds, each one with his own way of flying and spiralling in the air, sustained by the wind."

"Here you have a man with his instrument who is always achieving new sounds and combinations that have not been tried by many musicians before him. In fact, Rutherford is exploring new paths on each track that one can listen on this CDs. In some tracks like First Walnut he uses sonic explorations trying to reach weird sounds with his instrument. In other tracks like Red Rose Afternoon 1 he uses a lot of legato notes to create dissonant melodies and complicated phrases. It is amazing also how warm this instrument sounds, being not loud and not over abused, reaching interesting melodies through all the CD. For lovers of exploring new sides of the music spectre. Favourite tracks: First Walnut, China Pig Lament and Flast."

"Almost a decade's worth of solo performances. The sound quality, or rather the acoustics, vary enormously, and it is interesting to hear how responsive Paul was to different environments."