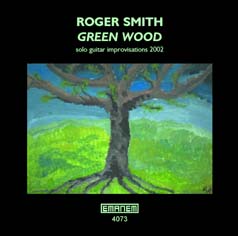 Roger Smith hasn't been heard much in public in recent years - so much so, that some younger commentators are beginning to think that he is a myth. However, he has been playing his guitar regularly in his flat in the north London suburb of Wood Green. He usually plays for several hours in the middle of the night and early morning, as well as going for a run before the traffic pollution soils the daily air. (He generally sleeps in the evening, and works as a lecturer and guitar tutor in the day time.)

Since he plays while most others are sleeping, his playing has become perhaps even quieter than before out of practical necessity. All the music on this CD was performed with his fingers, without the use of a pick, and without any amplification. The guitar is the one he usually used with the Spontaneous Music Ensemble, a group he worked with until the untimely death of its leader John Stevens in 1994. (Incidentally, apart from Stevens, he was the musician who spent the most years as a member of the SME.)

Several hours of music were recorded over several nights, and it was left to me to make selections for this CD. This was by no means an onerous task, especially a s the guitarist had let me know that he considered his best playing to be towards the end of the sessions. So most of the chosen music comes from the third and last tape. The pieces are generally complete as performed, but some edited extracts have been used.

So here is another substantial selection of superb guitar improvisations. This body of work should prove to all and sundry that Roger Smith is not a myth, even though he is often not to be seen for long periods.

"Collated from several hours of DAT recordings made in his kitchen, it's no surprise that his music is quietly intense and totally acoustic, played on a finger-plucked Spanish guitar. The resulting album is sparsely beautiful, highly disciplined and intrinsically profound.

Smith has a confident understanding of the instrument's sonorities, bringing these qualities to the fore in his improvisations. Because the plucked nylon string does not have such lasting resonance as its steel cousin, Smith's approach is to highlight the percussive quality of the struck note. With such a quick delay, his pieces have a taut, staccato feel which he offsets against the more tolling tones available from his steel-wound bass strings. He occasionally uses an arpeggio technique, while Waltz with Heating evidences a fondness for harmonics. On Strange Interlude, he deadens the strings to produce a dampened tone. In all this is highly individual playing.

There are three length improvisations on show here, interspersed with short, one or two minute vignettes and longer sketches of six to eight minutes. Extended Ploy, Diminuendo & Crescendo in Green and The Last of the Season are all concise and masterful exercises in building structure with extended technique. Here, strings are plucked, pushed, pulled, stroked, oscillated, taped, distorted and scratched to create falling or toppling cadences, sounds and textures.

His compositional use of space is especially telling in those instances where he lets a plucked harmonic decay completely before filling the void. Playing quietly does not preclude playing with intensity. His pieces are tightly focused, and he is not adverse to using syncopation to motivate a part, which he might abruptly terminate or interweave with non-linear note clusters.

In all, Smith is a complete guitarist, both technically and emotionally."

"Despite his long tenure with John Stevens' Spontaneous Music Ensemble, one of free improvisation's most important groups, guitarist Roger Smith remains a shadowy figure, under-recorded and rarely seen live. Working as a guitar tutor by day and sleeping in the evening, Smith improvises by night at home in North London's Wood Green, where these twelve improvisations were recorded in his kitchen (with occasional contributions from the central heating system).

Smith's choice of nylon strung classical guitar marks him out from his steel string totin' contemporaries John Russell and Derek Bailey. Though there are abstract episodes of string abuse (at one point during Diminuendo & Crescendo in Green he sounds as though he might be unwrapping a very sticky toffee that's dropped inside his guitar), for the most part Smith's tone is lustrous, lyrical yet unsentimental as he conjures up dense, knotty arpeggios, resonant harmonics and plangent chords.

Similarly, the longer improvisations are revealing; Smith hovers over an idea, works on it, listens, moves on. Sometimes he seems to reach an impasse, till he lays back or abruptly switches direction. He's always present in the moment and unlike Bailey or Russell, his longer pieces seem imbued with a strong sense of narrative.

The shorter, more abstract pieces (Local Twang, Arse Myth, Strange Interlude) are rigorous explorations of extended technique. In contrast, the gorgeous Waltz with Heating is a performance of simple, restrained beauty built around bell like harmonics and rippling chords.

Derek Bailey once said that maybe the only true free improvisation is solo improvisation. GREEN WOOD is not necessarily proof of that, but Roger Smith's lucid, honest music couldn't have been arrived at any other way. Recommended."

"Roger Smith has arrived at what must be freely improvised parlour music. This, the latest of his occasional solo recordings finds him sounding more and more like, well, roger Smith. A typical SME performance saw him pouring gigajoules of energy into playing a music which grew ever sparser in its outward manifestation, as if most of what he was doing was only audible in some other reality. The energy's still there, but listening to this CD is an entirely different experience. Intricate, mercurial, full of conviction but entirely devoid of conceit, GREEN WOOD is like a complex origami sculpture expressed as music, extening itself, folding back on itself, seemingly having more than four dimensions. Really quite beautiful."

"Smith uses a Spanish guitar without amplification, which leads to a gentle, flowing tone to the session. All of the pieces were recorded at Smith's residence, and each contains enchanting beauty to go with the spontaneous nature of the compositions. Although totally improvised, there is a lyrical quality to the playing of Smith. He coaxes out melodic phrases that appear to flow effortlessly from his fingers. Although Smith inserts semi-abrupt twists and turns in the sequences, the music often takes on the characteristics of a brook meandering through a forest. His pieces are highly challenging but retain a sense of tranquillity. The gemstones of this recording glisten in the sparkling current."

"We have the chance of listening to a more melodic side of this great musician and guitar player. First of all we see that the music here is really quiet and melodic and that is due to the fact that Smith has recorded this CD at home and he plays during the night hours. This is interesting because we can see a more subtle side of his musical personality. Here we can listen how Smith constructs his guitar lines while harmonising them ...and he has played through all this recording with his finger in order to achieve a warmer sound very different than the one that one can achieve using a pick. There is heavy use of natural harmonics in tracks like Extended Ploy and the most amazing thing here is that all this material is improvised. Thumbs up for this amazing musician and innovative guitar player. Favourite tracks: The whole CD. I love Smith´s guitar playing. IS experimental and at the same time very melodic."

"Though each of these 12 pieces is improvised, there's a strong sense that each one is a developing composition. In a strange way they're like half-remembered songs of fragments of different tunes strung together and Smith is clearly not frightened by things like melody and harmony. At times, as on Wood Green Waltz, it sounds as if the piece is about to slip into a regular, if raggy, waltz and piece such as North 22 (No Catch) sound like they're about to burst into a flamenco sort-of-thing. The two longest pieces on the album, Extended Ploy and Diminuendo & Crescendo in Green, certainly sustained my interest and suggested a quiet and gentle but talented improviser."

"Roger Smith can be wonderfully tenacious in his playing, following a fleeting idea long past its expected demise. This quality is best heard in his solo improvisations. It is on particularly impressive display on GREEN WOOD. His music - quiet, performed on nylon-string Spanish guitar - conjures different emotions than that of his similarly-equipped countrymen Derek Bailey and John Russell. Smith's music is introspective and built of little figures and events, and it's often traditional in its commitment to narrative logic, however gauzy the connections might be. The music is ruminative, though Smith will barrel down any number of coarse or challenging topographies if the musical kernel calls for it. Like many other free improvisers, he doesn't seem to care much for form, in terms of the beginning and end of performance, or the framing of ideas.

GREEN WOOD was recorded by the guitarist in his flat on a number of DAT tapes, which were edited, named, and sequenced by Emanem label boss Martin Davidson. This sort of organic, haphazard approach to the presentation of the music does allow for certain benefits, I'll admit - the need for listener's perseverance, perhaps mirroring the guitarist's own, may be a strong contributing factor to the generation of a bittersweet and poignant mood throughout the work. But those that thrive on form be warned, this is a musician that invites you into his process; you can hear how he works, and he arrives at brilliant moments, but don't expect it to be dressed up and packaged for you."