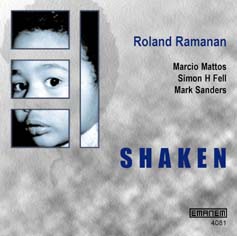 This album is dedicated to the memory of my father Shake Keane, a great trumpeter & flugelhorn player and poet who (amongst many other things) played alongside the pioneering alto saxophonist, Joe Harriott. I will never be a tenth of the musician that he was, and although I never got to know him that well, he remains an inspiration. He died in 1997. I am sure I have been influenced by Shake's eclectic and individual style and his role within the Joe Harriott quintet but I don't try to play 'like him' - I never could. So 'Shaken' is how I felt at the first recording session, how the musical ideas have been combined (not stirred) and 'of Shake' but not Shake.

It was my intention with this project to indulge my long time interest in the grey areas between composition and improvisation, and to this end most of the pieces have some organising principle. I wanted a group capable of reflecting my love of jazz, but also the more abstract forms of sound-based improvisation. All this and a consideration of what (some) people might actually want to listen to in their own homes. This is a tentative first step (I have been described as a late developer). I hope you like it.

I had a good idea of the kind of line-up I wanted for the album for a long time. I love playing with Marcio on cello, and his subtle use of digital delay and various pedals gives the group an expanded timbral palette. Mark was an obvious choice for drums - he can play everything superbly - and Ian Smith suggested Simon Fell on bass. Simon, besides being an accomplished and hugely resourceful bassist, is a composer I have a great deal of respect for, with a superior grasp of the ideas I was attempting to implement. I had played with all these musicians before so I felt really comfortable with them.

I was born in London on 4th February 1966. My primary school got in a peripatetic brass teacher; I was hoping to play saxophone but settled for the trumpet. Jazz was the music I grew up listening to and I gravitated more and more towards the free end of the spectrum whilst continuing with classical lessons at secondary school. I got involved in the improvised music scene after coming back down to London from Hull University in around 1987.

My first experience was attending Phil Wachsmann's near-legendary West Square, Morley College workshops. Around this time I also started reviewing records for the Wire magazine. In 1989 I attended a John Stevens 'Search and Reflect' workshop. This was a big eye-opener in terms of the disciplines of this kind of music, but more importantly John gave me the confidence and the opportunity to get out there and perform. John helped me form a group called 'Swift' that featured Nigel Coombes, Roger Smith, John Rangecroft and himself. I took my first step playing a scary, grown-up improv gig in November 1989 at the old Jazz Café in Stoke Newington.

Exploring the boundary between composition and improvisation has always been the driving force for me. Subsequent short-lived groups with Eddie Prévost and others explored this area with varying levels of success and helped me find my feet. I also played a few times with saxophonist Jon Lloyd between '89 and about '93, and he gave me a lot of encouragement in those early days.

Around '95 I formed the group Wooden Taps with Marcio Mattos on cello, Maggie Nicols on voice and taps (the Fred Astaire kind), Michael Garcia on marimba, and myself on trumpet and wooden flutes. This was a purely improvising group and a great joy to play in.

By this time I had two children, a full time job in education and not much energy left over. I played very few gigs and was on the verge of giving up playing all together. Then I got call from trumpeter Ian Smith, asking me to join the London Improvisers Orchestra. LIO was my saviour and has formed the bedrock of my current playing. A solid base from which to make an album instead of just day-dreaming about it. I have been described as a late developer, so I hope this is worth the wait.

"There's a revelation here. I just had read the name of Ramanan as reviewer on THE WIRE magazine but never heard him playing before. SHAKEN is his first CD under his own name and, in my opinion, a very good debut. Gathering two/three definite influences in his trumpet style and giving a well indicated direction to his way of composing, Roland leads the quartet to territories ranging from the almost 'detached' free playing of various European jazz projects to forms of invocation that call for attentive concentration, from players and listeners alike, particularly during the wonderful bits in which Ramanan takes his wooden flutes in a prominent role. This music has a character of extreme elegance linked with passion and suffering, like a stairway to a better life after a road full of obstacles. Marcio Mattos and Simon Fell's strings add the gift of extremely beautiful drones and sounds that help this project's walking, together with the ever-evolving rhythmic developments of Mark Sanders. Must be listened many times to fully appreciate it: SHAKEN is the promise of a growing new talent."

"This album may be Ramanan¹s first under his own name, but he was already an experienced player with solid jazz and improv backgrounds. Cellist Marcio Mattos, bassist Simon H. Fell and drummer Mark Sanders form the back-up band, even though the distinction between leader and accompanists is kept to a minimum. For the most part, SHAKEN consists of a free jazz venture. Ramanan devised most of the pieces, providing structures, ground rules, occasionally heads or other bits of written-down passages. His playing extends Don Cherry's explorations, tapping into the atavistic soul of the human kind yet, despite the free improv setting, swinging, remorselessly and irresistibly swinging. Sanders answers that call by riding the cymbal more than usual. Mattos and Fell keep the music floating at more abstract altitudes and the light tension between these two poles are what keeps these pieces lively and on the edge. The blow-out break and the slow, pensive before stand out, but overall SHAKEN makes a very convincing debut."

"SHAKEN is an exceptionally mature debut, not surprising given that it is about 15 years in the making. Ramanan's intent was to explore the middle ground between composition and improvisation. Subsequently, formal descriptors such as 'ballad' and 'freebop' can aptly describe some of the pieces. Others are freely improvised without obvious structural templates. Yet, regardless of tactics, there is a vibrant spirit to the proceedings which flows from Ramanan's stylistic and temperamental proximity to Wadada Leo Smith. Despite lengthy passages of searing intensity, SHAKEN is a very introspective statement. You don't need to read the notes to know that Ramanan has tapped into something deep.

Ramanan's cohorts impressively complement both his playing and concepts. Whether evoking contemplative calm on before or igniting a firestorm on break, Mattos, Fell and Sanders unfailingly employ the right proportions of muscle and finesse. The enable Ramanan to articulate a trumpet lexicon over the course of the album that is equally cogent in both post-Ayler free jazz and post-Stevens spontaneous music environments. He has an unerring sense of how to bend a phrase in an unexpected direction and how to coalesce a swirl of textures with his command of tone colour. Ramanan is so spot-on so often that it gives the dream deferred tip of SHAKEN a real poignancy. The irony is that in all probability Ramanan had to wait this long to make an album this good."

"Both the album title and the voluminous, chatty and (unnecessarily) self-deprecating liner notes remind us that Roland Ramanan is the son of the late Shake Keane, trumpeter on Joe Harriott's legendary 1960s albums, and that despite studies with John Stevens and stints with the London Improvisers Orchestra, Ramanan's jazz background is ever to the fore on this, perhaps the most 'jazzy' Emanem release in recent months. Only four of its ten tracks were 'entirely improvised'; the others were conceived - as opposed to composed - by Ramanan before and during two studio sessions for which the 36 year old trumpeter gathered an impressive group: cellist Marcio Mattos, drummer Mark Sanders and bassist Simon Fell (who positively revels in the compositional stratagems used in pieces like showers). Ramanan's fragile upper register and occasional use of wooden flutes recalls Don Cherry, and Sanders swings along busily on the opening before, rides the cymbals like Jon Christensen on promised and adds some nifty brushwork on the final forgotten, which the trumpeter unashamedly describes as a ballad. Of break, he writes: 'To cut loose and really blow out is often considered primitive and uncouth within the ego-less, collective world of improvised music' and then goes right ahead and does it (that's jazz..). SHAKEN is an impressive debut album and one his dad could feel mighty proud of."

"Roland Ramanan makes an impressive debut on SHAKEN featuring an invigorating supporting cast. Ramanan rises to the high level of his cohorts in a variety of settings, guided by his enticing, poignant conceptions that not only emphasise five quartet compositions, but also the splintering of the group into smaller duet or trio parings. The terrain covers the exotic (before), the meditative (forgotten), the minimalist (showers and the that's that), freely improvised excursions (the next and worth remembering) and stirring drama (break). While all musicians play at an advanced level, Fell's and Mattos' interactions are electric, particularly when they pick up their arcos. As expected, Sanders is at his creative and imaginative best. This is a vibrant session that documents another talent from the fertile London scene."

"A contrastingly plangent, rather melancholy trumpet tone out of Miles Davis and a varied set of compositions make for an engrossing release."