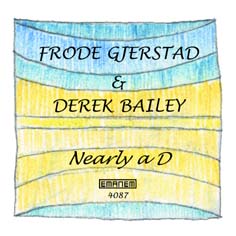 I have only played three concerts with Derek Bailey. They were back in 1992 in a trio with John Stevens. I recorded the last concert we did and basically forgot about it until two years ago. To make a long story short, Martin Davidson heard the tape and released it as HELLO GOODBYE (Emanem 4065).

In August 2002, I travelled to London to record some sort of 'follow-up' tape with Derek. We met at his flat, talked a bit and then recorded in his office.

Derek Bailey has been doing this kind of thing for years and years with a stamina and dedication very few others can match. He is still playing concerts, recording and producing for his own label as well as many other labels - all with lots of different musicians. He has achieved what most of us only can dream of.

"Matching Norwegian woodwind player Gjerstad with British guitarist Bailey is an intriguing experiment in unabridged sound construction. Both men have been investigating the outer regions of sonic development for decades but have had only limited opportunities to make these adventurous treks together. The results are fascinating. Gjerstad ekes out a series of disjointed phrases that instantly knit together to form an endlessly flowing rush of agitated acoustic magic. He builds his freely spoken phrases in elongated layers that become increasingly intense and emotional, reaching pinnacles of sound purity on each of the six tightly interlaced selections.

There is something amazingly complex yet astonishingly simple about the guitar maneuverings of Bailey. He is typically a sparse user of notes, being able to make emphatic statements with a minimum of execution. These singular pronouncements unobtrusively evolve into elaborate muted statements where the blunted edge of his timbre is a dominating and all-encompassing factor. His improvisations have brilliant luminescence despite the dulled tonality that characterizes his work. Neither Bailey, nor Gjerstad, however, work in a vacuum. The music on these duets is the product of their closely defined interaction and their responsiveness to the circulating vibrations. It becomes a spicy brew of inseparable concepts that merges into one statement on the state of open improvisation in the 21st century. Gjerstad was absolutely correct in wanting another go at Bailey. It produced improvised sorcery of astounding quality."

"They recorded this delightful set of duo improvisations, some of them punctuated with homey chatter ('How about a cup of tea, then?') and all of them characterised by that strange combination of thorny difficulty and gentle straightforwardness that is the hallmark of most Derek Bailey performances. The album's very long opening track is not its strongest, but when Bailey exchanges his acoustic guitar for a hollow-body electric on Stairs, things immediately get more interesting as his range of available timbres opens up. Gerstad is not exactly diffident around Bailey - he plays with particular assertiveness on Nearly a D and the spiky 'Studio' - but they're playing on Bailey's home court and Bailey is clearly the alpha musician here. The result doesn't have quite the same richness as the Stavanger concert of 1992, but is thoroughly enjoyable nevertheless."

"Gjerstad has a remarkable way of playing right inside Bailey's quick, staccato lines. He finds arpeggios within Bailey's staggered divertimentos. His horns sinew their way around Bailey's guitar (both acoustic and electric on this recording), which is to Gjerstad's credit. While Bailey has certainly worked with other horn players to positive result, it would seem to be a challenge. Gjerstad meets, and rises above."

"Classic free music from two excellent conversationalists. No need to tell you about Bailey's importance in new areas of playing, throughout his life; both on electric and acoustic guitar, his sound becomes better the more he gets older, getting free from the last remaining pieces of web to pick the occasional crystal in the sky. Here, his chordal approach transforms even the harsher dissonances into melting malt, a complete pleasure to listen to. Gjerstad's phrasing is often very fragmented, trying to escape from clichés at any cost, always reaching a good compromise point between technical difficulty and freshness. He could sound a little frosty at times but you can detect a multitude of melodic electrons under the crusty skin of his talkative runs. This is a recording you have to doublecheck in order to get its maximum potential; it will be worth the time you put in there."

"The resulting music can be likened to an afternoon of conversation, at turns convivial, heated and reflective. With Bailey switching between guitars and Gjerstad alternating horns, the set is packed with contrasting moods, spanning the intensity of Gjerstad's alto slamming against Bailey's electric guitar and the fragility of Bailey's acoustic shimmering about Gjerstad's plaintive clarinet. This duo could stand more frequent reunions."

"The disc begins suddenly with Bell, as Gjerstad's slippery clarinet overtones shaping sonic smoke rings that drape Bailey's brittle volume-pedal strums. Thorny and ornery meets lubricious and diffusive as the pair butts tonal heads and in so doing creates an unexpectedly compatible conference of disparate sounds. In its later stages the improvisation begins to fray along its margins with Bailey resorting to swollen nettlesome scrapes interspersed with more detailed picking and Gjerstad adjusting his tone from a willowy rasp to shrill-pitched screaking. The follow-up Stairs resets any lost focus as the Norwegian hoists his customary alto saxophone and the Englishman responds with more pointed commentary from coldly amplified frets. Streaks of pedal-derived distortion crop up at various junctures, prompting Gjerstad to once again flatten and coarsen his tone through arid flurries. Bailey's barnacle-crusted strums puncture holes in the saxophonist's elongated lines and once again the interplay threatens to unravel into isolate individualism.

It's back to licorice stick and acoustic guitar for 'Studio' as Gjerstad spits out a near continuous stream of crinkled reed glossolalia and Bailey once again carves things up from behind tautly strung strings. Only near the close does Gjerstad's tone expand into something approximating the traditional clarinet sound. A Cup of Tea opens at a fast and furious pace and rarely lets up for its densely packed duration. Bailey lays the distortion thick in sections and Gjerstad only rarely removes his reed from his mouth, setting up a near continuous barrage of knotted note streamers that take a surprisingly near-lyrical turn in the track's closing minute.

The banter that begins Nearly a D amusingly explains the disc's title as Gjerstad employs an e-flat clarinet that is 'so old it has become a D clarinet, well nearly a D…' The wide, woody tone he extricates acts in comely contrast to Bailey's tumbling string scribbles and once again a colourful marriage of dissimilar sounds arises. Bailey opens up the piece's middle with some of his most spacious and, dare I say, closely chordal playing while Gjerstad thrusts and parries alongside, hiding out in his instrument's upper balcony register for most of the piece. The finale-sounding Leaving it There acts as an agreeable capstone and opens as almost a lullaby in comparison to what has come before. Gjerstad's clarinet adopts a dulcet, fluttering voice and Bailey's swooping strums also adopt a gentler cast for much of the piece, only turning cantankerous for a brief spell.

Over the entire informal program, the two work like a pair of bristle-tipped pipe cleaners aggressively plumbing listener ear canals in an effort to fully excoriate wax and debris. As such it's not always a pleasant listening experience, but for those who don't mind a little dissonant pain with their music it's usually a rewarding one."

"Bell, the opener, sounds rather hesitant as if a kind of musical reintroduction is taking place but by the second track, Stair, mutual awareness has been crafted on to the newness of the situation. Gjerstad is a confident improviser with a nicely sour tone on alto and a warmer, woody sound on clarinet but it's Bailey who seems to mould and shape these improvisations. He's always been a remarkably sensitive and supportive player. Here, he creates a broad palette of sounds behind Gjerstad's reeds and the approach works well. An almost Spanish tinge emerges on 'Studio' and his use of amplification, harmonics and echo on A Cup of Tea is subtle and superb. A convivial record."

"NEARLY A D starts off, like so many other Bailey related projects, with a muted harmonic acoustic guitar ringing. Gjerstad is slowly creeping in behind him, which sets the pace for Bell, the first and longest track on the album. What becomes apparent throughout the Bell is the fundamental stylistic differences in how the two approach what they are doing. Bailey does what he does best: muted, a-tonal, softly jagged strums and progressions. Gjerstad, on the other hand is coming from a more traditional jazz camp. He never seems to be at a loss of ideas or direction and the same can be said for Bailey. Throughout the album, Gjerstad and Bailey are able to seamlessly weave in and out of ideas and tempos as if it had been rehearsed.

"The album has a relaxed and conversational feel, both players' occasional bouts of sonic aggression notwithstanding. Perhaps as a guest, perhaps out of deference to the senior player, Gjerstad seems more reticent and restrained than usual, but he creates some very beautiful music on his alto, sounding not unlike the early Trevor Watts in places."

"While many of Bailey's duet CDs seem like exercises in distance, this one is adamant about dialogue, reminiscent in some ways of Bailey's duets with Steve Lacy. While Gjerstad is often a direct improviser, he seems to have achieved a special omni-directionality here, engaging specifics that arise in the Bailey scatter style. By the end of the opening Bell, the two achieve an abstract synchronicity. So close are the thought patterns the music enters phases of simultaneous echo in which one does not distinguish initiating and following patterns. Gjerstad is also remarkable in bending into Bailey's harmonics on Stairs, pressing the range of the beautiful. Together the two seem to be borrowing one another's very sounds. Successive pieces grow shorter as the bonds grow closer."