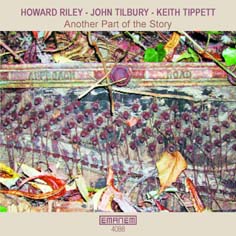 ANOTHER PART OF THE STORY

When I convened this piano trio I asked Keith and John to participate because I felt that we all had different musical personalities and backgrounds that placed us a little apart from what has become the 'mainstream' of improvised music. We were, to use Keith's phrase, another part of the story. Keith and I have been at the forefront of the jazz and improvised music scene since the 1960s, and have worked and recorded intermittently as a piano duo; John has been a leading interpreter of contemporary (and traditional) notated music for a similar length of time, and is also a member of the long-established improvising group AMM. The thought of these personalities becoming enmeshed spontaneously excited me.

This recording was the first time we had played together as a trio. The music is totally improvised with no prior discussion or rehearsal - the only pre-determined factor being that we decided beforehand on an approximate duration (in minutes) for each piece. There was a good feeling right from the first note, with interaction, listening and experience to the fore, and I think these qualities have been captured on the recording.

"Tippett, Riley and Tilbury wisely bring out the contrasts and differences in their personal approaches, engaging with a rapport that allows no treading on other toes, with each player investigating wildly varying patterns and sound dimensions.

Jump Up has John applying drumsticks, Keith freely bouncing loose objects on his strings and Howard rippling continuously, most often playing the sensible vertebrae role. When pianos are prepared, their sound properties can't help evoking a luminous pool of Oriental tranquillity. The trio make up a composite harp-sound on Equanimity, then they link very closely through Equal Play, using traditional sonorities to construct a tune that's shared out between them, finishing each other's sentences in relay form. They get itchy midway, agitated as their paths diverge, becoming competitive and contrary.

Sonorities One (and Two) provide the most minimal moments, rattling faintly, eerily scraping and squeaking with undercover activity. The lengthy Being Prepared also favours trace elements at first, but grows in density, turning once more towards south east Asia, then racing into hectic hyperactivity for the climax. Threeway is much shorter, full of jagged interruptions, sudden spurts and flurries, swapped phrases that are picked up and developed. This whole disc sounds great, with its trio clearly relishing the possibilities of unification. Strong personalities all, yet knowing instinctively when to recede, when to attack and when to blend."

"Since the three have had long established careers, what is striking about the album is the ample room each gives the others. Not working within a composed framework and well aware of the possibility of an unappetizing soup, Riley, Tilbury and Tippett tread lightly.

This delicacy does not preclude energy, particularly in the raucous opener Jump Up, Most of the set though is a slow tumble down from this early ascent. Equanimity has a lush feel to it, initiated by an almost Russian classical glissando by Tippett. The middle of the album is the most exploratory, two tracks, Equal Play and Being Prepared (14:18 and 21:26 respectively) bookending the just over 7 minutes of Sonorities One and Two. Equal Play is tentative, building sparsely over fragments begun by one pianist and continued by another. The pace quickens and the trio rumbles off like a runaway carriage. Though this is certainly avant garde music, a sense of order within chaos is always maintained. Sonorities is an investigation into prepared piano and minimalism. As well done as this approach usually is and of more interest to some than others.

Being Prepared has a slightly more mystical Black Forest feel than normally expected from English improvised music, buoyed by Tippett's quirky arpeggios and the bolt- and clip-armed Tilbury. A beautiful segment comes at the 7-minute mark, featuring compelling work by Riley and chain-prepared piano. It is also the most percussive of the album's eight.

The end of ANOTHER PART OF THE STORY is the most cohesive trio effort, the melodies handed off to each player every few seconds like a baton in a relay. Riley is also the most in the forefront, displaying his unique sense of form, progressive-minded to be sure but shying away from the destructive properties of a Cecil Taylor. The 54-second closer, Pow, lets the three have fun, a manic dash with no fear of the eventual piano-tuning bill."

"I was totally sure in advance that this release would have had me salivating, as the three men involved are all among my very favourites. What I didn't expect indeed is their effort's general tonality, quite often nearer to more tranquil contemporary classic piano pages - Debussy or Ravel spring to mind - than to the masterful aggressive fingerstretching which I thought I'd find abundancy of. That's not to say there's no speed or intricate polychords: there are plenty, of course - and in every minute of the CD the quality level is consistently on the excellent tag. It's just incredible how three strong personalities like Riley, Tilbury and Tippett just don't need to over-impose themselves in the music course, preferring instead a fusion of tempers and a precise overlapping of their improvisational schemes. Then again, I had to expect it because we're talking serious stuff here: ANOTHER PART OF THE STORY is a great, unrepeatable present we all have the chance to put our hands - and ears - on. Relax and enjoy those six magic hands."

"There is a sombre, brooding quality to parts of some pieces, like Equal Play, where they seek out the lower registers to explore dark sonorities before building up an attack with jagged blocks of sound and splintering runs. These extremes alternate throughout and develop a satisfying balance between the participants. Threeway, a briefer statement, allows each player a similar opportunity to pitch in tumbling cascades as well as harsh, angular fistfuls of notes.

Shorter pieces like the two Sonorities make use of prepared pianos, and to some extent all three use these preparations. They create a more abstract terrain where sounds are delicately strung together; the piano interior plucked and emitting zither-like notes while tiny percussive knockings and chirpings mix. It is delicate and offers evidence, should it be required, that free improvisation can produce quiet, reflective music as well as tumult and tempest.

The longest track, Being Prepared also constructs a predominantly gentle soundscape by utilising this method of altering the piano's natural sound. At times it's more like gongs and metal bowls softly struck or someone hauling a curtain of thin wires across a marimba. Like a slightly surreal gamelan they build hypnotic waves that occasional become jagged and fractured creating more turbulence and intensity as the interaction develops.

As with much free playing the success depends on the empathetic nature of those involved, the ability to listen and respond being vital. There is plenty of that happening here which is why I will be coming back this disc often."

"Another three grand pianists on three grand pianos. This certainly is an unusual trio of pianists from different stylistic backgrounds. Although Riley and Tippett have done duo recordings and gigs in the past, neither has worked with AMM's John Tilbury, a Morton Feldman specialist and minimalist explorer. What they have in common is that all three of their careers stretch back to the sixties and all play prepared piano here in their own distinctive way, each utilising different objects to alter their piano innards. Although pianist Keith Tippett can be a maximalist at times, all three players are often restrained, listening intently, balancing textures just right and working their magic together. Often one will provide the central focus as the others carefully weave sprinkles of notes around him. This is an especially well recorded studio effort in which each of the three pianists can be heard in a different section of the stereo mix - left, right and centre, so we can tell who is who. There are some occasionally explosive moments, but for the most part, there is a sublime balance of densities, more cautious than extreme. This is an absolutely amazing recording and a must have! Extremely focused improvisation starts out on an active foot (but never cluttered) and soon settles into a lengthy program of often minimalist textural playing - at times you could even think that this is one pianist with a purposeful mind. So please dig in and enjoy!"