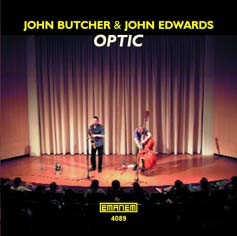 'Could life, after all, be counter-intuitive?' asks Lesley Hazleton in her book Driving to Detroit. 'I thought of how you handle a spin in the air, pushing the stick forward to keep the nose of the plane down when every instinct in you screams to pull it up.'

John Butcher throws even more reeds away unplayed than most saxophonists, because he needs them to do things most players don't. He's a past master at 'keeping the nose down' when you are sure he will do the opposite. Shake hands with John Edwards and you'll think you touched the bark of an oak tree - a physical sign of his devotion to the music. And whilst on the subject of devotion, J&J seem to inspire just that in the hearts and minds of the hundreds of players and thousands of listeners who know more about this music, this tradition, than any cultural manager.

Counter-intuition in music - doing what the other player doesn't expect. Or double-bluffing and doing exactly what they would expect. Following or not following or interrogating your 'screaming instinct'. Plus, sometimes the reed or string will do the opposite to what you intended, flipping over into the next realm if pushed too hard or not hard enough. Even though, as John B points out, 'Half a lifetime's been spent shut in tiny rooms trying to control these things for when the time comes to play a concert.'

In this music, a sort of alchemy can, like a Joseph Cornell box, turn a plastic jewel from Woolworth's into something infinitely precious. You can end up somewhere you have never been before and find your instrument doing something you never knew it could do. In the group improvisation tradition so assiduously developed in Britain, this sort of stuff can happen to everyone at once. As both player and listener I find that pretty exciting. No, scrub that, it's the most exciting thing in music full stop.

"A classic. Though this instrumentation might seem puny next to some of the adventures with electronics and the like, Edwards' intense physicality on the bass gives the music huge weight, and Butcher responds with his most forceful and detailed playing. Cocktail Bar is a single 27-minute piece, recorded in Brussels, while four pieces from the following year were set down in Barcelona. The Brussels set is headlong, while the more elliptical Barcelona pieces (especially the fascinating drone of Grottes 1) are a superb counterweight."

"One of the most exciting things about this duet recording featuring saxophonist John Butcher and string bassist John Edwards is the fact that at several points in the various performances, the only way you can tell which instrument is which is by remembering which one is in the right channel and which one is in the left - between Butcher's extreme timbral flexibility and Edwards' extended bowing techniques, there are moments when the otherworldly keening or doleful muttering combine to make sounds that could have come from just about any other instrument. The program is divided into two sections. The Brussels material is more raucous: at times the two players seem to be locked together, both playing their instruments with a single brain; at others, they seem to be almost ignoring each other. Edwards's occasional vocalisms punctuate the proceedings, and at one point it sounds as if someone's cell phone goes off close by, to humorous (and not entirely unmusical) effect. The mood of the Barcelona performances is more subdued. Panel 5, in particular, is largely characterised by sounds of gentle sibilant abrasion, and Grottes 1 is also rather quiet, with occasional noisy outbursts. On Plate XI, Butcher's use of tongue-slapping makes his saxophone sound amazingly like an electric guitar. Butcher and Edwards are masters of their craft and lovers of improvised music will find much to enjoy here."

"Now that it has been a going concern for a few years, it is plain that the duo of saxophonist John Butcher and bassist John Edwards is one of the better forums either have devised to explore their somewhat polar interests in minuscule detail and blunt physicality. OPTIC documents how the duo lurch, veer and careen from one vivid zone to another, and never settle for the pat gambit. Like most recordings featuring these two musicians, this is a largely riveting collection that keeps the listener thinking long after the music ends."

"From the opening passages of the 27-minute Cocktail Bar, it's apparent that Butcher and Edwards were feeling their oats at this Brussels concert. Compared to the almost serene quality of some recent Butcher recordings, the playing is almost violent, as he spits fire from his saxophone and dazzling light emits from Edwards' bow. Certainly this isn't to say it's like a Brötzmann blowout, only that this is very busy music relative to the standards these gentleman have elsewhere set. Low, guttural sounds follow the rapid-fire heat, and one is once again reminded at how uniquely talented Butcher is at exploring the sheerly metallic sound of his horn, subtly altering pitch and attack to expand and contract the sound amid the clouds and smoke Edwards generates. The latter four tracks are much more reserved, filled with a kind of brooding mystery generated by what's unsaid or the sentences left incomplete (as opposed to the rapid dialogue of Cocktail Bar). The musicians whisper and coo in statements that seem made in dense code on the almost subsonic Panel 5; here Butcher really digs into his expansive, hypnotic washes of multiphonic sound before being led along a different path by Edwards' introspective pizzicato. This disc is, in fact, one of the best places I know to study this excellent bassist up close. Listen to the beautiful buzzing on Grottes 1 that sublimely blends and alters tones, or to Plate XI, a symphony of thumps, bumps, and slaptongues. The most intense dialogue is heard on the closing Interior II: The duo's rapport is very nearly unconscious, as every spluttery nuance of saxophone seems to anticipate or shadow perfectly every subtle arco inflection."

"Cocktail Bar is stunning. There's a restless busyness, a tightly coiled tension as the duo machine-gun their stuttering phrases, micro-textures and even their spontaneous silences, all at a speed that springs from a significant instinctive rapport. They love to snap, to cut up, to cluck, peck and grind with a hearty physicality, always jumping sideways, often shunting without warning into a completely different (and telegraphically agreed) state. They explore an extremely broad vocabulary at speed-of-thought.

After this exhaustive gauntlet-throwing, what's Barcelona like? These numbers are much shorter, much quieter, swishing, delicate, breath-based, with string minutiae, then stabbing against a background of studied silences (Panel 5), or actually playing a morose tune with great togetherness (Grotte 1). Yes, Barcelona found them in a calmer, more introverted frame.

OPTIC is a prime example of how Butcher can still wrestle out unfamiliar sounds in a freely improvised setting."

"The set is brewing with energy and imagination at every turn, the duo deflecting any tendency to languish in the comfort of drawn patterns or breath-catching plateaus. Butcher's soprano exudes amazing control and confidence - unflappable, immovable. The saxophonist characteristically shuns expected impulses and flies through a self-written encyclopaedia of technique and emphatics. There are no detectable sketches in the numbers, only a 'get up and go' manner of music making. The duo is on target with each other, whether streaming together long lines of swirling improv or quick-firing chunks of short-duration sound. In Plate XI, Butcher mimics a guitar walking through overanxious arpeggios, trilling the mouthpiece as a Spaniard would 'R's. Each of Edward's bowed probings threatens to crack Butcher's tenor like a brittle walnut, with the saxophonist sidestepping and re-evaluating the proceedings. Where there are reflective moments, as in the bowed segment of Grottes 1, in listening to OPTIC, I was left with that euphoria that follows a solid workout. The result is part dance, part sparring bout, but altogether a fluid recording that works probably beyond even the expectations of Butcher and Edwards themselves."

"Tenor and soprano saxophonist Butcher is a purveyor of undiluted sound. The dynamic interfacing of Butcher's raw, sinewy improvisations with Edwards' Intricately constructed bass lines develops cohesively at an accelerated pace. The music gathers momentum and strength as each piece unfolds. While Butcher makes occasional use of staccato phrasing, his approach primarily reflects his penchant for long, connected, and rapidly flowing lines of free expression. He regularly introduces trilling and tonguing techniques to produce unusual yet fully musical sounds that establish a sense of normality to this highly unconventional way of communicating.

Edwards moves faultlessly in step with the unpredictable direction of Butcher. He adopts both the arco and pizzicato mode in making emphatic bass statements that fit precisely into the puzzle Butcher builds. High pitched need tones find a haven with comparable high bass shrieks, only to have the sequence modified as Edwards dives to the bottom of his instrument to present contrasting yet totally complementary scenarios. Butcher is an expressive artist; he seems able to communicate unerringly through his horns by stating atonal progressions that amazingly are received harmonically. While Butcher injects a certain quantity of brittleness into his speech, the totality of his output has calming characteristics. Edwards polishes the edges even further so that the product of this collectively improvised conversation is fully intelligible. They play - one listens - and understands."

"It will be extremely difficult finding somewhere else such a passionate, involving music at the same time so carefully detailed and, dare I say, elegant. Butcher's saxophones seem to contain strange ideas in their own body; John is always ready to build cathedrals upon them, he's able to raise a hell of multiphonics and shower us with impossible melodies but the very next minute he's putting a lump in your throat with some of the most lyrical chants since John Coltrane's masterpieces. A real giant of the instruments, continuing on his road to the top of the improvising community that I'm sure will recognise him as great in less than no time - and also the birds around my house seem to appreciate his playing (no kidding). On his side, Edwards is a perfect companion, completely at ease both with arco and plucking, not to mention alternative approaches - his beautiful sound never trying to rape, always caressing the beauty of the moment. John gives a good dressing down to most soloists, satisfying the listener's hunger for serious talent. In a word, hats off."

"There are many climatic moments with a lot of inspiration coming from these two great musicians. The acoustic here is really good and we have an intimate feeling on this recording. This is pure spontaneity done with a lot of taste and coherence."