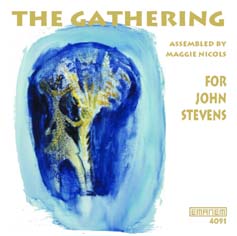 Currently out of stock

The Gathering was started in 1991 by Maggie Nicols and others, and it has met nearly every Monday evening since then, at the Betsy Trotwood pub in central London. The format has been for anyone to turn up and join in a free improvisation for about 90 minutes. This has resulted in a hard core of regulars, plus numerous people who have attended at various times. Some fine music and camaraderie have developed over the years.

When asked to perform in the 2002 FREEDOM OF THE CITY festival, Nicols decided to invite both present and past members of The Gathering. Since the memory of John Stevens was a theme going through the festival that year, Nicols also decided to incorporate some of Stevens' pieces into the performance. The festival performance lasted nearly an hour, starting and ending with extended improvisations. Unfortunately, the balance on my recording was unacceptable, so it was decided to go into the studio a couple of months later to recreate something similar.

The studio session started off with two extended free improvisations, which are heard at the start and end of this CD (the second one divided naturally into two halves). These are fairly typical of the Monday night sessions at the Betsy Trotwood, although the cast is larger than normal, and are examples of the mixture of voices and instruments that are a distinctive aspect of The Gathering.

'Over the years a trust and musical intimacy has grown which enables us to improvise in more depth and with less self censorship than might otherwise be the case. At the same time, our openness to new people prevents the stagnation that could take place if we become too insular. The only pre-arranged structures are the time and place, and even the time is flexible within the boundaries of nine and eleven p.m.'

The collage of three John Stevens pieces, arranged by Maggie Nicols, heard in the middle of this album, were then recorded. 'John Stevens' pieces challenge us to simplify what we do, leaving room for a collective complexity to evolve in which each individual plays an equal but subtly different part.' Click Piece involves short staccato sounds, while Sustained Piece features sounds held for as long as one can exhale. Mouse in the Desert allows one to vary the intensity but not the dynamics.

The first of these is preceded by a short free improvisation, while all three end with a free improvisation by a third of the group. All three performances also contain poetry spoken by its author (with one exception):
Click Piece: 'LAST OF THE GOONS GONE NOW' by Frank Charlton. (For Spike Milligan.)
Sustained Piece: 'A TRUMPET SHORT OF VICTORY' by Vicky Scrivener. Spoken by Maggie Nicols & Carmel Morrissey.
Mouse in the Desert: 'COSMIC SERPENT' by Shirley Hall.
The collage ends with 'FOR JOHN STEVENS' by Richard Leigh.

Maggie Nicols has been using these pieces in workshops ever since she worked with John Stevens in the late 1960s, while musicians such as Dave de Cobain, Richard Leigh & Paul Shearsmith performed these pieces with Stevens in the early to mid 1970s. 'Both the Gathering with its welcoming atmosphere and commitment to uncensored creative freedom, and John's community-loving springboards to spontaneity, open us to sources of inspiration which encourage free expression to flourish - two very different but deeply connected approaches to improvisation. In a dialectical dance Spontaneity and Structure become one another.'

"This debut album features an unusually large version of The Gathering, 25 members strong. Nine of them are singers, but the remaining instrumentalists also use their voices, since voice is a key feature of this group. It sets it apart from the LIO and most other groups, for that matter (maybe with the exception of the Libera Societa di Improvvisazione). The album begins and ends with half-hour long free improvisations where lush vocal textures unfold over a controlled tempest of reeds, trumpet, piano, guitar, electronics and percussion. Individual contributions are lost inside the group sound, powerful, organic and all-engulfing. Tucked between these two pieces (the latter is indexed in two parts) is a suite of pieces written by Spontaneous Music Orchestra's father John Stevens as workshop exercises for large groups such as this one. The Gathering goes through Click Piece and Sustained Piece its own way, adding free improv developments and poetry reading. FOR JOHN STEVENS is a beautiful album by itself and a resounding tribute to Stevens' legacy."

"Stevens was Nicols' mentor. Under his influence, she turned away from the unyielding harmonic grids of bebop to explore free improvisation. Because she gained her formative experiences on Stevens' mantra-like Click Piece and Sustained Piece, her takes of these often discussed but seldom heard works on this new CD are extremely valuable. The Gathering achieve a rich and complex interpretation of Stevens' instructions.

Feast aims to celebrate Stevens' life and legacy rather than mourn his premature passing. The Gathering meet this aspiration with opulent gestures and a multitude of activity. If at times the sounds fall frustratingly out of shape, that's hardly a negative criticism. Rather, an acknowledgement that Nicols demands creativity from musicians and listeners both. The last two tracks are tighter. The text-based Released is conversational, while the transcendent Beauty and the Beast packs an unexpectedly powerful punch."

"Over the years The Gathering has developed a subtle language of improvisation as only a dedicated group who have worked together this long could. The resulting works are rich and diverse, as one might expect from the list of players and their long association. The improvisations Feast, Released, and Beauty and the Beast take the listener on extended journeys, now playful, now dark and brooding, droning, sardonic, bewitching (or downright bewitched!) quiet and then chaotic. One has a sense of European history unfolding around them, enveloping them with a shroud of sound, ancient and modern, but never predictable and rarely familiar. The Stevens pieces give focus to the release, particularly in the poetic readings, where the approaches are forceful and unusual, sending a shiver in their sharp attitude and strong renderings. The Gathering is music to hear to over and over to mine the many nuances, to hear the subtle interplay and the incredible musicianship of such a large group listening and interacting, and to experience the merging of many powerful and unique voices."

"Regularly assembled by Maggie Nicols, the Gathering is an improvising collective of musicians and vocalists expressing themselves according to a certain spirit, in various instances reminiscent of direct experiences with John Stevens, to whom the CD is dedicated. Talking about this music is at the same time easy and impossible; of course there's a strong vocal element - also because the players double themselves on voice, too. This very character often crosses the borders between mantric forms, sometimes reminding the most beautiful Cornelius Cardew's moments, and a pretty various 'free movement', where a few sketches could be used in advance to orientate the group effort. The instruments' single voices always become one - no one cares about being singled out. Some of the parts are memorable: try the beautiful Sustained piece - that one raises some serious goosebumps."

"Feast, Released, and Beauty and the Beast, are free improvisations, replicating a weekly tradition established in 1991 by Maggie Nicols. On Monday nights at a central London pub, Nicols hosts an open roster of musicians for a lengthy free improvisation, and if the results were playing in my own neighborhood, I'd get over my antipathy to bars but quick. The mixture of voices, horns, and strings often produces eerie passages, where the sound sources become almost indistinguishable from each other. With its shifting, meandering ebb and flow, Joseph Jarman's classic AS IF IT WERE THE SEASONS could provide a reference point (if its personnel were increased eight-fold), but the scale of these improvisations, particularly the gigantic Feast, point in so many directions that one's pleasure is increased with each hearing. The more assertive of the free pieces, Released, is highlighted by Stuart Fisher's burbling electronics, and Paul Shearsmith's pocket trumpet, while Beauty and the Beast uses laughter, screams, animal sounds, and bits of decontextualised conversation.

Three compositions by John Stevens Click Piece, Sustained Piece, and Mouse In The Desert - are arranged into a collage by Nicols, with spoken poetry additions. Click provides the most intimate moments on the disc, with Frank Charlton reading his Spike Milligan homage, 'LAST OF THE GOONS GONE NOW', over soft, staccato sounds. Sustained uses Vicky Scrivener's 'A TRUMPET SHORT OF VICTORY' (spoken by Nicols and Carmel Morrisey) against a dramatic layer of sustained sounds, with striking voice harmonies reminiscent of Gyorgy Ligeti. Shirley Hall reads her 'COSMIC SERPENT' during Mouse, whose rhythms, both musical and spoken, are the closest to conventional as the disc gets. Richard Leigh ends the collage with his 'FOR JOHN STEVENS', expressing his bereavement at Stevens' death as a soundless fury."

"Here we have a group of vocalists improvising with their voices while many instrumentalists use their voices and instruments to create amazing spontaneous passages through almost eighty minutes of recording. It is amazing to see so many improvisers interacting to create these six wonderful pieces. This is what I call really mind-opening music!!!"