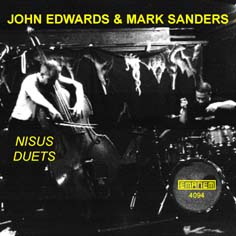 John Edwards & Mark Sanders first worked together with composer & sax player Steve Blake for the dance companies Cholmondeleys and Featherstonehaughs from 1990 to 1993. They have subsequently both appeared in trios led by Veryan Weston, Evan Parker, Tony Bevan and Elton Dean, as well as a quintet led by Alan Wilkinson. Other briefer trios have featured Peter Brötzmann and Frode Gjerstad. Separately, they have appeared in too many groups to begin to mention here, and there are even some groups in which neither of them play.

In the good old Jazz age, bass and drums would have been considered to be the 'rhythm section', or 'backing group' - not instruments to be featured in their own right until the later Jazz days. A record of just bass and drums would probably only have been issued on the Music Minus One label for aspiring musicians to play along with.

However, times have changed, and all instruments are potentially equal in the Improvisation age. There is generally no blatant rhythm, so that even though the instrumentation is often the same as in Jazz, the roles are usually different. Musicians like Edwards & Sanders do help create a forward momentum for the rest of the group, but they also listen and respond, and do not just stick to a particular function. In a group situation they are no longer the 'accompaniment' - they are equal members of the band. It should, therefore, be no surprise that they should make a duo CD, especially as they've worked together so much over the last decade.

These two musicians are so talented and imaginative, that this is far from being an updated accompaniment record - this is a complete music. So throw away your preconceptions of what bass & percussion are supposed to do, and enjoy this wonderful duo.

"NISUS DUETS pairs the ubiquitous Edwards/ Sanders team in a striking session of duets. Any doubts about the bass/drums pairing's ability to flat-out entertain the listener are dashed less than two minutes into the first track. After a declarative opening, in which Sanders plays a quick boom-to-bap ascending line, only to be met by the bassist's John Gilmore-like, arco yawp, the two lock into a skittering, chugging flow that grabs ones ears, and doesn't let go. The glacial tundra of Pouring shows the duo brandishing an amazing level of close interplay, while, on Painting Edwards' fiercely bowed opening statement gives way to a spacey thought-scape, where the two produce a wide array of tonal manipulation, sustaining the mood beautifully. In a year that has seen some prime recorded examples of the power of bass and drums alone or in combination, Edwards and Sanders stand tall in their ability to bring the traditional, spring-boarding rhythm section into the forefront of improvising genius. This disc is most highly recommended."

"Fabulous album. I've been listening to this pair for a few years now (I remember a stunning CD with Veryan Weston - EMANEM 4028) and was always amazed at their synergy. Can I use the expression 'team work' without giving the impression that they work as a rhythm section? 'cause they don't. This duet album was overdue and it's a pleasure to hear."

"Some might ask, why make a record of drum and bass duets? But when the participants are John Edwards and Mark Sanders, my questions is, why did they wait so long? The two Englishmen have worked together for over a dozen years, and their spectacular compatibility has enlivened countless records (I first encountered them on a record with Evan Parker). You notice that I say 'with'; this is not a rhythm section, although they can be marvelously supportive and they're certainly no slouches at establishing a pulse when the music calls for it. Both men are complete musicians, capable of extracting a tremendous variety of sounds from their instruments and placing them exactly where they ought to be. I could name a whole array of conventional and extended techniques at which they excel, but that'd be missing the point, for this is music that transcends style or technique. It's about movement, drama, timbre, texture and most of all the wordless communication necessary to put it all together and make it not sound like umpteen other free improv records."

"Noted for their consistently high quality improvisations, Edwards and Sanders are part of a small but intense and growing coterie of virtuosic performers who take their instruments to a new level of performance by discarding or at least altering historical notions of accepted technique and harmonic evolution. There is a pristine beauty to their playing here that, remarkably, never gets tiresome: remarkably, because it is hard to imagine an acoustic bass and drums creating such a diversity of sounds. Edwards plays second fiddle to no one, as he soars to creative heights matched by few. His strings sing sonorously, but they just as often strum wickedly, call piercingly, and complement percussively. Likewise, Sanders squeezes little sounds from his kit that question the tradition of jazz drumming. The ride is an exhausting though inspiring one, and anyone interested in exploring the limits of the bass and drums or the potential of these two 'instruments' to interact in new and creative ways should be pleased with these fascinating and often inspiring works of astonishing beauty."

"First ever duo effort from the extraordinary British contrabassist and drummer. This is a well recorded studio date which shows a wide variety of intricate sounds made from just an acoustic bass and drums/hand percussion. Beautifully balanced, with delicate hands-on-drums inventiveness and warm bowed bass fluctuations which never gets too dense or predictable. They do all sorts of subtle, magical things with hushed bass and small (bowed?) percussion sounds. On Panting they erupt with wonderful free-wheeling results, walking bass burning intensely one moment as the flurry of activity around the drums explodes with restrained nervous energy. It should come as no surprise that these two can connect with those inner spirits and provide passion, drama and dynamic tapestry from start to finish. Excellent!"

"NISUS DUETS matches the ubiquitous London bass player John Edwards with the rolling and top-popping talents of percussionist Mark Sanders. I find each cut to be quite moody, showing a different side of this instrumentation and this duo with each track mark. Panting is the 5 minute rocking thumping ripping groove you want somewhere in each day - consider it delivered courtesy of Edwards and Sanders.

The quick shift from pattering flicks and thwacks around 2:14 into Peering opens up a bent bass note dripping, dripping, regularly and quietly, like water from a faucet, wet and ripply amid light tom drum bouncing. Their interplay is especially dynamic and responsive throughout this track, putting the directness of their dialogue into relief against the more textured improvising throughout most of Pouring. Out of the slow pace of Peeling emerges long soft cymbal spreads and delicate yet determined finger-bassing, like teetering on the brink of having nothing to say to a close friend, and drawing closer because of it. The whole album makes a comfortable listen, whether concentrating on the details or putting it on amidst other household activities."

"Bass and drums traditionally comprise the backbone of the rhythm section. While these two players can hardly subscribe to such narrow job descriptions, they still hold strong ties to their instrument's conventional sonorities. Despite the music being freely improvised, there are often very infectious rhythms being perpetrated here. Sanders' drum kit isn't hospitable to a 4/4 time signature, but complex pulse-driven patterns regularly dance from his sticks. Edwards emulates the ethnicities of the entire string family from violin, through viola, to cello and of course bass. He shears with bow and burrows with fingers in equal measure, punishing his instrument with the sort of masochistic love that only the masters can mete out. His Emory board-like rubbing on Pointing is so controlled and mercurial that it's virtually possible to sense the rosin smouldering in the horsehair of his bow.

Both men bow, both men drum, their approaches sometimes overlapping in such a flurry that their individual contributions blur. Painting finds them smearing streaks of raw tonal colour in broad strokes, only to daub in the details with intricately dappled ornamentations. The pizzicato and brushed groove of Panting sounds surprisingly like it could be the work of William Parker and Hamid Drake. The delicate, mathematical, almost Gamelan, interplay of Peering uncovers another side, one that later turns ornery and intense in the closing minutes. Among the most exciting attributes of the program is that the players perform entirely acoustic without the interference of amplification or electronics. Just the two men and their instruments talking shop.

So Edwards and Sanders aren't your daddy's drums and bass. Isn't that all the more reason to drop an ear in on what they're doing?"

"It would be easy to define this music as 'gesture/texture'. Instead, Edwards and Sanders paint, construct, choose ways to play the very guts of their instruments that are absolutely new to ears; of course, prevailing timbral shades tend towards low, a rumble here, some tremor there... everything goes to achieve the best result: string plucking, grunting arco, a multi-dimensional drumming approach. But what actually must be observed and enjoyed in NISUS DUETS is the almost theatrical value of a simple instant decision, that note which is there because it has to be, without thinking too much about the reason, instead imagining a fitting choreography to this strange, introverted, untranslatable train of thought by John and Mark - two masters of their craft, if you ask me."

"As leading players of European improvised music, Sanders and Edwards are used to working in a non-hierarchical musical system, where the choice of instrumentation matters less than the process itself, and the sonic possibilities available. The two work together so often and in so many different ensembles that a duet recording comes as no surprise. Whenever the two play together in larger formations, a moment always seems to occur when other players drop out and they are left to take centre-stage. The NISUS DUETS stick to the abstract yet well mapped terrain of free improvisation. Close listening, rapid interaction and accumulated musical experiences all combine to shape unique but somehow familiar musical landscapes. The duets nicely cover the full range of current improv sounds, from new reductionism through to old-school bubble and squeak. Only during the very brief Panting do they sound anything remotely like a conventional rhythm section. Edwards and Sanders are two of the music's best, most in-demand and uncompromising improvisers on their respective instruments. You'd expect the very best that the genre can offer from such a blue-chip pairing, and this is largely what you get."

"We've counted nearly 90 discs since 1982 bearing Edwards's credit, yet remarkably this is the first on which he is identified as (co-)leader. The situation scarcely reflects his importance in British music; map the key connections of recent years and Edwards stands at the confluence of most of them. Here, with the like-minded and and equally ubiquitous Saunders pattering out an urgent opening accent, Edwards declares himself with a delightfully simain bellow. His arco work, again at the beginning of Painting, is resonant and remarkable, while the chilly harmonics of Pouring (all the titles are some such) create a bleak landscape that's far more fascinating than forbidding. Music to work at, to be sure, but the rewards are immense."