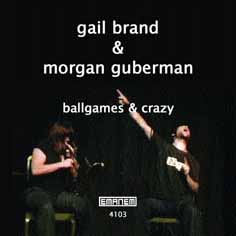 Gail Brand and Morgan Guberman met in the spring of 2002. Gail was playing a gig at The Jazz House in Berkeley, California. Morgan sidled up to her and suggested they play an improvisation, there and then. Gail caved in and they haven't looked back.

Morgan is a vocalist, bass player and composer. He has performed throughout the U.S. and Europe and is at large on the Bay Area improvised music scene. Morgan thrives in Oakland, California.

"This album is a beautiful surprise. Who could have guessed that the London-based trombonist and the Bay Area vocalist would end up recording together. Gail Brand, a young free improviser mostly known at this point for the quartet Lunge, and Morgan Guberman, a young improviser with a a double bass training, clearly share something special on this album. As a vocalist, Guberman is completely off-the-wall: an all-around performer, he shouts, screams, admonishes, buzzes and drones in a way that brings to mind both Phil Minton and the round-the-corner rambling crazy man. To put it simply, he is all over the place, and he needs someone strong enough to cope with him and convince him to leave some room to his partner. Brand is exactly that person: she masters the scope of extended techniques necessary to rival with Guberman¹s sonic arsenal, she can use her mutes to produce subtly (and occasionally less subtly) vocal-like sounds, and she obviously shares his sense of humour.

The trombone has always been the instrument of choice to imitate the human voice. It can wail, stutter, burp and moan in convincing ways. That¹s why the ten pieces presented on BALLGAMES & CRAZY are best described as heated conversations. Imagine the two of them talk in exotic languages, if that helps you get past the initial comical feel of the music - although Guberman occasionally blurts out an intelligible sequence of words, turning it into a leitmotiv, a musical figure of sorts. These conversations between two highly expressive voices are utterly fascinating, refreshingly entertaining and hold many promises to those who will choose to follow them in their next adventures."

"Gail Brand teams up with the vocalist Morgan Guberman, who yowls and growls half-formed words like a Warner Bros cartoon character speaking in tongues. Often. Brand's trombone and Guberman's voice, with their mutual vocabulary of pops, clicks and lip smacks, become indistinguishable. and brass and body are revealed as little more than airways, both struggling to communicate an innate sense of something. At other times, the joyful absurdity of the whole exercise overwhelms, and there is no option but grateful and inexplicable laughter."

"First of all, this duo's funny; the complete control of the trombone's features by Gail is totally absorbing, to the point I couldn't hold back smiles listening to her animated conversations with Morgan over a thousand matters. Music that's very well digestible even if acutely discursive, showing improvisation under deforming lenses with results that just surpass the 'regular' expected canons. Accepting filth and candour in their self-created lingo, Brand and Guberman wash any discrimination away with a cloudburst of fresh and lively 'natural' virtuosity; their clutch on your humour will be strong."

"The best players are great listeners and there is no better listening forum than a duo. Gail plays the trombone and Morgan is on voice. And what a voice it is. He gibbers, cajoles, yells, yelps, whispers and yaps. Gail is the listener. She accompanies Morgan's explorations, nudging him occasionally. Sporadically you can make out some words from Morgan and you start to follow in that direction and then he loses you and you are left with your own thoughts and Gail's beautiful musing. He also leaves you to fill in the gaps. There are variations, Morgan occasionally takes on the timbre of a red necked southerner and when he does Gail growls with the ferocity of a Tricky Sam. The whole is like a Kerouac wild dash.

This is a remarkable record and needs to be heard. Between them they explore so many moods. They can be funny, tender, sexy even. This is Finnegans Wake with music. It is a patchwork quilt of sounds. If you just hear one "free" CD this year, make it this one. It could change your view of the whole genre."

"Morgan Guberman (bassist with, among other groups, Scott Rosenberg's Skronktet West) sounds like Phil Minton and Shelley Hirsch's bastard love child sent away at birth to be raised by an alcoholic great uncle in Hicksville KY and forced three times a day to chug a fifth of Makers Mark and recite USA TODAY from cover to cover backwards. Recorded in Oakland CA, where British trombonist Gail Brand had escaped to in August 2002, BALLGAMES & CRAZY contains ten tracks of brain-bending trombone and vocals, certainly enough to push you right over the edge."

"This is an unusual but ultimately satisfying set of improvisations for trombone and human voice. British trombonist Gail Brand spars with Bay Area madman Morgan Guberman, who left his bass at home for this session in favour of mind-streaming wordplay.

The most obvious reference point for this kind of work is Phil Minton. Guberman does recall Minton at times, but also stirs in fistfuls of Kurt Schwitters, rural bluesmen, grumpy Jewish grandpas, pompous cabaret singers, and a liberal dash of Tom Wait. Brand is a consummate technician, employing plunger mutes, flutter-tonguing and multiphonics at the ideal moments. Aside from her work with Lunge she hasn't been well-documented, so this is a welcome addition.

Besides Guberman's humorous, ever-interesting rants, the album's hallmark is the rapt interaction between the two performers. These are musicians who really know how to listen in the midst of the rapid; it's amazing how many times Brand and Guberman land on exactly the same mark, particularly on the first track. When the vocalist grunts about tilt big fat man in the pool later on, the trombonist responds with guttural brass laughter. They exchange sharp staccatos on Dave and lounge-lizard swarm on What Did They Say? Similar point-on engagements happen throughout the disc. Absolutely engaging and hilarious front start to finish."

"Californian vocalist Morgan Guberman suggested that he and London based trombonist Gail Brand should perform as a duo. The idea was a shrewd one, for the outcome is outstandingly successful in the terms it establishes for itself.

Guberman utters ceaselessly like a man possessed, slipping in and out of words, in and out of character – confiding old timer, slurring hobo drunk, preacherly zealot, big baby, grudging introvert. His more abstract murmurings range from pinched prissiness to deeply rounded and fleshy sounds. Brand enters into a sympathetic and constructive dialogue – echoing, anticipating, nudging and cajoling. Her versatile response, with subtle and effective use of mute, confirms that she is an exceptionally attentive, resourceful improviser. Guberman may fall short of the dramatic vigour of Phil Minton, the doyen of male improvising vocalists, but there’s real purposefulness underlying his volubility."

"Guberman makes cranky, explosive noises that fit right in with Brand's array of trombone sounds that range from whispered wa-was to abrupt rude noises. On Ballgames they slow into an approximation of the Blues with Guberman singing in a gravelly, mush-mouthed voice while Brand channels Tommy Dorsey with buttery crooning. Big Man in the Pool is summed up by its title, a descriptive bit of grumbling and snoring. On Get in the Car Guberman breaks into bubbly nonsense singing while Brand smears around him, while in What Did They Say? he actually sings words while trying out his operatic voice over Brand's soaring horn sounds. Brand is an excellent player on her own, but combine her with Guberman's manic nonsense singing and you get an absurdist world of sound, free music leavened with a welcome blast of humour."