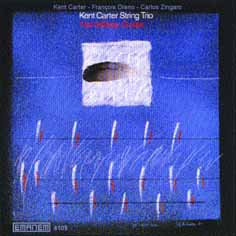 Those who have appreciated through the years the many talents of bassist Kent Carter (in the bands of Paul Bley, Carla Bley or Steve Lacy for instance), have secretly wished that one day he would lead his own band. Since Mister Carter has always been a very personal and inspired soloist, one would think that his conceptions ought to be extended to the size of an orchestra.

With the Kent Carter String Trio, this wish comes through, and our hopes are more than satisfied. The Willisau performance from August 1981 is enough to demonstrate that this trio ranks among the freshest and most exciting units the creative music scene offers today.

What strikes most with this trio is that it offers a music that seems to belong to no school, even if one can feel it is rooted in the double tradition of African-American music and occidental classical music. Yet the listener never has the impression of patchwork or blending. Between the written parts and the improvisations, and thanks to the contrasted personalities of the three protagonists of the group, Kent Carter fully succeeds in proposing a unique sound designing very pure landscapes that slowly takes the listener into a different universe. Its softness - which covers same very strong inner dynamics - and its subtle structures offer a definitely new direction in the music of today.

The string trio was founded in 1979 after playing with many different string combinations. My search for a flexible performance group with a rich string sound and compatible overtone series centered on this trio.

The compositions are written with integrated improvising sections which expose the rich talents of Carlos Zingaro and François Dreno, and exploit the possibilities of the three instruments in ensemble.

"The reissue of THE WILLISAU SUITES scores another high-water mark for the always overachieving Emanem label. Carter's elegant and lively compositions for François Dreno on viola, Carlos Zingaro on violin and his own double bass create an immediately full, chamber-ish feel. Dance Suite, the album's first track, opens instantly into a lovely melody made rich with sharply synchronized bowing. The composition's poignancy inspires increasing awe, like walking into a grand, modern cathedral for the first time. Carter uses extended techniques like grainy scraping and below-the-bridge harmonics, but only occasionally, and always within the ambiance of a traditional string ensemble's repertoire. The faster pace of Dance Music Image Suite balances roughneck bow-slapped strings with tight streaks from Zingaro's hovering violin. For all the people, like myself, who can't get enough of Carter's 1996 duets with Albrecht Maurer on violin (THE JUILLAGUET COLLECTION), the compositions here thankfully share the same lineage of focus, harmony and virtuosity. Extending the same approach to a trio format enhances how lush and seductive Carter's musical material is. Maurer also appears with Carter and Emmanuelle Roch on viola for two bonus tracks recorded in 1997, giving the listener a more recent sense of Carter's string trio compositions, which are decidedly more improvisational and multi-textured."

"Bassist Kent Carter is perhaps best known for his work with Steve Lacy. Working now more and more in a chamber context, this record gives full rein to a music shaped as much by composition as by improvisation. If it has at times an episodic quality that reveals a huge breadth of influences from Bach to Bartok - the lovely opening Dance Suite and Hungarian Fantasy - and from Beethoven to Shostakovich - Dialogue For Violin And Viola - this is part of its charm. The two 1997 tracks seem more wilfully abstract and appear here as an interesting afterthought. But it's the richness and vitality of pieces such as the long yearning title track and the contrast between Hungarian Fantasy's gypsy-folk flourishes and its occasionally dark dissonances that emphasise Carter's heartfelt commitment to and understanding of the form. For the rest, Carla Bley's Violin is a miniature built on a series of contrasting musical ideas, while the angular shapes of Dance Music Image Suite contrast with the quiet mania of Our Waltz. What a fine reissue!"

"Carter's writing for strings is full of finesse and abundantly pollinated by cross-cultural listenings. Most of this music's character is centred around infrequent tonalities and profound dialectics among the participants; thematic sketches are not used as a mere starting point, instead becoming a relevant part of the following developments. Invalidating the norm according to which string ensembles are one of the hardest tests for the average public, Carter repays our attention with imaginative fluttering pictures of delicate animations and also - if the circumstance requires it - with an inappeasable quest for wheezy ciphers of dissonant hobnobbing. A ballad, closing the record, perfectly summarizes the enormous talent of this riveting artist."

"Seven of the nine pieces on this fine Emanem release are 1984 recordings originally issued in 1988 on the ITM label. The other two are first-time issuances of 1997 recordings by the new group. Those familiar only with Carter's work with Steve Lacy or Paul Bley may be a bit surprised at the music on this recording; on the other hand, those knowing only Carter's work with John Stevens, may also do a double-take. THE WILLISAU SUITES don't sound much like either.

The batch of seven cuts from 1984 sound more like Ives, Schönberg, Shostakovich, Lutoslawski, and Bartok (particularly Hungarian Fantasy, whose opening seems almost like an homage) than either Lacy or SME. The two short pieces from 1997 remain in this tradition, though, perhaps because of the improvisatory style of the newcomers, I think I detect a bit more Schnittke. For example, while there are still some ostinati and regular rhythmic turns in the closing Ballad, where these occur, the form seems more sophisticatedly 'meta', and the emotional content seems more straightforward and undisguised than in the earlier works. That the lovely pizzicato bass line in this piece could be from an innocent Debussy chamber piece doesn't prevent the other musicians from gently mocking it. It's very sweet. The other 1997 piece, Broken Clusters, contains more evidence of extended techniques than is exhibited on the earlier works.

Six of the pieces on the disc are by Carter, with two of the others being joint duo improvs. The improv by Zingaro and Dreno, Dialogue for Violin and Viola, opens in the manner of one of the Prokofiev quartets, but gets chirpier and more random than even a very occasional Stalinist could be expected to countenance. The other collective improvisation, Our Waltz (by Zingaro and Carter), is, perhaps, the weakest link in a very strong chain, with the occasional waltz elements not terribly well integrated into the seemingly haphazard remainder of the work. In the Carter-composed works, the improvised elements are wonderfully woven into composed or partially composed environments, and the trio's improvisatory work is very facile. As indicated above, Carter's compositions show a number of influences, but he's not derivative. The writing seems to me inspired, original, and expert. The remaining work, by Carla Bley, is more declamatory and less contrapuntal than Carter's but, like Ballad, is quite melancholy: It fits in with the rest of the album quite beautifully.

For the most part, both the playing and recording are so lush and accurate that you might think this music had been produced by the Julliard Quartet. Those wishing there were more chamber music for strings in the Shostakovich-Schnittke tradition (and those believing that no elements of such works could ever be made up on the spot) should certainly give this excellent disc a try."

"To hear bassist Kent Carter on this '84 recording (augmented with two '97 tracks) is to hear the bassist in an entirely different context than anything his work with Steve Lacy and Paul Bley would belie. Always an artist with a penchant for strengthening an ensemble and its collective voice, Carter has comprised his ostensibly 'solo' work of exercises and experiments documenting his search for a unified string conception in a group context. The use of overdubbed parts on everything from Ligeti-esque soundmasses to Eastern European folk explorations on his '74 Emanem recording, BEAUVAIS CATHEDRAL, point directly to Carter as something more than a sideman. One of the most noticeable things about this string configuration is the replacement of the usual cello with the bass. The bottom end is thus more deeply felt, the range of the trio's voice thereby increased, and a definite orchestral weight has been added.

Thus, Carter's introductory Dance Suite can (and does) sound like a Michael Nyman or Rachel Grimes piece for string orchestra. This first piece is a slippery beast, and heralds an aesthetic that is carried for the entirety of the record: passages of chugging minimalist anthems alternate with harmonic rest stops and wily solos from Zingaro and Dreno. It seems safe to assume that music like this is through-composed, but therein lies the difficulty: the trio slides so effortlessly between improvisation and composition that they have, in fact, become one and the same.

Bartok and Kodaly run free through the streets in the caterwauling Hungarian Fantasy, while Carla Bley's Violin is slowed down and elongated to the level of pastoral 'nachtmusik', worlds away from its usual piano trio environment. Carter's involvement with dance and dancers (his wife, Michala Marcus, is a renowned dancer/choreographer) is a thread running through the entirety of this recording; though two pieces are themselves titled 'dance pieces', from the overture of Dance Suite to the vicious freedom that opens Image Suite, the feeling of motion, of leaps and pirouettes, of held poses as long harmonic tones, pervades every phrase in this trilogue of music.

String-derived chamber jazz ensembles like the Revolutionary Ensemble and the String Trio of New York are still decidedly jazz-oriented, but Carter and his cohorts are onto something different entirely. This outfit has carved out a niche for improvisation in the tradition of Eastern European string music, doors possibly thought of in late Bartok quartets and those of the post-war tradition, but not fully opened until recently. Never would one think they would have been opened so forcefully."

"The reissue of The Willisau Suites, with Zingaro, is doubly welcome for the inclusion of two tracks from a later group with Maurer and Roch. It's stirring, slightly mystical music."