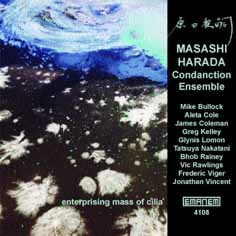 Music of body or music of memory.

The human body and the musical instrument contain musical memory from the collective continuum of the tradition or milieu in which they were born and conditioned. This memory takes many forms, some internal and some external (such as notational and oral literature). Musical instruments and objects have accumulated external memory in their physical bodies, and it remains present in their current shapes and usages.

The intrinsic vibrational quality of the material of musical objects also belongs to music of body. Musical instruments or objects all have specific physical limitations, such as the distance between strings or between strings and the resonator, the distance between the keys of piano, or that between two percussion instruments. These distances determine how the human body uses its own physical limitation in music.

Music of body doesn't have to be expressed in sounds or music: it can exist in total inaudibility. It's more an intrinsic physical quality - motion and vibration themselves. It's like a dance that exudes music.

Music of body is fundamental to the engagement between sounds and humans (as listeners/musicians). Each of the many musics of the world is related to the physical vernacular of its region or the dance and spatial concepts of its region.

Condanction emphasizes music of body rather than music of memory (although music of memory influences our choices of movement). Condaction is fundamentally a collective feedback mechanism in which my movements stimulate the musician's physical impulse and the sound, and the sound initiates my new movement. My intention is to let the materiality of the sound weave by itself and flow in its own direction. Though I act as kind of traffic controller, any one of the instrumentalists can initiate a new physical impulse within the collective flow. It can be collective and individualistic at the same time; the transformation of musical idea or flow can occur through a chaotic mechanism.

Focusing on music of body and fundamental engagement can lead to a synthesis of the subject/object relationship in music, erasing the borderline between musician and audience or creator and perceiver.

"The title is spot-on as a verbal equivalence for Harada's work. His ensembles do seem to have the purpose-in-chaos of organic processes, though an adjective like 'enterprising' also hints at the human dimension which is inescapable. This is utterly humane music, healing and energizing. The later line-up of the Condanction Ensemble puts more emphasis on electronics, and with the wheezing accordion adding a contrast to the strings, the feeling is of entering some primordial soup of sound that is quickened by electric sparks and beams. Very powerful indeed."

"It's a wild, stochastic sprawl of thrilling ugliness, a clot of instant Xenakis, seething with glissandi and clusters (Vincent's accordion is especially prominent). Small flashes of nmperignesque emptiness poke through from time to time - soprano saxophonist Rainey seems intent on re-exploring his microtonal Maneri roots - but Harada likes his musical canvases as dense and colourful as his ice paintings (examples of which appear in the CD booklet), and soon makes sure that Kelley and Rainey's identifiable splutters are peppered with screes of scratchy strings. A worthy addition to Emanem's large ensemble catalogue."

"In some instances, this set boasts a hodgepodge of extremes. Harada instils movement into this gala via an amalgamation of diametrically opposed angles fused with semblances of chaos, passion and ambient sound-shaping interludes. You'll hear interleaving strings coalescing with horns and asymmetrically constructed rhythms amid James Coleman's spooky Theremin permutations. In addition, this production offers an opportunity for the listener to delve into oddly concocted harmonic structures. For example, trumpeter Greg Kelly employs a raspy-toned, muted sound on Enterprising Mass Of Cilia, atop thunderous percussion manoeuvres and startling shifts in momentum.

This program speaks proverbial volumes about Harada's seemingly complex approach to composition and group-based interaction. On a lighter note, this outing moves forward with an air of excitement, akin to perhaps watching a classic, whodunit type detective yarn. Hence, the unpredictable nature of movement and unanticipated flow of events suggests a flustering balance marked by an air of intrigue. (Recommended…)"

"ENTERPRISING MASS OF CILIA is episodic music, not dissimilar from other conduction exercises-here given a slight twist to include dance, and renamed 'condanction'. As a whole, the music moves rather gracefully through a series of explorations of timbre, phrase, and rhythm, with a heavy emphasis on varieties of collective sustain. Among the sounds is a strong reliance upon strings (a violin, viola, two cellists, and a double bass) and electronic manipulation courtesy of theremin and the now ubiquitous 'electronics'. Oftentimes taking a decisive lead (if only due to sonic differences) is the work of Greg Kelley on trumpet and the consistently compelling Tatsuya Nakatani on percussion. Jonathon Vincent, on accordion, also makes his impact felt.

Procession of Echo is a quietly restrained piece, hinting toward white noise and threadbare strings, with Nakatani finessing the most out of the moment. Bhob Rainey, on soprano saxophone, adds breaths of air and the sound of fingerings to the affair. A Room is much thornier, with Kelley blowing away at the beginning, while a plucked cello vies for attention. Both quickly give out to a burning Rainey in mid-range sputter and a fairly straight eighth-note pounding from Nakatani, which ever so briefly emerges. It's a fine statement, and its brevity, at just over three minutes, makes it even more compelling. A Room manages to both make a claim and do so before wearing thin. Element of Resistance, the longest piece at over 13 minutes, fares nearly as well, with enough modulation going on to retain interest. Again the sound of breath sets up the piece, with a sustained accordion defining the ambiance. Everyone has a turn to play the surrounding silence, with a twitter here and a burble there. That eleven musicians all manage to contribute without the piece ever feeling claustrophobic is a testament to Harada's skills of 'condanction'. Indeed, the entire album is a striking listen, and easily commands continued attention."

"Are we really sure everything's already been said about conducted improvisation? After listening to the Condanction Ensemble I'm not looking for answers, because this music is so naturally good that one doesn't feel any urge to give it a definition. Devoid of every obnoxious routine, Harada's mature gathering encloses a large variety of timbral royalty, so that each and every moment carries a sense of significance, enhanced by an unsubdued randomisation of fluctuating phrasing and peaceable mutability. Handpicking notes is carefully alternated with a well perceivable bodily offsetting; each one of the involved musicians is like a torch-bearer against the obscurity of stagnation. Masashi Harada is the perfect shaman through which the pure water of free music warbles, only to be channelled and transformed into wall-breaking force."