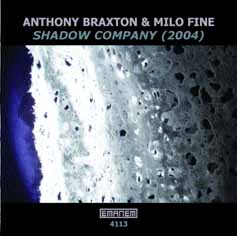 The music, improvised in real time, is presented as played, in its entirety. The division into 11 tracks is for listening convenience.

"Emanem has released several recordings made during Milo Fine's 2003 London stay, but this American set with Anthony Braxton tops them all. Both improvisers are in excellent shape and very generous, although Braxton sounds slightly reserved at first. If Fine the pianist cannot seem to succeed in shaking the legendary sax player out of his (exquisite) introspective mood, Fine the drummer hits the right nerves. The album consists of a single unedited 66-minute performance in front of an empty hall. The first quarter of the set sees Fine at the piano, and things start softly, Fine dancing gracefully around the sax player's inner dialogue, occasionally weaving a seductively jazzy discourse. Then he moves on to the clarinet and the duo truly locks in. By the time Fine sits down at the drum set, Braxton is in full motion and what follows is a fiery free jazz episode. After a few seconds of silence, Fine is back at the piano shifting between tender abstract melodies and hammered chords. A short second reeds duo features him exploring the resonating acoustics of the hall while Braxton plays a drone that grows once again to something fierce in the last couple of minutes. It would be too easy to suggest that these two improvisers, being both multi-instrumentalists, have a better understanding of each other, but on SHADOW COMPANY they do connect at a deep level early on. And that is all the magic it takes."

"Performed in real time on a variety of saxophones and clarinets plus drums and piano, SHADOW COMPANY is a beautiful representation of these two artists' corroborating playing as captured in 2004. Heated exchanges between wind instruments alternate moment of intense yet comfortless freedom and lyrical obedience to polyvalent schemes just waiting to be disintegrated by the burning breath of the musicians. A proper use of space and silence manages to capture the most authentic essence of an attentive reciprocal listening that's almost visible during a vast portion of the record. I'm left quite amazed by the brilliance of Fine's piano playing, which mixes digital monstrosities and accurate harmonic choices all in the space of fractions of seconds. While Braxton's impulsive opinionatedness is also his greatest gift, his immaculate virtuoso insights will never be enough appreciated, even if a large amount of new music's literacy owes something to him."

"The album makes a strong case for sets like this being presented as a whole; the changing dynamic between Fine and Braxton makes fascinating listening. The peak of the album comes in parts 8 and 9. On the former, Fine plays piano for a sustained period, giving a virtuoso display; in response, Braxton fires off an intense burst of alto sax, fierce and fiery with a tone as harsh and brutal as anyone's. Awesome. On the latter, Fine plays drums while Braxton gives a far more reflective, melancholy performance, his tone soothing and beguiling, in total contrast to the preceding violence."

"This is neither standard jazz nor avant experimentation, but a freely improvised conversation between two gifted players. For 66 minutes and change (broken up into 11 tracks), wielding four instruments each, the two carry off an exhaustive but not exhausting display of inspired music-making with virtually bottomless technique. This is for lovers of free improvisation at its best."

"Fine begins the set behind the piano and with both musicians in a relatively gentle mood. The pace picks up sharply when Fine moves to his clarinet, and by the time they're experimenting with what one almost inevitably thinks of as the `Interstellar Space' line-up; the music is cooking fiercely. Fine continues to alternate piano and drums and Braxton works his way through a range of saxophones. There are no obvious breaks in the flow of ideas, simply pauses as the players change their instruments, but these are like breath-stops in a thoroughly organic performance."