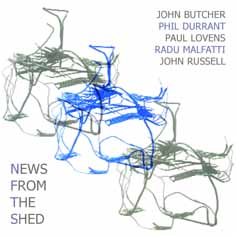 NEWS FROM THE SHED

I began playing with John Russell and Phil Durrant in 1984, meeting for weekly rehearsals. We performed as this trio up until 1998, but, early on, in 1986, we had the chance to invite Radu Malfatti and Paul Lovens to join us for an 8 date tour of England.

It was soon clear that this quintet, then called Quaqua (Russell's name for particular ad-hoc groupings), was not a trio-plus-guests. Malfatti's emerging concerns with composition and silence, the trio's interactive language and Lovens' vast experience and range didn't provide an obvious consensus for the music we would play, but, as the tour progressed, News from the Shed became a group.

Over 15 years on, when many improvisational methods have crystallised out of the earlier solutions (some, maybe, a bit too clearly), I think I can hear the push and pull of their tensions in aspects of the group's music. Perhaps that has something to do with why Mark Sinker described, in the WIRE, the original LP as 'Microscopic, Minimalist, dirty Abstract Expressionism'.

It was released on Acta in 1989, and I remember having to take the tape back for remastering, as the quiet work was lost in the noise of the vinyl test pressing. So it's a great pleasure to have this new, extended, CD release.

News from the Shed continued to play concerts until 1994.

"Long regarded as one of the finest examples of group free improvisation, the album's reputation has grown steadily. The quintet grew out of the existing trio of Butcher, Durrant and Russell. When Malfatti and Lovens joined them as guests for a short British tour, it was soon clear that this was not a trio-plus-guests but a group; News From The Shed continued playing gigs until 1994.

It is particularly interesting to reassess this music in the light of developments in improvised music in the years since its first release. We can clearly hear roots of the variant strains of improv variously known as eai (electro-acoustic improvisation), lowercase, New London Silence, onkyo, Berlin reductionism, etc. Although there has been much cross-fertilisation and blurring of boundaries between these strains, their common characteristics include use of electronics, silences, very low volumes and small gestures, plus a lack of focus on individual virtuosity. As Butcher, Durrant and Malfatti have all had significant roles in these new developments, it is no surprise to hear roots here. (Indeed, Emanem proprietor Martin Davidson has stressed roots stretching back to the '70s work of John Stevens, Trevor Watts and Paul Rutherford; those variant strains came about through evolution, not revolution.)

There is plenty here that will be familiar territory to aficionados of improv; the cut and thrust of sections of Kickshaws or Sticks and Stones employ the methodology whereby any musical utterance requires a rapid response, leading to that familiar feeling of animated chatter. In contrast, tracks such as Everything Stops For Tea and Reading The River are far more sparse, with every gesture seemingly well-considered and laden with significance. Meanwhile, Whisstrionics lies somewhere in between, busy but quietly so.

The four unissued tracks that have been added fit seamlessly with the original ten. All four are noticeably spare. Coracle is so low-key it could be a product of New London Silence; the players create an atmosphere of tension that draws listeners in and keeps them in a state of heightened expectation. The result is thrilling listening."

"The group sprung from the Butcher/Durrant/Russell improv trio, which itself was always a prickly proposition: sonic ticklings and pointillistic splutterings. Expanding the trio to include percussionist Paul Lovens and trombonist Radu Malfatti offered a wider range. Reissued on CD, the valuable quiet passages can be heard properly. The title track opens with a great fanfare like some ancient ritual. Suddenly, remarkably, everything stops. Out of the silence, Malfatti conjures a cheeky parrot voice, Butcher blows reed kisses, then Lovens' cymbals call everyone back. This is a group that both played and listened intensely, veering rather wildly from 'fox in a chicken coop' scrabblings to passages of great restraint and compositional structuring. On Reading the River, pindrop details are placed into silence. The swooshes and textures of Mean Time seem to aspire to the condition of electronic music. It's ambitious stuff, but as Butcher points out in a sleeve note, big questions were starting to be asked about the direction of this music, and it's likely we can hear the participants questioning procedures that by 1989 felt cosy and overly familiar."

"Much of the pleasure here is in hearing music that's on the verge of something else, halfway between olde-style improv and the more minimalist forms in the offing, but ultimately it's very much a musical world of its own. There's a watchmaker precision to the improvisations - tracks are short, often further subdivided like miniature suites, and there's not a wasted note to be found - yet there's no cautious, slow-motion playing or austerity: the results are, however small in scale, quite busy and vivacious. Each sound is as concrete as a pen-scratching on paper, and has its own force and direction, independently of the individual musician: indeed it's virtually a rule here that if a given musical gesture is started by one musician, it's finished by another. John Butcher's sax multiphonics flit briskly between sonic outcroppings, only rarely dropping into one of his trademark in-depth explorations of a single split tone; Durrant's subtly FXed violin rubs up against Russell's acoustic-guitar needlings; and there's an unusual low-key but anarchic sense of humour at times, most noticeable in Malfatti's witty and garrulous trombone, and in the way Lovens' discreet pointillism yields to the odd percussive spasm. Music of this delicacy was never ideally served by LP, and in this edition, with four excellent bonus tracks to boot, it's like encountering it anew, with even the tiny creaks and clicks at the end of Everything Stops for Tea now clearly audible."

"A most welcome reissue gives us the chance to enjoy five great improvisers caught in a transitional moment of their respective styles. Those of you who are used to Malfatti's silences and Butcher's explorations of natural - or less natural - resonances will find them both in more 'conversational' dressing; not that this diminishes in any way the level of their playing, already stratospheric at that time. Durrant's violin is a 'now-you-see-it, now-you-don't' presence between peculiar electronic spurts, while the clattering expressionism of Lovens, who often takes a predominant role in the overall dynamic context, is also an extremely noticeable colour throughout the whole set. Maybe the most atypical sounds come from Russell: his trademark spurious rasgueados-cum-supercharged harmonics are often put aside in favour of point-blank hits and invisible luminescences acting as a link to the most prominent voices of the ensemble, whose balanced attitude between restraint and chatter is truly something to be heard."