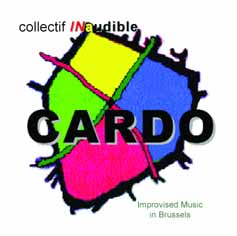 On a winter evening almost 25 years ago, my long-time friend Guy Strale came to my then new home, to sell me a new vinyl album with a explosive handmade cover sleeve: INAUDIBLE / IMPROVISED MUSIC (Inaudible 001). These recordings were the result of five years of working and playing with different improvisers. This disc focused on the openness of a music improvisation workshop that Strale and artist Philippe Legris founded in the Palais des Beaux-Arts in Brussels in 1976. They wanted it to be open to everyone wishing to discover sounds, self-expression and collective improvisation without any rules and scores. This workshop was held together with a monthly concert featuring the who's who of the then burgeoning scene of improvised music. It has continued since then, and is still at the core process of all the music of CARDO.

When I came into the collective in 1984, Guy and I often played duos or were the central players in and out of the workshops - often trying new connections. People left and joined over the years up until the mid-nineties when a larger nucleus evolved to the current cast. We did also two big festivals in 1985 and 1986, and we began our series of larger concerts in 1999. Subsequently, we have increased our activities, concert performances, rehearsals and recordings, and the network of our relationships and acquaintances has thickened. The multiple experiences we had in welcoming visiting musicians and new acquaintances from very different backgrounds and musical lives (and ages) were influential on the collective process and the increasing quality of our musical output.

Our aim at making CARDO was to focus more on the creative process of the Collectif Inaudible rather than on specific and individual aesthetics. Various groups exist inside Inaudible, involving members and outsiders. We share a common belief in improvisation as a way to create music. Two or three members worked on the selection of these tracks, taken from a large amount of material, based on several criteria: good recording technique; challenging for listeners; representative of both the spirit of the collective and the individuals involved. We excluded most recordings with guests and visiting musicians, wanting to concentrate on the collective itself. We also rejected some longer recordings because cutting and editing them was musical nonsense.

Most of the people involved have played and performed together in various combinations and in our BRuocsela Orchestra Libera (BROL) which gathers everybody. You will find complete performances and excerpts, concert and studio recordings, working and ad-hoc groups, some first meetings, larger groups and duos. The string quartet of Sur le Fil is heard at its first performance - it has continued as the Inaudible String Band. The ensemble with Jim Denley, Abi Rota, Pat Riské etc worked only once in the studio. The duos of Léon Laffut & Jean Demey and of banjo & voice were suggested by the concert curator. Others have rehearsed regularly, among them the trio featuring the longstanding duo Jan Huib Nas and Adelheid Sieuw plus Guy Strale. The tandem of Guy Strale and Jiji Duerinckx, our only sax player and the vocal duo of Dévoyés rehearsed for many months.

If most of the musicians involved are what you call trained musicians and/or improvisers, we welcome all newcomers to improvisation whether trained musicians or ones wishing to explore self-expression through sounds. Three tracks were recorded on the occasion of the first improvising performances of three of the players. I would add that all three of them have a solid experience and an artistic achievement as a moviemaker (Mara Pigeon), in chanson française (Nicole Legros) or electro-acoustic composition (Roald Baudoux).

As a consequence of selecting the recordings with the above constraints, some members are not on CARDO. But if we had completed a CD of our best recorded experiences with visiting musicians, tubist Jean Coulon would have been on some tracks.

This (sort of) music is made primarily through the process of people working and collaborating together. Should collective improvisation be a template for ideal social life? Perhaps, but trying to speak and relate to each other, they are learning consciously or not from anyone involved on different levels concerning techniques, creativity, personal control or self liberation. Listening closely, they discover their own capacity to decide when and what to play in conjunction with others and the group's sound. They try to keep the Cardo, the best 'road' at the heart of the created instantaneously music. They find their voice, their place and their way through one moment of real life en un temps vécu. We hope this album will help to put Brussels on the map of improvised music.

"The rich variety and high standard (the selectors did a fine job) make for a very satisfying listen. The musical territory here is familiar, employing tried and trusted improv methods; anyone familiar with, say, London improv will be in for few surprises. If anything, there is a greater emphasis on vocals (five of the twelve pieces feature voice); Dévoyés is a highly entertaining voices-only duo between Mara Pigeon and Jean-Michel Van Schouwburg, in which the pair indulge in a range of chatters, calls and warbles reminiscent of animal mating calls.

The longest piece, Sur Le Fil, features a quartet of acoustic guitar, cello and two double basses. Jan Huib Nas shows himself to be an innovative and distinctive guitarist; the cello and basses complement each other well, and the climactic bass duet is particularly memorable. Aigue-Marine, a quartet piece by baritone sax, piano, percussion and synthesiser, is a particular pleasure, a slow-paced but highly disciplined piece centred around Pat Riské's percussion; the other instruments make minute but significant sounds that contribute to an engrossing soundscape.

In truth, there are too many highlights here to detail them all. Every track is worthy of comment. Taken as a whole, CARDO is an enlightening, entertaining and enjoyable album. Let's hope there are further volumes on the way. Meanwhile, there is plenty to savour here."

"These twelve, trio and quartet-based workouts highlight the artistry of Belgian improvisers who recorded these tracks from 2001 thru 2005. The music sounds fresh and divergent, rooted in acoustic or electro-acoustic formats, oft shaded with an organic vibe. During these improvisations, you will hear harrowing, vocalise atop circuitous strings and oddly-balanced overtones. And a good portion of these expositions are topped off with moments of wit and whimsy. In essence, no two pieces sound alike, therefore it’s a divergent exposition of how musicians expand and contract various motifs with highly intuitive collaborative skills.

Amid the strings performers' odd-tunings coupled with the hornists’ unlikely twists and turns, the element of surprise looms rather mightily throughout. On Sur Le Fil, cellist Jose Bedeur’s buzzing lines generate an ominous undertow to complement his musical partners’ gruff voicings, where a sense of the macabre comes to fruition. In other spots, the respective musicians pursue sullen tone poems complete with counterbalancing modes of attack and verbose intercommunication. In sum, this newly issued product intimates yet another highly potent subset of the ultra-progressive, European improv scene."