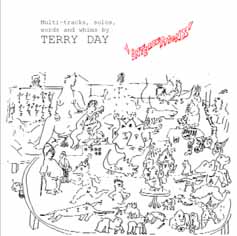 A sampler of multi-tracks, solos, words and whims.
A dip into backyard alleys - at a tempo.

Toying with the idea of multi-tracking during the 1970s, 1978 arrived. The initial aim was to use a 24-track system plus technical assistance (optimism). My thanks to the Arts Council of Great Britain for providing finances to record and to Steim Studio who provided a 4-track and further finances. Also thanks to Nico Bes who taught me to 'do it myself' and press buttons. 'With a hiss, a click, and a drop in; 'clodhoppers and exquisites'; the birth pangs begin' - and the goat tends to eat everything with equal pleasure and taste.

Terry Day was a founder member of the People Band and its pre-cursers in the 1960s. He subsequently worked with several leading improvisers such as Maarten Altena, Derek Bailey, Fred van Hove, Maggie Nicols, John Russell and John Stevens. He was a member of numerous groups including the Four Pullovers, Alterations, the Promenaders, Company, Kahondo Style and the Loverly Band. His activities have been curtailed since the late 1980s due to ill health. Before that he was a compelling force on a wide variety of instruments, as can be heard on this collection.

"What I find very moving about INTERRUPTIONS is the fact that whatever instrument or sound device you’re playing, you find a beautiful, full sound within it and project that with great poise and feeling. This has always been one of my definitions of a good musician – as you know, there are lots of highly skilled musicians who produce forlorn sounds for all their dexterity, but for me, somehow it works far more completely with the body, the whole body, when sound is the key element of playing. There are also great melodies – tender and funny and melancholic - emerging at the strangest moments, along with such subtle rhythmic flow.

I'’m amazed that from solitude you managed to make overdubbed recordings sound so organic and of the moment, so full up in the room but so relaxed in their spaciousness. You also use reverb in exactly the way I like, which is to suddenly give an otherworldly feel to a sonic environment that feels very natural. These rooms seem to be full up with secret people, even though I know it’s just you. But then I remember a solo performance you did in Brussels, when Godfried-Willem Raes said he would never book you again because you were drunk (hah! Now there’s irony), and what he was missing was this place you are able to inhabit, like many personalities all at once, and thinking it was mere alcohol. It’s actually something very special and for that reason, among others, this music is so original. I’m very happy that these recordings have finally been released."

"A multi-instrumentalist wizard if ever one existed, Terry Day was one of the founders of People Band (check out their CD on this same label). These recordings, captured on tape between 1978 and 1981, reveal him as a spirited improviser able to get the maximum from every source, a true force of nature whose unprecedented fantasy pushed him well beyond the walls of 'musical logic', up to those altitudes where sounds exist only to be seized and re-transmitted by artists that are more 'aerials' than 'players'. Thanks to multitrack recording, Day created duos, trios and group settings playing against himself, sometimes in a total frenzy (Drums/Altos/Balloons and the exhilarating Toy ensemble), often in thoughtful pseudo-exotic wonders (Oriental theme, Theme continued). His solo flights on saxophones are astonishing, the mandolin and the piano pieces sound like Eugene Chadbourne with Tourette. There are also three funny 'punk' songs where Peter Cusack and Davey Payne conspire on guitar, drum machine and sax with Terry singing, while Crackle box & Altos is a deranged ritual whose soul wets the nose of La Monte Young. I can't stress enough the naive, enthusiastic purity and the absolute freedom from clichés of this great, great music. Grab a copy of INTERRUPTIONS - one of the all-time best by Emanem in my opinion - and tell your friend who's saving money to go to Berklee that he'll never be able to play like this anyway."

"Unsurprisingly, in terms of aesthetic, the music on INTERRUPTIONS recalls Day's other outfits of the time, notably Alterations, but here, with the exception of one brief appearance by Davey Payne and two by Alterations' Peter Cusack, he's all alone, creating his own orchestra by (decidedly primitive) multitracking. The number of instruments he gets his hands on is typically bewildering - in addition to your good old standard piano, cello, saxophone and electric organ, the list includes bird toy warblers, bamboo pipe, Chinese flute, African thumb piano, mandolin, poppers (?!), balloons, plastic trumpet, kazoo and a Michel Waisvisz crackle box - but if that isn't enough, fans of his raspy singing voice won't be disappointed. On Be A Good Boy he sings along to a farty oompah that's as deliciously dumb as his lyrics, and on It Ain't My Cup Of Tea there's more than a smattering of Johnny Rotten in the delivery and articulation. In terms of recording quality I think we can safely say that this one isn't going to end up with a Grand Prix de Disque from the Academie Charles Cros, but for sheer fun and raw creativity, it's hard to match. Let's hear it for Terry Day, the man that put the mental into instrumental."

"A restless collection, the 32 tracks of INTERRUPTIONS cut abruptly between moods and means of expression. A strident piano solo gives way to an ensemble that includes bamboo pipes, toy bird warblers and a plastic trumpet. A wildly scrawled bottleneck mandolin solo leads to the throb of a drum machine and Day's Dagenham twang intoning caustic observations, while guest Peter Cusack supplies punkily chugging acoustic guitar accompaniment. An inexplicable 20 second swell of electric organ is followed by a knotty trio of Day's acid alto, bustling cello and drums. Whether he's playing standard instruments or ping-pong balls, squeakers and balloons, there's a real sense that Day just has to get that musical energy out into the open. Too much of his musical life has gone undocumented.

INTERRUPTIONS is a delight. It illustrates Day's restlessness and playfulness. His multiinstrumentalism is a way of getting it all out. And even as it spills over you can sense the next wave welling up to await expression. This might involve a free jazz blast on piano or alto sax, squealing balloons or splinters of bottlenecked mandolin, Gothic organ chords, bamboo pipes pitched against ping-pong balls, or songs suffused with rebellious anger or wry amusement. Whatever it takes."

"Terry Day may be a relatively minor figure of the London free improvisation scene, compared to John Stevens, Derek Bailey or Evan Parker, but back in the '70s and '80s, he was one of its most entertaining and unpredictable musicians. INTERRUPTIONS culls (mostly) solo recordings made between 1978 and 1981 for an album that never materialized. Sound quality varies from very good to poor, and the instrumentation is spread all across the board. Some of these pieces consist of brutal free solos (Piano 1, Soprano 1 & 2) and Day-to-Day duos (One and Two Cellos, Alto & Cello), while a few other feature extensive multi-tracking to achieve a more composed - yet just as wacky - result, including the intriguing Theme series. 78 minutes of this aural treatment is a little overwhelming and irritating, but there is so little solo Day around that it would have been a shame to cut down the album to a more palatable one-hour duration. Terry Day never was your average free improviser, as his work with The People Band and Alterations can testify, and INTERRUPTIONS lives up to the man's persona. It is cluttery like a mad multi-instrumentalist's basement."

"Neither for the faint-hearted nor for the overly serious, Terry Day's work with the People Band and elsewhere has been better documented on paper than on record. It's high time his solo work gets its proper due, and this dizzying suite of thirty-two fragments, recorded between 1978 and 1981, does it in grand style. To call Day a multi-instrumentalist is to miss the point. True, piano, saxophone, bamboo pipes and drums are among his arsenal of sound objects, but he's just as likely to attack crackle-boxes, whackers, pluckers and balloons with equal vigour They bend to his powerful whimsy; many of the improvisations on offer here being so high energy as to be almost frightening. The tracks segue with sickening speed, almost jump-cut fashion, each fragment interrupting the previous one, sometimes to re-emerge later in another form, sometimes only to disappear. Straight Bamboo Pipe Duet flows quite naturally, for example, into Bamboo Solo, but Drums/Altos/Balloons occupies several different spaces entirely, and the listener is plunged unceremoniously into each. Most of the pieces involve multiple overdubs, some professionally recorded and much of it committed to cassette. The effect of so many Days can be overwhelming and stunningly beautiful. Who else could make a crackle-box and a bamboo pipe resonate so beautifully with each other, sliding so tantalisingly close to unison and then away again? It is one of the few moments of respite on the sonically and spatially crammed disc, along with the series of Oriental Theme pieces, wistfully atmospheric explorations of percussion and Chinese flute. The disc coheres so convincingly that it could have been recorded within a few days, even the few songs containing wise-ass punk vocals and accompanied by the likes of Davy Payne and Peter Cusack fit into the projects aesthetic."

"A delightful imp of the perverse, Day plays saxophones, flutes, cello, pipes, percussion, and a Waisvisz crackle box on the early set of improvisations gathered as Interruptions. Payne and Cusack only appear on two tracks, so the vast bulk of the material here is over-dubbed. What is striking is how rich the recordings sound, even when the sound quality is less than wonderful."