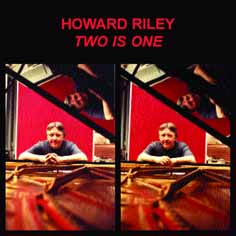 The two pianos on this CD are both played by me. I tried to keep the approach to this undertaking as simple as possible in the studio. I recorded the first piano as if it were a solo recording, then immediately added the second piano while reacting to the playback of the first. Musically everything is improvised and everything is a 'first take', although I had made a pre-recording decision to play short pieces and to be aware of the need for a variety of feelings and textures. The only exception to this approach is OSOIRETSIM, which is derived from a piece by one of my favourite pianists, Thelonious Monk. This is my first overdubbed piano recording for 25 years.

"Traditionally, I hate piano overdub discs! I never liked those Bill Evans records everyone was crazy about, and I did not expect to enjoy this one. I did though - I'm glad you put it out!"

"All the pieces except one, Osoiretsim, are spontaneously created, and Riley admirers will immediately recognise features of his unique style: the way he is able to draw on, and allow himself to be influenced by, his whole jazz background, from bebop to free playing; his ability to produce vigorous, cogent improvisations from small kernels (a rhythm, an idea, a motif); his pleasingly cluttered, muscular sound; his frequent resort to favourite effects, such as the ringing, descending flourishes that fleetingly bring church bells to mind. In addition, however, thanks to the format of this album, the extraordinary fecundity of his imagination in reaction to his own improvisations is also captured, and the result is one of his most intriguing albums, revealing fresh delights with each playing, and (in Osoiretsim, a delicious, occasionally downright funky visit to Misterioso full of rich, dark chords and plunging rhythms) providing yet more proof of Riley’s deep understanding of and affinity for the music of Thelonious Monk in addition to his peerless proficiency in the field of free improvisation."

"TWO IS ONE is a near-flawless gem. It finds Riley duetting with himself for the first time in over a quarter of a century. In the studio, Riley improvised nine shortish pieces and then immediately added a second piano part while reacting to the playback of the first. The resulting music - with the first part on the left channel and the second on the right - does not sound overdubbed; rather, it sounds like two players, totally tuned into each other's thoughts, improvising together spontaneously, without premeditation. The stimulus and response intertwine so well that without that channel separation, it would be almost impossible to determine which is which.

Riley draws on a vast reservoir of piano history here, so it would be possible to cite dozens of players whom the music calls to mind. The only one that Riley name-checks overtly is Monk on Osoiretsim - not improvised, but based on a Monk piece. Elsewhere, from the fractured boogie train rhythms of Doubling to the inside/outside duet of strings with keys on With Strings, to the restrained melodic beauty of After the Storm, there is a profusion of rich, varied music here, music to return to repeatedly and often."

"Howard Riley's single-minded choice has long been improv-based piano exploration way off the mainstream. Yet his roots are as much in Ellington, Monk and Paul Bley as they are in Cecil Taylor or contemporary-classical techniques. He plays two overdubbed pianos here, the second parts recorded as spontaneous one-take reactions to the first - the tunes are short and all improvised, save Osoiretsim, inspired by the Thelonious Monk composition the track's name reverses. Riley counters passages of walking swing with under-the-lid pluckings, spreads dark ripples of low sound under spacy minimalist treble tinklings, couples ballad-like melodies with hymnal chords obliquely reminiscent of Abdullah Ibrahim, and sometimes settles into long, orchestrally dense, minimally moving trills, as on Hear and Now. Osoiretsim expands on Misterioso's famous blues chords, and the reflective After the Storm is perhaps the best two-piano balance, embracing many of the musical and technical approaches of the whole set in the process. Occasionally the formula seems to corner Riley into adversarial debates in places where one piano might have been more eloquent left to itself, but it's a set full of sweeping invention."

"TWO IS ONE sees Riley playing a duo with himself, two overdubbed pianos, a four-handed virtual creature who is able to present your soul with a unique sense of gratitude, all deriving from the mixture of peculiar harmonic relations clashing in myriads of elastic digital games or, alternatively, caressing the ears with random romanticism combined with controlled tension. This artist's vision is based on a strangely functional chain of instinctive deviations and unexpected returns, his music a constant inpouring of bubbling energy which - just like the water of a mountain creek - breaks on the rocks of dissonance with a distinguishable, familiar noise only to settle in more placid moods every once in a while, confirming a rare transparent substantiality. Not only the ten tracks comprised here are the skeleton of another perfect album, they also demonstrate Howard Riley's subtle perspicacity in understanding in advance what's surmountable through sheer heart and what instead should be enjoyed as a phenomenon per se, technical instructions left aside, just being overwhelmed by unexplainable complex beauty."

"Howard Riley had experimented with the idea of overdubbed free improvisation in the 70s. With TWO IS ONE, he comes back to it in full force. The album consists of ten short pieces. For each one, Riley first recorded a 'self-sufficient' solo improvisation, then immediately recorded himself duetting with the playback. The pianos are panned left and right. The resulting impression is of a true piano duet, especially if you listen with headphones. The title piece illustrates how thin is the line between free improvisation, structured improvisation and composition: here, Riley is closely following himself, producing a very tight dialogue that ends in unison. Rather tender, Empathy provides another highlight. More chaotic and frantic is Doubling, showcasing the man's virtuosity. Osoiretsim provides a pause halfway through the set, with a tribute to Thelonious Monk. Riley always had a jazzy side - it also resurfaces in Unique - and the dual piano setting allows him to expand on his personal interpretation of the tune. In With Strings, the pianist deliberately takes different paths, playing the keys for one track and the strings on the other. Even when he is playing free, Riley always develops a certain level of melodicism (After the Storm is an interesting case of instant ballad), which always makes his solo albums pleasurable. This one is no exception."

"It's almost 40 years since pianist Howard Riley's first recording, a trio with bassist Barry Guy and drummer Jon Hiseman. Since then Riley has refined his own art with single-minded commitment and integrity, consolidating a readily identifiable style without losing the necessary spirit of quest and excitement. There's real rigour to his playing: decisive attack, vigorous phrasing, and a sure-footed sense of dynamics and structure. As a jazz musician he is constantly probing the fringes, transcending the idiomatic. As a free player he is generous in acknowledgment of jazz antecedents - in recent years, most notably Thelonious Monk. TWO IS ONE contains a Monk tribute - overt, yet by no means obvious.

TWO IS ONE finds Riley in duet with himself. He made a solo studio recording last July and immediately overdubbed his response to the playback. It's a procedure he used way back in 1975 for INTERTWINE. And once again it works extremely well. Riley's strong articulations lend themselves to accumulated denseness and weight that avoids sounding cluttered and untidy. At the same time, the element of premeditation in this instant revisiting never threatens to jeopardise the music's air of spontaneity.

The nuggets of Monk, present in phrasing and cadence, are embedded within a wide-ranging conception of where piano improvising can go, extending on With Strings to noisy textural tampering with the instrument's interior. But it's the rhythmic convolutions and shifts of gear, the skilful melodic development and transmutation, shapes swirling into existence and dissolving over and again, that carry the Riley stamp and make this a fine addition to an already invaluable body of recorded work."

"The music leans towards the pianist's jazz side, a set of ingeniously off-centre variations on barrelhouse piano, Monk, Cecil Taylor and the many shades of the blues that sometimes suggests a cutting-contest between James P. Johnson and Borah Bergman. Riley's ear for witty polytonal side-trips à la Paul Bley is strongly in evidence, but the central issue here is repetition - its flavours, moods and possibilities for expression and structure. For Riley repetition is the medium for a kind of cubist fracture or archeological dig; an idea is presented in multiple versions, left and right, often overlapping awkwardly though sometimes separated by long pauses (which are often more jolting than the notes). It's the kind of effect that would be hard to achieve in a live two-man format: Riley places a phrase just a little 'off', rhythmically and/or dynamically - particularly striking on the inverted Monk blues Osoiretsim - or closely mimics and fractures phrases from the other track in a way that would prompt a live interlocutor to square up the rhythms or get out of the way.

More than most albums, this is one where the music happens inside the listener's head as much as in the actual notes played, and that can be an uncomfortable and (even for veteran fans of "difficult" music) novel experience. It's also one of the freshest rethinkings of the common ground between free improv and the blues I've heard for a while - aside from the Monk track, sample the remarkable (and aptly named) Unique, an apocalyptic octopus-handed blues with enough tremolos and pianistic bravura to raise the ghost of Earl Hines."

"Riley's reaction to his own improvisations is fresh and without preconception. This allows him to use the second part in a contrapuntal or supportive role or even explore abstractly harmonic or melodic cues within the first piano part. It's demanding but highly rewarding listening that's made accessible by the inherent beauty of Riley's musical ideas and wonderful relationship with his instrument. These 10 pieces cover a huge span of jazz and other styles. Riley's command of a range of musical languages surely helps but his capacity to draw on bebop or even earlier forms, while remaining within a much more modern idiom is remarkable. But most of all on this record, I hear the blues. Time and again, even in the most complex pieces where the parallel might be Conlon Nancarrow rather than Monk, that feeling shines through. Riley is at the peak of his game."

"Riley's first experiment in over-dubbed piano duo for nearly 25 years, this is a richly confident recital created as close to real time as is possible in such circumstances by Riley reacting to the playback of the first improvisational 'take'. There are moments when he seems to embellish, noticeably later on in the recording (if these are indeed presented in recorded order), but for the most part he builds countermelodies and contentious responses to his first idea, often varying touch and attack so that many passages sound as if one über-piano is being played rather than a duet. There are echos of previous Riley improvisations, as might be expected given the richness of his discography, but only Osoiretsim (not difficult to decipher) betrays any external reference. Wonderful stuff, and certainly more than a technical exercise, though the technical demands have been very impressively handled by engineer Steve Lowe."