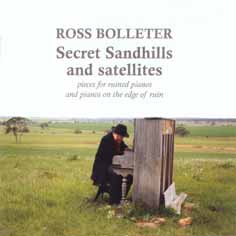 for ruined pianos and pianos on the edge of ruin

A piano is said to be Ruined (rather than Neglected or Devastated) when it has been abandoned to all weathers and has become a decaying box of unpredictable dongs, clicks and dedoomps, with not a single note (perhaps excepting D) sounding like one from an even-tempered upright piano. Sometimes you push down one key, and five or six others companionably go down with it, making for a surprise cluster and swathes of harmonics singing forever. The notes that don't work - clicks, doks and tonks - are at least as interesting as those that do.

Each Ruined Piano is utterly unique with respect to action and tuning (if we can talk of tuning at all). An F# one and a half octaves above middle C on a West Australian Ruined Piano in a semi-desert environment differs radically from the same note on a flooded piano in a studio four floors below pavement level in Prague.

A Ruined Piano has its frame and cabinet more or less intact, (even though the soundboard is cracked wide open, with the blue sky shining through) so that it can be played in the ordinary way. By contrast, a Devastated Piano is usually played in a crouched or lying position.

A piano judiciously left in the open and exposed to all weathers will ruin. All that fine nineteenth-century European craftmanship, all the damp and unrequited loves of Schumann, Brahms and Chopin dry out, degrading to a heap of rotten wood and rusting wire. The piano returns to aboriginality, goes back to the earth where the chirrup of its loose wires blown about by the desert Easterly is almost indistinguishable from the cicadas' long electric blurt.

However, it's not necessary (or desirable) to burn, drown or bury a piano in order to ruin it. A Ruined Piano should ideally be an object trouvé - and be played as found.

Timmy Payungka Tjapangati's painting Secret Sandhills was created in the oppressive, desolate and poverty-stricken conditions of the government settlement at Papunya, 250 miles west of Alice Springs, in Central Australia in 1972. In making this work, he used synthetic polymer powder paint on a piece of irregularly shaped masonite (particle board) picked up in the Papunya rubbish dump. When I saw the painting I was caught up in its power, and began to sketch impressions before I left the building. The musical composition does not take the painting as a visual score, but rather as a force field of luminous power - a matrix of the timeful and the timeless that informs and inspires the musical shapes and textures.

Regarding the six ruined pianos on which I improvised elements of Secret Sandhills, four are from Alice Springs to the east of Timmy Tjapangati's country, and two from the Murchison goldfields of Western Australia far to the south-west. I brought the field recordings into the studio and edited, assembled and shaped them with Anthony Cormican, who operated Protools. Anthony's giftedness in the digital realm, and his intuitive grasp of the dazzling resources of Protools has helped to make Secret Sandhills what it is.

"For the uninitiated - which includes most of us, I would guess - this album is at once intriguing, fascinating and educational. The sound of these ruined pianos is often very close to that of a prepared piano, with their occasional unpredictable thuds and clangs. In a sense, they are prepared pianos, but the preparation has been natural (by the elements, flora and fauna), not man-made. Bolleter certainly manages to extract the most from these ruined pianos, and he uses the results to produce music that is compelling and evocative. By far the longest and most substantial piece here is Secret Sandhills, at over 28 minutes. It is a constructed piece, the result of editing together Bolleter's playing on six different ruined pianos in six different locations, each with its own unique sound and idiosyncrasies. The end result is an entertaining and varied sound collage. Highly recommended - not as a novelty, but as a unique listening experience."

"The concept is beguiling, and the musical content stacks up. Secret Sandhills takes its name from a painting by Timmy Payungka Tjapangati, which he created in a desolate, poverty stricken government settlement in the early 70s. Behind the 28 minute title track is a thinly veiled fury at the treatment of Australia's Aboriginal population. Interpreting the painting as a 'force field of luminous power', Bolleter improvised the elements of the composition on ruined pianos he found in Alice Springs and the Murchison gold mines of Western Australia. Despite its fragmentary nature, the piece is eerie and powerful - the boomings suggesting cavernous depths, while a passage of agitated, echoes seems to invoke ancestral voices.

On some of the album's shorter tracks, Bolleter plays two pianos simultaneously. Save What You Can is elegiac, while on Old Man Piano, one instrument provides an out of tune melody and the other rhythmic bangs and thumps. Going to War without the French is like going to War without an Accordion has an improvised opening section, followed by a cod-classical passage and duets with accordion. There are shades of gamelan and Terry Riley's micro-tunings, as well as Cage's prepared piano as percussion orchestra, but Bolleter is a true original of Australian composition."

"For Bolleter, who has become a champion of this uncanny instrument, a ruined piano is a piano that has been abandoned to all weathers for a long time. Its cabinet and keyboard are still holding, but the strings are completely detuned and the mechanism acts unpredictably, unveiling a wide array of clicks, buzzes and boings - in other words, the piano has been prepared (in John Cage's sense) by Nature. The pianist does not prepare the piano to make it sound the way he wants to; instead, he explores and maps out its idiosyncrasies to compose music especially for it. The album is split into two halves. First up is the 28-minute Secret Sandhills, a careful, spacious piece assembled from field recordings of various ruined pianos. Here, Bolleter creates an otherworldly ambience in which silence plays an important part. The work was first conceived as an installation, so there is little development over this half hour of music, but the listener is sucked into the soundworld of the decrepit instruments and remains captivated by the dusty, yellowish images it conveys. The other ten pieces are much shorter and focus on specific settings and moods. Of particular interest are Dead Marine and Come Night. In Dead Marine, Bolleter develops a march-like motif that evokes an army of the dead, a sinister procession if there ever was. In Come Night he turns to the wobbly bass register of the piano, getting the best out of its unique though limited features. Throughout the album, we can hear rickety sustain pedals, hammers knocking on woods instead of strings, badly adjusted keys clicketing and unexplained squeaks and crackles. These are all marvelously integrated to Bolleter's compositions."

"While not epochal, Ross Bolleter's results are certainly compelling. The 28-minute title piece, inspired by an aboriginal painting of the same name, involves field recordings from six different pianos spliced, filtered and cobbled together in the studio with co-conspirator Anthony Cormican. Its length requires patience and there are stretches where the focus seems to stray, but overall it makes for a fascinating collage of motley sound elements. The disc's remaining ten tracks display other entropic wonders. There's the studious preparations of Going to War… where Bolleter employs objects that include a sheep's skull, ping pong balls, bottle tops and postcards to further handicap a piano's already tottering tonal palette in concert with a piano accordion. The instrument on Axis is so compromised that it sounds more like a zither than piano and Bolleter naturally turns his attentions to the still intact strings to create shimmering arcs of sound. Save What You Can features two pianos in tandem, their keys and action calcified such that it sounds like he's playing them beneath a thick foam baffle. And Then I Saw the Wind is similarly countenanced and Bolleter's delicate Satie-like improvisations on both benefit from the deadened environments. An endearing Barnum-esque element exists in Bolleter's project. Listening to his often-errant creations I was more than once reminded of the sideshow midway, where oddities are the norm and atypical forms regularly supplant the strictures of orthodoxy."

"If an ancient piano is like a grandpa narrating a whole life of experiences and lots of war stories, then a Ruined Piano is a dying being whose body is giving to Eternity the secrets of an apparent incongrousness, which only after the end is finally understood to be a gathering of essential principles of harmony and resonance. Ross Bolleter is an authority on this kind of instruments: he travels in search of such wrecked machines, improvising on the spot so that we can easily define these tracks as 'field recordings': birds, environmental presences and Bolleter's intense breathing are parts of the whole. The 28-minute title track - referring to a painting by Timmy Payungka Tjapangati, an artist from Papunya who was one of the founders of the Western Desert art movement - is a different kind of animal, as Anthony Cormican's Pro Tools-based studio treatment transforms the plonks and the thuds in impressive dark vortexes of deep reverberation amidst noiseless areas of quiet uneasiness, in what's maybe the most 'acousmatic' piece ever released on an Emanem disc. The remaining segments contain different seeds of memories which somehow would like to be framed by the decomposing woods, and that can sound like a toy forgotten in an old house (And then I saw the wind comes to mind) or recall disrupted chorales mutating into hollow metal clusters. It's a great collection, if one's receptive enough to understand the spirit of this researcher. For many people this could be a tough test, but those who pass will be thankful for their persistence."

"The centerpiece is Secret Sandhills, a 28 minute piece inspired by the late painter Timmy Payungka Tjapangati who painted on materials rescued from rubbish heaps. Not limited to a single improvisation, Secret Sandhills is assembled from field recordings of six ruined pianos found in areas that roughly defined Tjapangati's territory. The combinations and overlays demonstrate Bolleter's knack for musical architecture, combining to create music of complex vision and high seriousness, but his structural talents and spontaneity are apparent in the satellites as well, a collection of shorter pieces from different pianos. The extraordinary brightness of the highs of Jaunty Notes of Paddocks Bright contrast whimsically with the sudden decays of the muffled middle register. His consistent use of repetition, chance microtonal scales, and sudden timbral contrasts are the distinguishing marks of a composer who seems to have encountered his ideal instrument(s). The sound of tape suddenly running out at the end of Old Man Piano is an ideal chance conclusion."