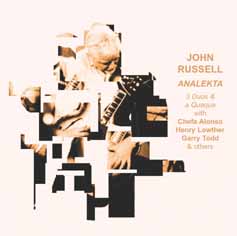 John Russell has been running the Mopomoso series of concerts since the mid-1980s, initially with the help of Chris Burn. The concerts take place on the third Sunday of every month at the Red Rose, which is between Finsbury Park and Holloway in the inner suburbs of north London. The usual format is to have three groups (commonly duos, trios or soloists) per concert, with the final group being a duo with Russell. The three duos on this compilation come from such occasions – there are several more that will hopefully be released in due course.

This is the second duo performance with Garry Todd to be published – a 1975 duo appeared on the long deleted Incus LP called TEATIME. Todd has not appeared in public very often over the years, but he has kept up his playing standard, as can be heard on this recent reunion.

Henry Lowther has been active, mainly as a jazz trumpeter, since around 1960, but has been involved in free projects from time to time. Over the last few years he has performed several duets with Russell – an apparently unlikely duo that works well together.

Chefa Alonso has been living in London for the last couple of years and making herself felt on both soprano saxophone and her home-made percussion kit. This was the first time that she and the guitarist performed a duet.

Every so often, Russell also puts together one-off larger groups under the name Quaqua. The last track on this CD is the nine-piece Quaqua he put together for the 2006 FREEDOM OF THE CITY festival. In choosing the musicians, he decided on an orchestration, and then used the musicians who were both available and potentially compatible. This theoretically unlikely group improvised some magnificent music together, showing that his vision was right.

"This release features three duos recorded at John Russell's monthly Mopomoso concerts, plus a large ensemble captured at the Freedom of the City festival in 2006. Each of the duos finds the guitarist in the company of a player not often recorded - saxophonist Garry Todd, trumpeter Henry Lowther and saxophonist/percussionist Chefa Alonso - but all deserving wider exposure.

Russell and Todd first played together in the 1970s, sharing a debut album on Incus records in 1975. Despite only appearing occasionally, Todd is in fine form, spinning out taut, pithy phrases that have more than a pinch of jazz in them. Throughout, Russell's guitar characteristically straddles the background and foreground. Predominantly playing chords - albeit surprising and inventive chords - he supports his playing partner but constantly commands the listener's attention. He typically coaxes a full, ringing sound from his guitar and propels the music along; the pace rarely flags with Russell about.

Henry Lowther is an occasional improviser, being far more commonly heard in mainstream jazz or classical ensembles, but one would never guess that from listening to him improvise. His pure tone and clean articulation are a delight, and draw an appropriate response from Russell, who demonstrates just what a sympathetic improviser he is. The combination is a pairing made in heaven.

Chefa Alonso alternates between percussion and soprano saxophone here; opening with a prolonged barrage of percussion accompanied by occasional restrained support from Russell. When she turns to saxophone, she produces some knotty playing full of unpredictable twists and turns; the piece is brought to a satisfying conclusion by some full-on soloing by both players.

The album closes with a nine-piece group that mixed London-based players with visitors from Belgium, Germany and Spain. With so many players, it would be easy for the music to become a cacophony or degenerate into a series of incidental exchanges. That neither happens here is largely due to Russell himself. His guitar is central to the proceedings - goading, guiding, leading, always keeping things focused. There is an impressively wide array of sounds and dynamics here, and Russell ensures that they combine into a coherent and satisfying piece of music."

"The prefix 'post' has always been problematic when used to parcel free improv players. Just as Evan Parker could be considered 'Post-Coltrane', so too is guitarist John Russell 'Post-Bailey'. But what do these pithy labels really tell us about either man other than that each follows chronologically from the iconic musician that preceded him. In a music that prides itself on resisting and subverting idiomatic impulses, the condition of 'post' would presumably be a given. Russell’s latest Enamem disc is as good a place as any to encounter the aural attributes that both align him with and separate him from Bailey’s long shadow.

The first two duo pieces pair Russell with very different horn players. Tenor saxophonist Garry Todd is an old associate and while he and Russell haven’t recorded since a shared Incus appearance in 1975, their rapport sounds intact on The Bite. Russell carves craggy chords and brittle punctuations and Todd traces knotted, fluttering passages that veer occasionally into melodic jazz territory. Todd gleans a rich tonal range from his instrument and Russell frequently comes across as a man possessed, but after over a quarter hour of close communication the somewhat arbitrary sounding ending is a bit of a letdown.

Trumpeter Henry Lowther is an even better foil, the piquancy of muted brass blending surprisingly well with Russell’s animated strums and peckings. Open bell works just as well as plugged orifice and Lowther’s measured theme-referent improvising once again receives bold relief positioning against the mutable sounding board of his partner’s needlepoint plectral patterns.

The duo with Chefa Alonso takes some time in coalescing, a somewhat nebulous dialogue between homemade percussion and guitar gaining greater lucidity when Alonso switches to trenchant dervish-style soprano, though the rubber duckie squeaks are an inspired touch.

The disc’s concluding ensemble piece convenes a diverse cadre of European improvisers in an amalgam of acoustic instruments, vocals and electronics. Russell anchors the action with his sharply strummed strings and what would seem an ungainly unit sustains surprising degree of structure and spatial integrity over the better part of a half hour. Not exactly my favored flavour of musical tea, this last piece, but both it and its companions show Russell firmly in a 'Post-Russell' bag that’s presumably right in line with his free improv aims."

"Russell's debt to the instrumental vocabulary of Derek Bailey is clear throughout, especially in his attraction to wide intervals, his resolutely segmented, percussive attack, and his systematic variation of timbre and means of production (open string, fretted, harmonic, behind-the-bridge pling); it's in subtler matters of pacing and mood that his individuality comes through. He tends to dwell pensively, almost circularly, on chords or motivic cells that Bailey would have brusquely disposed of, and has a very different approach to group playing, preferring to merge into the larger ensemble sound (whatever the size of the group), and play with rather than against or aslant his musical partners.

The Bite reunites the guitarist with the craggily eloquent tenor saxophonist Garry Todd, with whom he recorded TEATIME for Incus back in 1975, and the result is rather like a Parker/Bailey duo in the process of backwards-mutating into something like jazz again. Trumpeter Henry Lowther remains one of Britain's best jazz trumpeters, but as Blart shows, he's also adept at free playing, weaving Milesian rhetoric in and out of the rich sustains of Russell's chording and enticing the guitarist into passages suggesting modal jazz or droney folk-minimalism. Chamarileros, Russell's duet with the Spanish soprano saxophonist/percussionist Chefa Alonso, shows his ability to find the exact counterpart to any texture - disappearing whole into the pell-mell percussion textures while fielding snappy ripostes to the sax's polymorphous gabbling. So It Goes pulls together nine players for one of the large-group projects Russell likes to call Quaqua. As you'd expect from this veteran of the LIO and Chris Burn's Ensemble, it's tightly organized and texturally varied, and admirably free of directionless everyone-for-himself playing. ANALEKTA, incidentally, is a Greek term meaning 'a collection of the finest works'; evidence of Russell's self-deprecating sense of humour, for sure, but nonetheless a fitting title for this excellent CD."

"When one thinks about the recognisability of a 'style' in improvisational contexts, John Russell's guitar playing stands up there with Derek Bailey's. His cutting acoustic shards are immediately identifiable, either in solo performances or in different settings like the ones featured in this disc. The guitar/trumpet duo Blart finds Russell in spectacular form, as he manages to render appropriate even the most disarticulated fingerings, subjecting them to his unique treatment of glowing harmonics and behind-the-bridge scintillae. In particular, Lowther's warm tone seems to complement and, at times, exalt a no-nonsense economy of means symbolised by Russell's choice of rasgueados and plucks, which need no amplification or effects to produce a wealth of perjurious limpidness. Saxophones are also good partners for such atypical methods, and both Todd and Alonso are up to the task. Through his own creative phrasing, the former eases himself during his comrade's trips through the meanders of sensible dissonance and swipes to the obvious in The bite, while in Chamarileros the latter incarnates a little bit more that ideal of emancipation from the norm which free music sometimes loses its grip on, becoming somehow standardised. This is ably avoided in a track in which wind and string instruments sound more destructured than ever, both disharmonic in peculiarly enjoyable fashion, yet ending their excursion in better known territories. The Quaqua - So it goes - is more theatrical, richer in variations and colours, with vocalists Jean-Michel Van Schouwburg and Nicole Legros in good evidence during a collective performance ranging from the delicately chamberesque to the brutally primitive. Stephan Keune, Philipp Wachsmann, Ashley Wales, Steve Beresford, Ivor Kallin and Javier Carmona are the other participants - besides Russell - in this scattering of curiously different talents."

"The 20-minute So it Goes is a largely exuberant beast of many dynamic shades; particularly noteworthy is some fine electronic work from Steve Beresford and the surprisingly effective pianism of Ashley Wales. Of the duo performances comprising the rest of the disc, Chamarileros is perhaps the most engaging on first listen, Chefa Alonso proving herself riveting on both percussion and saxophone, while Russell's ear is attuned to every timbre. I suppose Derek Bailey is an unavoidable influence, but Russell's playing circumvents tradition with constant engagement, attention to detail never seeming forced or overly conscious. It is very nice to hear Henry Lowther in yet another setting, he and Russell exchanging melodic fragments with ease and intensity on the appropriately named Blart. Lowther's muted playing is a pleasure, and when he finally lets loose, Russell switches into chordal mode, as fine an accompanist as could be desired."

"A packed program of fine music."