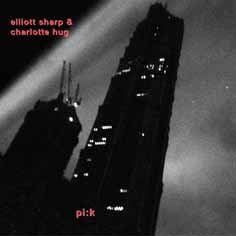 First meeting in Zurich in my SyndaKit orchestra - Charlotte a blonde explosion of sound and energy, bow and mane merging to form an intense granulation of sight and sound. Soon, our duos followed: no two the same; both electronic and acoustic, myriad strategies. Pixillated, angular, tangential in the best sense. Potentialities abound!

Artistic antipodeans possessed with insatiable curiosity and enormous joy in making music. Three weeks before the recordings in New York, Elliott became the father of twins, I was on a long tour, little sleep, lots of ristretto, intensive exchange of ideas. Our different artistic backgrounds amalgamate, inspiring fertile musical testing of limits. Both musicians contribute their very own respective musical-intellectual worlds. Wide, high-energy fields open out.

September 22 Duo with Charlotte Hug - Cave 12 – Genève. A return to this great basement space, packed to witness my meeting with Swiss violist Charlotte Hug. We do a hot and wide-ranging set. We have extremely different approaches which yields a continuous textural counterpoint, though when Charlotte uses her electronics, it's sometimes difficult to tell who is making which sound, making for an exhilarating set.

"This nice pair met for the first time in Sharp's SyndaKit Orchestra. They subsequently started playing duo concerts, an interaction made easier by the well-visible evidence of their creative brightness and the myriads of different facets that the respective expressions possess. pi:k presents fourteen tracks for guitar and viola, eight of them - completely acoustic - recorded at Sharp's studio in New York, while the remaining six were captured live at Geneve's Cave 12 and make good use of electronic treatments. It would be easy, once again, hiding behind E#'s description of the music as 'pixillated, angular, tangential' to escape with a fitting definition, but these visionaries have additional aces in the sleeves. When inexpert improvisers play without restrictions, it's not unlikely to end in the realm of nonsensical horticulture (the fruits of a suddenly liberated 'creativity' can taste really bad, you know). No such a problem in this case - one instantly realises that Sharp and Hug are the sole owners of their instant ideas, the guitarist swirling, popping and tapping all over the instrument's body to bring out contorted lines, chordal refractions and disobedient harmonics, gorgeously complemented by a viola that growls, sings, swears, hisses and lulls in the space of seconds. The electronics add a multi-dimensional variety of shapes and shades, generating soundscapes that travel across the borders of computer music to morph into ghostly undulations and reiterated complex dissonances. More than a contamination between two 'styles', the players stick to a jargon that leaves almost no room for thought, its volatile harmonic context acting as the optimal springboard for the attention to roam, thus becoming able to catch brilliance even in the most inaccessible crannies."

"Sharp and Hug do for their popular traditional instruments in the early 21st Century what those other duos did for them in the early 20th - create an up-to-date context for profound improvisation. To that end, while both use electronic to contrapuntally extend the sounds with pulsating wave forms and power-outage-like flanges on the final six tracks, the initial eight improvisations show that contemporary techniques can create almost the same effects acoustically. Thus Sharp's knife-style bottleneck licks and Hug's accelerated spiccato bowing may be antiphonal at times, but their in-the-moment connections create textures which frame his nails-scrapping rasgueado motion and her sul ponticello leaps and flying staccato in polyphonic accord. Whether the performances involve coagulated harmonies or raspy portamento runs the finale ends with purposeful reflection of one another's ideas. Able to subdivide timbres still further with electrical add-ons, sounds become more spacious and metallic on the last tracks. Yet despite thunderstorm-like drones and piercing string whistles, the result is never inchoate. Traditional techniques, ranging from dobro-like frailing from one side and impressionistic portamento stroking on the other, combine with the signal processed spluttering and grinding into satisfying distinctive inventions."

"Elliott Sharp and Charlotte Hug delivered two of the most memorable solo albums in recent years (the guitarist's THE VELOCITY OF HUE and the violist's NEULAND), so it's a distinct pleasure to listen to their duo outing (which finds them both using electronics too). Sharp is in an aggressive mood, attacking the steel strings with menace and vigor; it makes for a delightful contrast with Hug's microtonal work, with long gauzy double-stops and slow scrapings; elsewhere, his frantic neck-tapping contrasts with the keening voice of Hug's bow. The two whip up some serious momentum, mercury and froth throughout. The subtle ghosting audible on Stay in line sounds like there's an extra strings player, and the effects are thankfully not obviously 'electronic'; they supplement rather than distract."