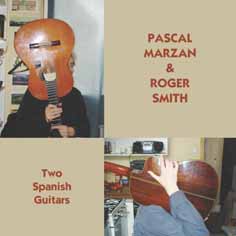 This music came about following an invitation to Roger Smith from Pascal Marzan to play at an all-guitar concert in Paris held in honour of the great improvising guitarist, Derek Bailey, following his tragic death in December 2005. Smith’s involvement in this event was significant, given his roots in the English improvised music scene of which Bailey was a key founder and mover from the late 1960s onwards and that he also studied with him. Pascal and Roger enjoyed playing together so much that they subsequently met on four occasions at Roger’s home in North London to record several hours of fine music, some of the best of which has been selected for this CD.

Pascal Marzan is a classically trained musician active in Paris, his home city, both as an improviser and organiser of improvised music events. Although less well-known in England, he has performed on a number of occasions with English improvisers recently, including Steve Beresford, Keith Rowe, John Russell and the London Improvisers Orchestra. Pascal’s solo performance at Freedom of the City 2007 was one of the highlights of the festival and was rapturously received by the audience at London’s Red Rose club. He has also recorded in a quartet with Philipp Wachsmann, Teppo Hauta-Aho and Roger Turner. His playing has been influenced by his interest in the folk music of Eastern Europe, Asia and Africa.

Roger Smith is best known as having been a key member for 18 years of the late John Stevens’ Spontaneous Music Ensemble. Other activities during the 1970s and ‘80s included performing with the Three & Four Pullovers (Emanem 4038) and in a duo with John Russell (undocumented, sadly). In recent years he has concentrated on solo and duo playing situations and recordings usually made in private domestic circumstances - most recently, for instance, with Adam Bohman (REALITY FANDANGO, Emanem 4135) - and only very occasional public performances. The latter includes a memorable meeting with Louis Moholo-Moholo at Freedom of the City 2004 (documented on Emanem 4215; also in a rare studio recording for Smith: THE BUTTERFLY AND THE BEE, Emanem, 4114).

Although two guitars is still a relatively unusual combination for free improvisation, Pascal and Roger in no way fall into the trap of the dreaded ‘ball of wool’ syndrome once identified as a hazard of this combination. This is due to the quite distinct musical personalities of Pascal and Roger, their mutual sensitivity to the potentialities of the nylon-stringed Spanish guitar and their use of timbre and space to create a dynamic filigree of sound and fragmented melody. Regarding influences, Bailey and John Cage (particularly the Cage of the Sonatas and Interludes for Prepared Piano) are obvious ones although, for me, the ghostly presences of Debussy and Dowland are also there at times. While some extraneous sounds from a North London street seep through intermittently, this needs to be accepted as an unavoidable part of the context in which this wonderful music was created.

"There's something fundamentally good (the word intended morally as well as aesthetically) about all of Roger Smith's recordings, beginning with their apparent naturalness. Usually made in the kitchen of his London home, often late at night, they're models of improvisatory intimacy, made with a minimum of distractions and no particular sense of audience, among the purest gifts the listener of improvised music might find. They're as close to process and as far from product as possible. It's music, too, that seems to spring from an almost unconscious muse, random in the manner of Derek Bailey but quieter, gentler and less pointedly flamboyant. I think you get as much of Smith as you get of any musician in a recording.

For all his qualities as a soloist (his concept of the guitar is particularly orchestral), Smith is a fine collaborator (the most durable of John Stevens' partners in the Spontaneous Music Ensemble) and it's evidenced in these duets with fellow guitarist Pascal Marzan. The two first played together at a Paris tribute to Bailey and a series of meetings in Smith's kitchen ensued. There's clearly a high degree of empathy here. The two share roots that stretch from the techniques of flamenco guitar to the early prepared piano music of John Cage. Approaches range from sounds that give the impression they just hatched on the spot - boinks and plunks and sudden shifts in volume, smeared sounds that reside near articulation, even the near-miss - to very fast arpeggios and sliding scalar patterns, a dense hive of perfectly even percussive sounds that blur into thoughts of waves and water. The result is a walk in the woods where wildflower and nettle, path and sudden bog vie for our attention and interest.

What's particularly pleasurable here is the way the two construct a universe, whether complementary or seemingly indifferent to one another's devices. Foreground and background are constantly shifting, but the two never do this in an obvious way. It's particularly open to the listener, who is virtually at the table, participating in the unfolding. The centrepiece of the disc is the extended three-part Holiday in my Head, a performance of sustained empathy that achieves a special vulnerability in part 3 as it courses sweetly around the idea of tonality."

"Everything about this release has a disarming sense of honesty about it. From the no-nonsense statement of its title to the separation of the two guitars that allows us to hear who is doing what, to the clean clarity of the recording, it is refreshingly straightforward. Never let it be said that musicians' use of electronics is less than honest, but it can make the music difficult to untangle. Not so here. What you see is what you get.

The resulting music displays a wide range of moods and techniques, although each piece has a consistency to it. Marzan and Smith seem (somehow) to know where they are going throughout, and do not get waylaid or distracted. Although obviously improvised, each piece has a beginning, middle and end, rather than feeling as if the players have been pulled hither and thither. At one extreme, both players simply delight in employing the ringing resonant tones of their nylon-strung guitars, as displayed on Holiday in my Head - part 1, allowing sufficient time and space for each of their notes to ring and decay. At the other extreme, they explore a range of extended techniques. Holiday in my Head - part 3 features prolonged sounds like brushing and popping. Ultimately, the differing techniques are integrated together successfully. The three part suite has a coherence that belies the contrasting sounds.

Pairings of acoustic guitars are comparatively rare, but all the more so when they are freely improvising. The current pairing came about when Smith was invited to Paris in 2006 to play at a concert in honour of Derek Bailey. Bailey himself would doubtless have appreciated this music, and recognised his own influence on it. He would also applaud the fact that these are home recordings (with occasional extraneous noise which detracts from the music not one jot) that radiate the pair's pleasure in playing together. The intimacy of this music makes one feel like an eavesdropper, privileged to be allowed to listen in and share that pleasure. "

"It's all about swapping ideas for the improv spectrum that bespeaks a rather casual gait, teeming with acutely-placed dynamics and inventions. The musicians employ close-handed chord techniques amid rippling harmonics and diminutive phrasings along with fractured themes. At times harsh via their strings-scraping manoeuvres and then nimble and verbose, the guitarists extend the boundaries and don't necessarily play by the rules here. And it's all good!

One of the pleasurable aspects pertain to the artists happenstance-like dialogues. On Flowing Water, they render intersecting currents with ascending lines while lowering the intensity in spots. But they also execute nimble soundscapes and rolling motifs, while tossing numerous curves into the mix. At the end of the day, the duo projects a rather low-key search and conquer mission where no stones are left unturned. A beguiling sojourn, indeed…"

"Truth in advertising definitely applies here - guitarists Marzan and Smith are indeed playing Spanish models of their instruments, unamplified and at length - but the pithy album title does little to describe the sheer diversity of sounds they unleash and that's probably the point. Marzan is certainly on the same page with Smith, though not the same paragraph. Even with the aid of stereo separation, both men are usually easy to distinguish. The illusion of amplification frequently cloaks their constructions, with brittle and scintillating tones hanging and decaying in the air.

Both men bring a full battery of extended techniques to bear on the bodies and strings of their guitars. Percussive movements also play a prominent part with one or both knocking and rubbing fractured rhythms on what sounds like all available surfaces, from wood to strings, to frets, and exploiting the natural resonances of both instrument interiors and room. Even at their most aggressive and discordant the duo sustains a surprising degree of confluence, echoing the old truism that the best improv circumstances usually arise through attentive and responsive listening. They also play disarmingly pretty on occasion as with the dulcet picked latticework that drapes Freezing Water. Parceling the various pieces by titles and individualised sounds eventually becomes a largely incidental endeavour and the whole has the feel of interconnected suite of sorts despite having been captured at several different sessions."

"These segments were recorded at Smith's home in total freedom, not an ounce of stress, using every available inch of strings and wood to produce a fine blend of improvisation that will draw garlands of acknowledging smiles around the neck of those who don't want to hear a standard anymore, not even having a revolver pointed to the head. The guitarists casually throw fragments of probabilistic intersections like enlightened litterlouts, without caring about their destination or the eventual need of some sort of aesthetic law to obey to. Coming down to the nitty-gritty, the rationale behind this method privileges the instantaneous exchange of information - whatever it is - as opposed to six-stringed sob stories and mellifluous vacuousness. Conversations that easily sustain the whole length of the CD, and we know that this label does not issue 35-minute discs. Significant free music played on guitar is for a special breed of elects. Marzan and Smith received the call many years ago."

"Warm in both acoustic and spirit, this album is on the one hand non-idiomatic free music but is on the other hand very idiomatic in instrumental terms. The entire range of the guitar is used and expressed here - chords both choked off and resounding, harmonics, struck and rubbed bodies, fragmented lines, and more. There's good separation and the musical distinction is often clear, with Smith's whizzing, skirling strings - that light and almost airy frisson he generates by whooshing up and down with fingernails - contrasting with Marzan's more pointillistic, note-based approach. The preparations on Flowing Water sound like dull, rusty metal - quite fine. Things grow sparser, at times almost balladic, on Freezing Water, with delicately chiming strings and the occasional cautious glissando or counterpoint And the miniatures of Sparrow Amour are as gentle as the bird song their name connotes."

"TWO SPANISH GUITARS is the result of several visits to Smith's home by the French guitarist Pascal Marzan, another elusive and sparsely documented figure. Echoes of the acoustic guitar literature spring up constantly across these mostly long improvisations: warped efflorescences of flamenco, Dowland lutesong, and Derek Bailey which shoot up in sparse clusters like wildflowers. The dialogue is intensely sympathetic but marked by a mutual affection for the arbitrary gifts of chance and momentary inspiration: gestures towards melodic coherence co-exist with a contrary tendency towards dispersal, into arbitrary sprinklings of bangs, pops and plings. The results are a music unlike any other you've heard: a wiry, semi-aleatoric comedy of the perpetually vanishing moment. "