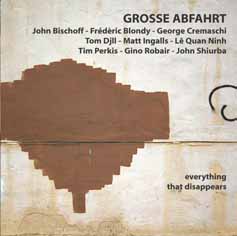 The group is called Grosse Abfahrt. This is the name I gave the project on the occasion of its first recording. In German, it means 'great departure'. The project is to take a core group of Bay Area musicians and put them together with out of town guests, usually Europeans. Always free improvisation. This recording marks the third iteration of the project.

In the spring of 2007 the San Francisco Bay Area was host to the crack improvising team of Lê Quan Ninh and Frédèric Blondy. Ninh (his given name, btw) hardly needs introduction, being solidly established as both a concert percussionist and improviser of range and sensitivity. Pianist Blondy has worked with a range of Europeans including Urs Leimgruber, Paul Lovens and the quintet Hubbub. The Lê Quan-Blondy duo recording, EXALTATIO UTRIUSQUE MUNDI (Potlatch P203), is a favorite of mine, so I was excited to learn they were coming to the West Coast.

I wanted to bring this pair together with the best San Francisco Bay Area improvising musicians in a larger context, consisting of the ‘Acme House Band’ players heard on SUPERMODEL SUPERMODEL (Emanem 4126), SIX FUCHS (Rastascan BRD 052) and ERSTES LUFTSCHIFF ZU KALIFORNIEN (Creative Sources CS 065) – Gino Robair, John Shiurba, and Tim Perkis – plus Matt Ingalls, John Bischoff, George Cremaschi and myself, for a total of nine. The music was to strive toward long structures – my sole bit of direction to the ensemble. We formed this particular ensemble just a few days after the death of Jean Baudrillard, whose book AMERICA served as the source for the album and track titles. I just picked some pages and read the first word from each line down for the latter.

John Bischoff is a professor of music at Mills College. Along with Tim Perkis, he is an acknowledged pioneer of live computer music. Gino Robair, Matt Ingalls, and Tom Djll all studied at Mills College in the 1990s. Matt now runs the modernist ensemble sfSound, which in 2006 performed at Wesleyan College and Merkin Hall in New York. Gino Robair founded The Splatter Trio and Rastascan Records and has performed with so many great people, it’s kind of silly to even start listing them. George Cremaschi’s list of playing partners is perhaps shorter but illustrious nonetheless, taking in Mats Gustaffson, Greg Goodman, Toshi Makihara, and Evan Parker. George splits his time between West Oakland and the Czech Republic. Tim Perkis recently performed a duo with Fred Frith at a local San Francisco venue and is busy promoting his movie Noisy People, which documents the Bay Area creative music scene. John Shiurba is a founding member of the ensembles Eskimo and Spezza Rotto, toured Europe and Japan with The Molecules, and in 2006 released a CD featuring Anthony Braxton playing John’s compositions for quintet, 5x5 (Unlimited Sedition / (Rastascan BRD 055).

"The guests are each a master of resonance, Ninh working on an assortment of cymbals and drums on top of a large horizontal bass drum, Blondy - perhaps best known for his work with the quintet Hubbub concentrating on the piano's interior with a range of techniques that includes bowing the strings. It is that focus on resonance that often defines this work, including an idea of circular, oscillating sound (the very movement of bowing) that seems concentrated at times in Cremaschi's bass and his particular use of electronics.

The group's focus is on extended improvisation, long unwindings of sound in which instrumental identities submerge into collective mind. Even the track titles - vertical readings from Jean Baudrillard's America - hint at new relationships in which sudden coherence may be as much the result of chance as intention and in which the fragmentary or discontinuous is equally valued. Thus, the longest track, geometric undulating driveway symmetrical, all the road of masters, is, at nearly 39 minutes, a world unto itself, populated with radio beeping, somber bowed bass and bass clarinet tones and a host of sounds that may defy ready identification. Everything appears hyper-resonant, from prepared trumpet to a sudden electric squiggle. While there's an underlying continuum of sound for long stretches, and individual gestures might sound deliberated, this is by no means minimalist. Near the half-hour mark, there's a sudden episode of skittering trumpet and bass that emphasizes the underlying unpredictability before the piece ends with a period of sustained high frequencies. Its ultimate shape, though, is always secondary to its immediate being, its sense of collective process.

The other tracks have their own distinctive qualities, at times reflecting a dominance of acoustic or electronic sound. negativity paradox achieved in humor realm is a relatively rambunctious piece that - without Shiurba, Bischoff and Perkis - is virtually acoustic. Admittedly, social relations This, with substantial electronics, seems more abrasive and, at times, much closer to conventions of improvised dialogue. Throughout, though, this is valuable work, with its own distinctive concordances and frictions."

"These four tracks were conceived following a single directive by Djll: 'strive toward long structures'. The longest one lasts almost 39 minutes; the music is vivid, pulsating, a perennial burning coal under the ashes of an only apparent tranquillity. Frustrating our attempt to categorise the happenings, the musicians move in, out and around their instrumental characters, reciprocally reacting to whatever exhalation they sniff. The nominal leader, besides his deceptively vacant trumpet and pocket cornet disguising a voraciousness for anything unpredictable, is also credited with 'preparations'; indeed, the continuously appearing extraneous factors disfiguring the regular acoustic voice of the machines, in conjunction with entities such as Robair's 'voltage made audible' and 'energised surfaces', are exactly what gives this concoction a unique tone, something that stands halfway through an incomplete vision (which is already enough to undermine a non-self-governing personality) and the moderate incoherence of a somnambulist walking on rusty nails and broken glass. There is no frequency left unattended, not a minimal tonal fraction whose activity is not felt. Electronic bleeps and harsh scraping coexist, different ethnic minorities in a suburban neighbourhood, fighting or embracing depending on the circumstance. Cremaschi's double bass in Geometric undulating driveway symmetrical, all the road of masters is akin to the peculiarly reassuring presence of an old dog in a shabby garden. Doesn't defend the property, but growls and barks anyway. Excellent record, a typical 'new-layer-with-each-listen' release which creeps on you like ivy, sucking juices from trunks and bodies."