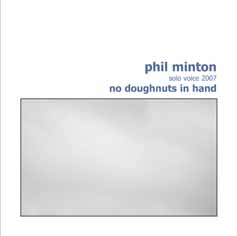 NO DOUGHNUTS IN HAND

This is the 3rd of my doughnut reduction series. I know things aren't getting better but I hope the singing cheers you up a bit. I would prefer to sing with other people and most of the time that's what I do. But it seems every ten years or so I need to sing a few songs on my own.

I recorded these pieces in the same order as on the CD and this is the best way to listen if you have the time.

"On his new solo CD, this sensible-looking man proffers 37 thin slices of his unfettered soul. Not long ago, these croaks, burps, high-pitched exhalations, deep-throated drones and shreds of garbled half-language would have seen Minton either burnt alive or hailed as an emissary of God. A two-minute fissure of majestically ludicrous babble, entitled i have given this much more thought than blair did before he decided to invade iraq, even manages to be satirical."

"As with the earlier volumes, Minton leaves laryngeal censors and shackles at the figurative door. Thirty-seven 'songs' zip by in just over fifty minutes, though their relative brevity doesn't necessarily lead to easy consumption. The collected sounds on many of the pieces superficially resemble a taxonomy of ethnic caricatures and speech impediments. The closer Minton comes to coherent speech, the less convincing and startling his creations. My favourite aspect is the array of imaginative imagery engendered by the sounds. The opener sounds like a prayer circle of asthmatic Gyuto monks. Title pieces 5 and 7 resemble the mush-mouthed mumblings of the Swedish Chef capped by Ricola-worthy yodels. Para five makes me think of Donald Duck's nephews Huey, Dewey and Louie, if throttled by piano wire. Self-inflicted strangulation factors into several other pieces.

Pure sound ventures are relatively few. The whirring drone on title piece 6 resembles wind gusting steadily through a ventilation pipe while 22 consists mainly of avuncular hums. 8 assembles a string of tea kettle whistles and screams. Minton's irrepressible humor bleeds through even on the more controlled pieces where he'll occasionally punctuate a concluding stretch of silence with one final gasp or sputter. Vo be dayish presents a Minton improvisation based on a Veryan Weston transcription of a Minton improvisation and curiously ends up the most conventionally "song-like" in structure. Weston also handles recording chores. The last piece, an improvised collection of strained sighs and eructation, layers in barbed political commentary with the admonition i have given this much more thought than blair did when he decided to invade iraq.

Most of the tracks are ones I probably won't put in regular rotation, but my admiration for Minton's art remains steadfast. Many of his oral expulsions require extraordinary muscular and respiratory control. Last year's SLUR is an easier sell as it features Minton's voice mixed with other instruments. This disc is for the truly brave souls able to embrace his improvisations sans such collaborative filters."

"The nature of these songs is as eccentric as the album titles. While there are obvious strands of continuity from those earlier albums, seemingly gone forever are the full-blooded vocal performances of 1975-1982, replaced by a far more exploratory, experimental approach to voice. The vocal improvisations here - ranging in length from twenty-four seconds to just under three minutes - are songs only in the sense that they employ the human voice. The sole exception is Vo Be Dayish, an improvisation on a transcription by Veryan Weston of an improvisation by Phil Minton, which verges on scat singing, albeit employing non-standard vocal technique.

Non-standard vocal technique barely does justice to the rest of the tracks: Para Five and Para Plus sound like nothing so much as two cats hissing and fighting; on the twenty-two tracks in the No Doughnuts In Hand series, Minton variously sounds like a chronic asthmatic, someone speaking in tongues, someone with a speech impediment, a heart attack victim, a Looney Tunes cartoon character, Mr. Bean, a Tuvan throat singer, a signal generator... a dazzlingly surreal array of sounds that belie the fact that they were all created by one human voice. These are sounds from the outer limits of vocal technique; listeners should not lightly be tempted to try to imitate them, unless they crave a sore throat or worse!

The tracks are presented in the order they were performed and recorded. This makes it fascinating to hear the evolution and development of Minton's ideas and techniques, as he returns to further explore past themes. The Breath Out series of seven short tracks is particularly innovatory, as Minton investigates the results possible with the exhalation of a single breath. Is this the end of the series, or can we anticipate Minus One Doughnut In Hand? Let's hope so."

"Followers of the resourceful vocalist will note that he started off with two doughnuts, cut that number in half, and now has none. It'd be tempting to see this as parallel to a paring down of his technique over the years, but if anything it's gotten wider, more expansive and creative, even as it's generally less flamboyant. In these 37 brief vocal incisions, Minton investigates overtones in detail rather than obsessing over splattery eructations or mallard-duck scatting. There's enough grunting and squealing to please his fans, don't get me wrong - just skip to pare five or the tortured baby of 16 for a sample. But there is also a songlike quality to some of this stuff, as on the muttering of 4 and 13, and this relative restraint and contented evocation of song-form is more compelling than much of Minton's wilder work. It's a highly enjoyable release, which takes some winning sidetracks, such as the mutant swing on vo be dayish and the lolling recorder/pipe organ tones on 22. And you gotta love his sine wave-y improvisation on 6."

"I wonder if England realizes how much of a national treasure Phil Minton is. His vocal experiments and all-out creativity have inspired scores of improvisers, male and female, yet none of them sound quite like him. This album consists of 37 short improvisations - vignettes, in fact, ranging anywhere between 30 seconds and a few seconds shy of three minutes. Although fragmented, the album works out very well just the same. The trap would have been to present a catalogue of Minton's extended techniques. Luckily, that is not what NO DOUGHNUTS IN HAND is about. Short as they are, the pieces are not mere exercises or examples, but surprise-packed improvised miniatures. The voice is naked, purely acoustic, and covers a huge range of sounds and textures, from all-out screams to belches, rasps and whispers, not forgetting Minton¹s patented Donald Duck singing and mad stream-of-consciousness rambling. (NO DOUGHNUTS IN HAND is as impressive as it is hilarious). The Breath Out series (seven pieces) features Minton singing on a single exhalation (about 30 seconds), working out a gamut of possible approaches in this limited territory. NO DOUGHNUTS IN HAND will not change your perception of Minton and his uncanny vocal art: fans already know this is a must-have (after all, the man releases one solo album per decade), and detractors would probably find a few more arguments to detract. In the end, though, this is a fun and cheerful album to listen to, in a radical free improvisation kind of way."

"Minton is 68 this year, but the spirit animating these improvisations is invigorating for just anyone who has a heart. His portrayal of hysteric wives, strangled ducks, interference-scarred radio speakers, multi-voice drunkards is as unique as the bumbling, uncoordinated stutter of a baby trying to emit the first utterances. This is not the place to write of the 'mechanical aspects' in free improvisation; this has to do with phenomena telling apart someone who's really, truly special from the masses of wannabes populating the music world.

Oh, right - what about the CD, you ask. 37 petite pieces to be guzzled like chips, one after another, for circa 51 minutes of entertainment, absolutely exhilarating, outrageously multifarious in their flight-of-fancy purity. Countless characters, virtuoso effervescence, well-dressed rage, cutting intelligence. Everything contained by a little disc, yet I'm in literal awe when thinking to the baggage of skill and quantity of discernment that can be enclosed by a single brain. A listening experience that brings back the joy of living, and the will to have a good laugh. A forgotten urge, nowadays, in the lands of intellectually contorted idiots who 'study' for decades only to be found speaking to themselves in the street at the end, having miserably failed every shot at intelligent action. Phil Minton, we owe you."