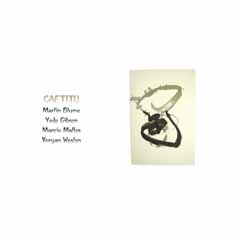 The freedom of the moment is fundamental in free improvisation; a new universe is created each moment, one where things can occur in a cause and effect chain. But our thoughts, like our improvisations, need not follow a logical order. In this sense, improvisation has more of a likeness with the real world than does written music, in which interruptions of “reality” are suppressed. In improvised music, unintended occurrences have to be accepted and treated as something important. We cannot exclude them. Improvisation does not exist the moment before it occurs, and when the sound fades away, no historical points of reference are left. Recordings of improvisations are essentially empty, and at best conserve the form. They are unable to transmit the sense of time or space or of the natural context, which for an improvising musician is like a score. They are simply documents, from and for the memory. By living the present with the greatest possible intensity we not only accept our historical context, but we live the circumstances of the moment to the maximum.

"Besides being a Brazilian mammal similar to a wild boar, Caetitu is also a stunningly efficient quartet. I was familiar with the involved musicians except Gibson, himself a Brazilian, whose style seems to be born for this ensemble: a unique cross of traditional legacies and hints to the future, his tone splendidly articulated throughout, the sense of note placement and spacing among the most satisfying ones heard recently between these walls. Weston's playing in this circumstance emphasizes elegance and self-possession at one and the same time, neat chordal chemistries recalling memories from other eras - chamber music meets beguilingly old-fashioned jazz, melancholy-tinged progressions flourishing in the splendid Membrance source. Mattos might go a little unnoticed at first, after we've been dazzled by the insightful expertise of the main soloists, but an attentive analysis of the low-frequency regions reveals a meticulous counteraction against the glut of lawless inventiveness, as he anchors the group's overall sound to that wide-ranging intelligibility that knowledgeable audiences expect from this calibre of artist. Blume's percussive presence defines, once and for all, that what was formerly intended as 'section' has by now been forgotten in favour of a methodical liberalisation of roles. It's life that dictates a rhythm: a drummer can't possibly recommend patterns to someone attempting to respire through a phase of polite self-determination. Accordingly, he's all over the place and then disappears, inimitable sensitiveness at long last revealed to glad receivers. Remarkable things."

"The kind of session that once might have come out on Random Acoustics, firmly part of the leading edge of European improvised music but with a distinct quasi-compositional sensibility that shades heavily into new music. Percussionist Blume is too seldom heard these days, and his playing - with equal measures restraint and oomph - is exactly the sort of thing that catalyses this music. Mattos, here on bass and electronics, shapes and colours the music almost imperceptibly, as Weston's piano plumbs melancholy depths with single-note, Bley-like reflections, and Gibson keeps things hot around the edges: his clarinet tone recalls Perry Robinson, and his biting tenor sidle always seems about to come unhinged in an Aylerian fit of ecstasy. The music coalesces and develops without the predictable rise-and-fall dynamics so often heard in non-idiomatic improv. Instead we have weird asides, suddenly appearing pools, and leashes of colour like Mattos's electronic storm at the end of Flush and Harmonize. The chastened lyricism of recent Evan Parker comes through in Gibson's grainy tenor on Membrance Source. Things do crash around a bit on No Repeats, quite nicely so after the relative sobriety of the record up until this point; there's a glorious bubbling section near the midpoint."

"Music improvisation is a language unto itself as this multi-national unit proves that point to the highest degree. Recorded live at a venue in Cologne, Germany, this quartet professes a multitude of ebbs, flows, styles and intuitive or at times didactic exchanges that signify some of the finer attributes of free-improv.

The band launches its sinuous attack with the opener titled Flush and Harmonize. On this piece, Yedo Gibson (Brazil) uses his Eb clarinet to instill some whimsy via lighthearted and animated phrasings. Then pianist Veryan Weston (England) scatters a pliant framework across the perimeter while bassist Marcio Mattos (Brazil) and percussionist Martin Blume (Germany) lay out the asymmetrical cadences. Here and throughout many of these passages, the lead soloists traverse all registers amid tiny fusions of melody and greater amounts of contrasting bursts of dissonance. And in many areas, tempers (musically speaking) flare up amid the musicians tension and release incarnations.

On the second piece Membrance Source, they execute a non-linear and somewhat ethereal framework, treated with Mattos use of electronics and Gibson’s moody tenor sax lines. Yet all hell breaks loose on the third and final work titled No Repeats, where the unit bobs, weaves, rises and descends via swirling countercurrents and fiery exhortations. Nonetheless, this is an all-encompassing exposition that communications a sense that these folks were acutely in-tune and the group-centric synergy was on the money as they say. (Recommended…)"