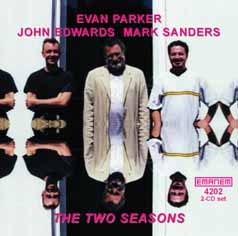 Soprano saxophone on B3 - tenor on the rest.
A3 is a percussion solo. A4 is a bass solo.

Evan Parker continually explores working with different combinations of musicians. He seems to settle on particular combinations, perhaps indicating their potential for development. An example of this is the trio with John Edwards and Mark Sanders, which has been performing semi-regularly for several years (sometimes with John Russell or Veryan Weston added).

Parker and Sanders have been working together since the mid-1980s. Until the mid-1990s, they often worked as a trio with Paul Rogers on local (mainly London) gigs. Rogers' relocation to France a few years ago coincided with Parker becoming aware of Edwards and the trio heard on these CDs came into existence. In fact, it was Veryan Weston who brought Edwards and Sanders together - hear their trio on MERCURY CONCERT (EMANEM 4028).

Like the other trios mentioned above, the trio on these CDs really is a trio rather than saxophone with rhythm accompaniment. There are remarkable examples of three-way constructions to be heard throughout the music, although there are times when the group drops down to a duo or solo.

The two concerts heard here are two of Parker's monthly gigs at the Vortex in North London. Each month tends to see a different line-up, but this trio is one that recurs. The atmosphere there is conducive to music making, with the audience usually quiet and attentive, and extraneous noises fairly minimal.

The music is presented in the order of performance. Additional track dividers have been inserted in natural gaps on both CDs. No editing was done at these points. These demarcations are just for the convenience of listeners who prefer shorter tracks, and perhaps facilitate the enjoyment of such highly sustained and concentrated music.

"One of the factors that make a musicians like Evan Parker so incredible is his restless, near obsessive need to keep evolving. Additionally, over the past few years, Parker has begun to work within an even greater amount of combinations, most of which bring out a slightly different flavour in his playing. With this two-CD set Parker has established a third formidable ensemble to go along with the Guy/Lytton and Schlippenbach/Lovens trios. Like those, Parker's trio with Edwards and Saunders takes the music somewhere completely different. Edwards is a fluid bassist favouring a sinewy low end, full of rugged pizzicato and churning arco that offers a malleable web of support. Sanders is a more rhythmic percussionist than Lovens or Lytton, serving up nervous constantly chattering volleys that are bit more perpendicular, where the others work with an implied pulse, which suits the rough hewn string work of Edwards. The result is a rhythmic tandem that is far more driving than the typical Parker session, and the trio frequently get entangled in a rapidly whipping three-way dialogue that is more about conference than individual soloing. Besides his usual idiosyncratic outpourings of torrential circular breathing, jagged scalar runs, and awe-inspiring overtones, Parker indulges in some reflective playing as he works over long, serpentine lines with a compulsive need to extract all he can from each phrase prior to moving onto the next. Parker is quite simply the quintessential post-Coltrane saxophonist, and I suggest digesting this as well as the recent FOXES FOX (EMANEM 4035) and AT THE VORTEX (EMANEM 4022) as works cited in support of this assertion."

"This is a fantastic album that would grace the shelves of any serious music lover. Parker must now be considered a saxophonist as important as Coltrane, Ornette Coleman or Charlie Parker and this outing finds him in fine company. Less virtuosic and intense than his longer-standing sax, bass, drums group with Barry Guy and Paul Lytton but by no means the supermarket¹s own brand. Edwards is possibly the least conventional bassist I know and, if he suffers somewhat in the mix, his flair for collaborative invention shines through. Sanders thrives in small group settings such as this. A great player, he seems in constant struggle with himself, driving the music onwards but never letting it rest in one place. Two long gigs are presented, one from February 99 and one from July of the same year, hence the title. The spirit never flags, the concentration is never lost there is no excess baggage."

"English saxophonist Evan Parker is renowned for his revolutionary technique, a melding of circular breathing, multiphonics and reed manipulations, which he incorporates into contrasting voices on soprano and tenor. Because of his groundbreaking solo soprano recordings, Parker's signature streams of intricately layered, independently shifting melodic, rhythmic and textural patterns are better known via 'the straight horn'. THE TWO SEASONS, however, features Parker primarily on tenor. On this two-CD set, Parker proves to be as equally original and proficient on the horn he considers to be the most difficult of the saxophones.

Leading a trio consisting of bassist John Edwards and drummer Mark Sanders, Parker's playing runs the gamut from gruff, sputtered fragments to gracefully arcing arpeggios in his lengthy solos. On the nearly half-hour Winter ii, his energy and idea flow demonstrates why he is equally important as German tenor player Peter Brotzmann in bridging the innovations of saxophonists John Coltrane and Albert Ayler with the emergent European free music sensibility of the late '60s. Some of Parker's most startling work occurs in more fragmentary passages on Winter v, where Edwards delves into subtle arco effects and Sanders employs a soft attack and auxiliary percussion. Fans of Parker's work on soprano only have Summer iii to relish. In this 17-minute piece, he cogently demonstrates why he is in a league of his own."

"Evan Parker seems to be coming out with a new recording every month, and they're all good. His improvising is, as it always has been, highly individual and immediately recognizable, but each new disc brings new possibilities and new rewards. This one is a double disc by a trio that is not Parker/Guy/Lytton. Instead, John Edwards is on bass and Mark Sanders on percussion. The differences are subtle, since Edwards and Sanders are both top-flight free players who well complement what Parker is doing. Sanders' kit is as full of ringing, shimmering things as Lytton's is, and Edwards is a percussive, energetic bassist like Guy.

But Parker, who sticks to tenor throughout both of these discs except for the third section of Summer, seems once again (as on the recent AFTER APPLEBY from Leo Records) to be in a relatively meditative mood. That's not to say that his tenor flights here are any less coiled and intense than they usually are - especially on disc one's Winter. But there are considerable stretches of Summer that seem to breath calmer air, and on which Parker discovers some quite ravishing music. See especially part ii, where he builds some impressive lyrical structures over Edwards' bowing. Is the Lion mellowing? Is the old renegade coming home? No - the differences I'm talking about are perhaps infinitesimal between this disc and, say, IMAGINARY VALUES from 1993. But perhaps he is in a certain sense emphasizing and recapitulating some of the musical possibilities of the discoveries he's made over the last thirty years. Both of these discs are, in any case, fascinating and beautiful, with superb playing from all three musicians."

"After much thought and many listens since I bought this disc about two months ago, this is the recording of the year. This is the coming out party for those who want to be welcomed into the world of Mark Sanders, who is (also after quite a bit of thought and listening over the past six months), the most exciting, original and overwhelmingly powerful drummer alive. and this pains me to say it, but this includes Jim Black & Hamid Drake, two drummers who have also reinvented the possibility of the drums in a modern jazz/improvisational ensemble. Sanders does them even a little bit better or with a bit more pep and energy.

And like Bill Beran (an experienced listener to this music) said recently, Evan Parker might be the greatest of all the post-Coltrane tenor players. I've listened a bit to them all - and love many of them - but there are moments (Summer i & v to start), that would convince anyone who is not trained to think otherwise that the answer to the question might not even be an issue worthy of discussion. I just finished the second disc, and although I emotionally overreact to music on a regular basis (HA!), repeated listens to this performance over the past two months only convinces me more of the man's place at the pinnacle of tenor saxophone mastery. In fact, I think his place in the oeuvre of the history of the instrument is highly undervalued-and is common to this type of music (free improvisation), the actual sound and performance of some of this stuff would surprise and excite many who might think it non-swinging or bemoaningly obtuse.

Like AT THE VORTEX, this music swings, grooves, and rocks out, and Mark Sanders is the reason here-as he is a supercharged engine, with a sound that hasn't been invented until he invented it."