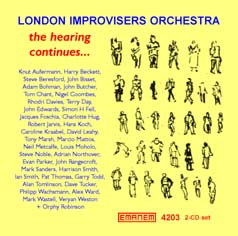 The most important trend over the last couple of years has been how the music gets more and more together. In spite of all the comings and goings, the orchestra gets tighter, so that it has become an even more coherent improvising unit. One can hear the additional developments by comparing this album with the Orchestra's previous publication (PROCEEDINGS) from the previous year.

The recording session was set up to capture a cross-section of the Orchestra's music that had been occurring at the Red Rose concerts. The 37 musicians present made it the largest version of the LIO to date. Even so, there were some regular members who were unable to make the session. Lol Coxhill and Orphy Robinson were unable to be there, as were several brass players: Gail Brand, Borre Molstad, Roland Ramanan and Paul Rutherford. (Since Robinson also missed the previous recording session, Evan Parker decided to create a piece which Robinson could overdub at a later date - Orphy:Us.)

The sights at the record session were quite amazing: Four drummers with full kits; three grand pianos (played by three grand pianists); three bass clarinets; three double basses; and so on. The feelings were very positive throughout the session, just as they had been the previous year, and a considerable variety of pieces were recorded. They included free improvisations, conductions and rule-based schemes, and in one case (Fire - in the Air) the musicians reacted to a film.

"The kind of intensity, excitement, and invention that this ensemble creates via spontaneous means is unique in New Music circles."

"A quick look at the name of this ensemble brings to mind Barry Guy's London Jazz Composers' Orchestra, but then one centres in on a key difference. So what is the difference between an Improvisers Orchestra and a Composers' Orchestra? While Guy pulled together the LJCO and acted as its guiding force, the London Improvisers Orchestra is more of a collective unit with no single leader. They were originally assembled in the fall of '97 to tour a conduction by Butch Morris. The line-up was culled from an impressive range of London-based improvisers, crossing generations as well as stylistic strategies. With a membership of 30-40 musicians, this aggregation meets on the first Sunday of every month at the Red Rose in North London. What this phenomenal gathering of reed players (11), string players (11), pianists (3), percussionists (4), brass players (4), along with various members playing electronics, bamboo pipes, and "objects (some amplified)" offers is a group of open-minded, adventurous artists who are committed to exploring new strategies for large-scale improvisation in a truly orchestral setting. And all of this might easily be undocumented were it not for the grace of Martin Davidson's Emanem label, which has released this, the second 2-CD recording of this startling music. So back to the question; what is this Improvisers Orchestra?

Well, they are certainly an orchestra that dives in headfirst to collective, spontaneous large-group explorations as documented on Proceeding 3 and Proceeding 4 which kick off each CD of this set. These are complexly nuanced interactions full of dynamic modulations that seem next to impossible considering the overwhelming number of participants. Yet they pull it off with impressive collective interplay.

But this orchestra also provides a striking, expanded setting for the members to explore compositional frameworks for improvisation (which kind of gets back to being composers, doesn't it?) Of course with musicians like these, compositional frameworks take on all sorts of guises. A few highlights include Alex Ward's How Can You Delude Yourself? is a piece that has only two 'rules'. The first is that whenever a player hears the smallest amount of silence, they must start playing to fill the gap. The second is that when anyone becomes aware that there are two others beside themselves that are playing, they must immediately stop. With two instructions that constantly cancel each other out, the ensemble is thrown into a dynamic hyper-awareness and the music leaps and lurches around with needlepoint give-and-take until a collective conclusion almost magically emerges.

Simon Fell's Morton's Mobile takes its inspiration from Morton Feldman, and serves to focus around specific sustained chords drawing out an extended sense of harmonic shading and subtly gradated, hovering momentum. Dave Tucker's Red Rose Theme says more about the theme of spontaneously conducted improvisation than it does about thematic material as the foundation of a composition, with its caterwauling sections for Hans Koch's contrabass clarinet, the woody chalmeau of Alex Ward's clarinet, and the grumbled textures of Alan Tomlinson's trombone tumbling over Adam Bohman's 'scraped objects'.

Knut Aufermann's Birthday Piece revolves around the use of numbered cards as a cueing device. The simple rule is to 'play when the number shown is part of the date of your birth'. What this leads to is a constantly shifting transition between sub-groupings of players that ought to be disjointed mayhem but ends up being a study in detailed, conversational pointillism. In lesser hands, these compositional strategies could come off as mere contrivance. Instead, they serve as fertile springboards for collective discovery.

Two pieces for smaller group improvisations provide a chance to focus on particular sections of the orchestra. Dingos Creep for saxophone sextet (Tom Chant, Evan Parker, Caroline Kraabel, Adrian Northover, John Butcher and Garry Todd) bring a compositional sense to the six-way spontaneous interaction as the six horns weave a web of lace-like delicacy. Lines criss-cross and slowly converge on hovering chords, only to arch off again with tightrope control that only comes from the most unwavering attention. Music for Pianos, Percussion & Harp offers the unique opportunity to hear the piano interactions of Pat Thomas, Steve Beresford, and Veryan Weston with harpist Rhodri Davies joined by percussionists Mark Sanders, Louis Moholo, Tony Marsh, and Steve Noble. The piece evolves as a masterful study in textures and contrasts.

Throughout, the crystalline studio recording captures every subtlety while managing to create a sense of the musicians filling the room with sound. So in the end, an Improvisers Orchestra provides a setting for the members to explore and improvise; a setting to test out strategies for guiding a collective ensemble as an organic process; and a vital laboratory for a spontaneously evolving group of dedicated musicians. Kudos of course to Emanem for documenting this amazing endeavour for those of us not lucky enough to make it to the Red Rose."

"This is the second recording by the London Improvisers Orchestra and, as good as the first one was, this one is even better. What is most impressive about this aggregation is its democratic approach.

The two Proceedings here seem to indicate the extra year's existence. The group seems much more focused and well-directed. Ensemble sections tend to emerge and recede into the group as a whole much better than they did on the first LIO disc. Dingo's Creep is an improv for the saxophone section (six members strong) which starts from a series of deliberately pecked phrases from Evan Parker which gradually fill out into a sextet, in which the saxophonists slip unobtrusively in, around and through each other's lines. Music for Pianos, Percussion and Harp uses another subset of the orchestra to create a unique textural exploration. The first section consists of the pianists and Rhodri Davies' harp. With the pianists exploring the insides of the piano as much as the keyboard part, the pianos almost become harps themselves. When the percussionists enter, the piece becomes a barrage of wood, skin and strings. It's a well-modulated improvisation (as are all the unconducted improvisations).

The more formal pieces are no less interesting. Simon Fell's Morton's Mobile was inspired by a hearing of a (composed) work by Morton Feldman where the materials gave the music the impression of the flexibility of an improvisation. Fell attempted to use the same devices for this improvisers' group. The musicians carry it off with aplomb (at least to these ears). For Pat Thomas' Pulse Piece the orchestra is divided into subsections, each being assigned a different pulse (different from a beat or rhythm.. it has more to do with a musician's sense of flow) which at its apex creates a remarkable mass of orchestral tension.

The LIO has in a short time become one of the most formidable large groups working in music. They sound like an edgier version of what has now become the venerable London Jazz Composers Orchestra, with a flexible but surprisingly consistent membership, and a generous approach to compositional chores, they have created a remarkable thing: a contemporary big band capable of free improvisation as well as compositions and conductions. Let's hope the hearing continues even further."

"Highlights include both Proceeding 3 and Proceeding 4, much stronger than the two corresponding pieces found on the ensemble's first album. Weston's Concerto for Soft-Loud Key-Box is a beautiful piece of cynical humour as the orchestra mimics a more traditional version of itself. For How Can You Delude Yourself?, Alex Ward gave the orchestra two simple but counter-effective directives: whenever nothing is played, you must play something immediately; whenever more than two other musicians than yourself are playing, you must stop. The resulting piece evolves from timid staccatos to orchestral punches - very entertaining. The same comment applies to David Leahy's Prior to Freedom, where at one point all musicians are asked to play whatever they were playing before turning to the free improv scene. The resulting cacophony of Beethoven, rock, jazz standards, and miscellaneous bits is simply hilarious.

THE HEARING CONTINUES documents a much stronger ensemble, fully matured, who still follows the 'laboratory' concept but with better results. This album is simply one of the best examples of a creative orchestra and presents one of the highest talent-per-cubic-feet ratio in history."

"The Orchestra improvises piece for the most part within rules or directions set by individual members. Some inevitably work better than others, and it's not always easy to predict which from the instructions. A favourite for me is Concerto for Soft-Loud Key-Box, a piano concerto created and played by Veryan Weston and conducted by Steve Beresford in the manner and form of a classical concerto. Equally effective but strikingly different is Morton's Mobile by Simon H Fell (drawing elements from a piece by Morton Feldman) that calls on the musicians to improvise with minimal material. At the end of the day, however, the most lively and affective pieces are the freely improvised tracks, though the compositional devices offer fascinating oblique views of the Orchestra's collective consciousness and provoke welcome reappraisal of the art of improvisation."