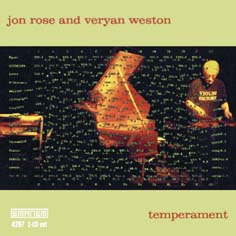 "If the 20th century represents the culmination of full chromatic modulation through the use of equal temperament, with the stipulation that each key should sound the same as each other, then surely, as many composers have discovered, most harmonic possibilities have been fully exhausted," writes Veryan Weston. "In our contemporary context it is therefore perhaps necessary to address the needs of the artist who still wants to use pitch and interval as a means of creative exploration and expression by reopening the enormous possibilities of different intervallic relationships, i.e. something far more fluid and intangible. Our society has been so conditioned by the omnipotence of equal temperament that perhaps more naturally derived harmonies based, say, on the overtone series, might sound out-of-tune. Maybe we should all go and listen to the Pygmies, and if we already have done, listen to them again."

I like to think that something resembling the music on this album could have existed at some point back in time, two, three or even four hundred years ago - improvisation is, after all, as old as the hills - Couperin and Rameau must have hit a few nasty clusters (if only in frustration at the harpsichord's propensity to go out of tune so quickly), and it's hard to imagine Ludwig Van in his declining (y)ears not bashing hell out of his piano once in a while, "giving the chord the test of time", to quote Carl Ruggles. In the European classical tradition, being able to improvise used to be highly valued (cadenzas in concerti from the mid 18th century onwards were improvised by the soloists until composers started writing them out in full), and many composers were virtuoso improvisers themselves, including Chopin and Schumann (whose piano music often sounds like nothing more than transcribed improvisation and often gets stuck in a rut as deep as the KÖLN CONCERT).

Jon Rose and Veryan Weston are also virtuoso improvisers: their two 3 Part Inventions are veritable tours de force from a technical standpoint: Rose's violin line, if it were transcribed, could give Irvine Arditti a run for his money, while Weston's spiky two-part counterpoint recalls Conlon Nancarrow - and, standing behind him, mighty Bach. Not content with two-part counterpoint, on the three Tone Ladders Weston plays two instruments at once (set at right angles to each other). Older keyboard instruments, as Rose points out, are capable of nuances that brash modern concert grands just can't manage. This is inspired stuff, and the interplay between the two musicians is extraordinary.

Listen to how the choice of a particular temperament dictates the structure of the music; in the three Forks Weston explores as many thirds as he can get his hands on - minor and major, all different thanks to the just tuning - while Rose concentrates on the open strings, eventually leading Weston (in Forks 3) to career round the cycle of fifths himself. (Special mention ought to be made of the tenor violin specially built for Rose by Sydney's Harry Vatiliotis, which, to quote Rose, "almost defeats the physical laws of sound being not much larger than a violin but kicking ass at an octave lower.") The four Harmonious Anvils confront the problem of Equal versus Mean Tone temperament head on, with one manual of Weston's harpsichord tuned to the former and one to the latter. The tiniest changes can have great impact, and Rose chooses his violin tunings with meticulous care to correspond to the different temperaments. Tuning the violin down to A=425 really takes the brightness off the instrument, and the Melodic Fragment explores this fragile, pale world with delicacy and restraint. Elsewhere, the dark woodiness of his violin on the three Tuning Wheels and the mysterious quarter tones of the Rosenberg Orgonium are perfectly suited to each other.

In Search of the Pythagorean Comma 1 finds our protagonists in a freezing cold theatre in Venice, forced to warm themselves up by a vigorous exercise (imagine Nancarrow, Ligeti and (early) Glass all stoked with amphetamines and let loose on Harry Partch's instruments), while Mendel's Library was recorded in Mendel's Monastery in Brno, Slovakia. Whether that city's most famous son Leoš Janácek actually played the wheezy old harmonium is open to question, though according to Weston he "used to bang away on the organ in an adjoining room on which he composed the Glagolithic Mass." Rose's concentration on open strings and harmonics (as the most audible manifestation of his chosen tuning) finally unravels like his lowest string, reaching a point where the slightest change in bow pressure produces wild fluctuations in pitch, an effect analogous to the harmonium's half stopping. Weston modestly points out that the practice of pulling out the stops very slowly to create subtle and unstable microtonal inflections was also used by David Tudor, the result being that pitches and timbres intertwine and mutate like strands of DNA - Gregor Mendel (1822-84) was, after all the father of modern genetics.

Lest things get too serious, there's always The New Guinean Dentist, featuring the Payawipaya keyboard and the wild flurries of harmonics from the 16-string long neck violin. If you have perfect pitch, you may, as Rose puts it, "toss your cookies", but I can't think of a more rewarding album to toss your cookies to.

"May I have your attention, please? This double CD is a MILESTONE of improvisation, a must for any person even slightly interested in new forms of sound expression and freedom of speech, an extraordinary pairing of two most intelligent musicians, exploring new languages through the use of different esoteric tunings, ratios and...temperaments. The juxtaposition between the physical results of those approaches and the creative mind of Rose and Weston brings us to the highest level possible in music today: something near the total perfection. Using their arsenal of violins and keyboards (including a 16-string-long-neck instrument and something called 'Rosenberg Orgonium', among the many) these geniuses range from just intonation to 'Meantone 1/4 comma' with the urgency - but also the grace - of a waterfall breaking up in millions of new colours. You must have a really inquiring ear... and a well prepared brain to capture the whole essence of TEMPERAMENT; within this record lie the influence and the inspiration of Nancarrow, Berg, dodecaphonics, minimalism, free jazz, whatever... filtered through the wonderful hands of Jon and Veryan, two real technical monsters. Already a follower since a long time ago, now I'm completely drugged on this stuff. To be listened for many, many years to come, this release belongs in my all-time top 20, for sure."

"Even by violinist Jon Rose's usually bizarre standards, his duet recording with pianist Veryan Weston, TEMPERAMENT, is rather unique. Working with various tunings and tempered scales has mainly been the province of classical composers. It's unique that two improvising musicians have opted to work in this area, but frankly, I think this may be the most effective avenue for this type of exploration; it's an area that can give improvising musicians unlimited new avenues of expression.

This is some of the most alien music I've ever heard. One's ears need to take time to adjust, but when they do, this music becomes some of the most sonically effective (and satisfying) I've ever heard. Tone Ladder 1, after a section of dense active improvisation, breaks into a section of breathtaking beauty. At times the music takes on an almost electronic character. In parts of Forks 2 it sounds as if Rose us squeezing sparks out of his violin. Mendel's Library sounds like it's being beamed in from Venus due to the weird acoustics inherent in the performing space. Weston is playing Janacek's harmonium in the low register and Rose has his tenor violin set at a very low tuning creating a very strange yet haunting effect; Rose and Weston are virtuoso players as well as virtuoso improvisers.

I can't say enough about this record. It's an amazing document and strikes me as one of those recordings whose importance and brilliance will only increase with time. But listeners beware: this is dangerous music. Several times after an extended listening session to these discs, whatever I chose to follow it up with just didn't sound right. I think Rose and Weston would be happy to know they've made such dangerous music."

"The music represents a considerable devotion to investigating what can be played and what harmonic relationships can develop when pre-performance decisions are carefully determined by the desire to hear new worlds. The music soars. Rose and Weston expertly improvise with the range and relations that each tuning procedure makes available. They find the rhythms that juxtapose intensely bizarre and egregiously gorgeous musical phrases; hear In Search of the Pythagorean Comma 2. The strings themselves seem to be startled by the frequencies vibrating in the room: shrill tinglings resonate beyond the instruments, and on Mendel's Library overtones flood the distinctions between echoes. Four tracks feature Weston playing a 2-manual Zuckermann harpsichord, with one in equal tempered tuning and one in mean-tone tempered tuning. During these four Harmonious Anvils, this triple interplay of pitch texture provided by the two keyboards and tenor violin fabricates a simultaneously alluring and surprising weave of notes: they arc and swing and exhale into each other's stretching canvas. I found myself perking my head up like a cat at regular and frequent, though admittedly not equally measured, intervals throughout these recordings."

"Here we have no fewer than 23 improvisations, ranging from the forbidding to the playful and delivering at all points en route, which between them cover a scary assortment of tuning rationales, each of which is described in detail in careful but resolutely un-tedious detail in the copious booklet notes. That said, these two musicians could produce a stimulating set using nothing but a rubber band and a Sooty xylophone tuned to bugger all, and the music presented here certainly has more to do with them than the systems they employ (which may be critspeak for 'don't be put off'). Along with all that, though, TEMPERAMENT manages to function as a highly entertaining, instant evening class devoted to non-standard intonation, while also addressing the current whither-improvisation question with a kind of casual seriousness. Remarkable."

"The two musicians use all kinds of tunings, often more than one at the same time (Weston even has the two registers of a harpsichord tuned differently in one piece). Rose plays mostly on his tenor violin, but also takes out some of his mutated inventions (like the 16-string long neck violin). Weston shifts between grand piano, harpsichord, harmonium, and organ. No matter how broken to free improvisation and atonality you may be, these recordings sound strange, alien, even more so that they feature a piano/violin duet, the most beaten-up instrumentation in the history of Western music. If the two musicians had been third-rate players, it would make it unlistenable. But Rose and Weston are among the finest improvisers on this planet. Their level of listening, interaction, and exploration of these u nusual tunings make TEMPERAMENT a fascinating, albeit disorienting listen."

"Here we have a strange and great double CD set of music done by two great musicians whose goal is to reach new frontiers in experimentation. Here this two masters explore all the sonic possibilities of their instrument using a lot of different tunings and temperaments. It is amazing how well these two superb musicians use these tunings and temperaments achieving new sounds and making interesting and strange sounding melodies. I will strongly recommend this two CD set to people who want to open their minds and let their imagination flow. I would specially recommend it to musicians who can learn a lot how to experiment with this elements that are used on this amazing recording."