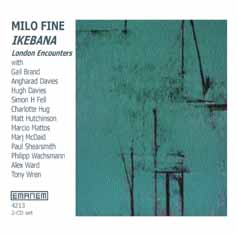 In 2003, multi-instrumentalist Milo Fine, the leading light of the Minneapolis improvising scene, made his second visit to London. During his extended stay, Milo Fine performed at several gigs and private sessions with quite a few of the members of the London improvising scene. Two appearances have already made it to CD - the very first gig, a duo with Derek Bailey (EMANEM 4099), and the FREEDOM OF THE CITY set (with Hugh Davies, Paul Shearsmith and Tony Wren) (EMANEM 4212).

The bulk of the material on this double CD, chosen by Fine with my input, comes from the Free Radicals series that Tony Wren curates at the Red Rose on the first Wednesday of the month. And while the final choice for personnel was left to Fine, Wren offered suggestions which inadvertently led to the inclusion of the London Bass Trio (in April) and Quatuor Encorde (in May). But, rather than formal groups, Fine preferred to have all the musicians on stage at once, allowing for their experience and sensibilities to form various groupings according to the dictates of the moment.

The extended octet piece is the opening (and longest) item from the April concert. In spite of the unlikely instrumentation, it works beautifully. The opening section is fairly subdued with Fine's piano and clarinet alternately interacting with the strings, sometimes augmented by Matt Hutchinson's synthesizer. Marj McDaid's amplified voice does not enter until about a third of the way through initially just with strings, then with the addition of synthesizer and clarinet followed by drums. A loud passage for drums and double basses quietens down when the violins and voice join in, leading to a very still passage featuring Angharad Davies. The drums and synthesizer break the stillness giving way to a section featuring just the double basses. The others rejoin for an agitated moment before the piece ends peacefully.

The lively duo tracks with clarinettist Alex Ward were recorded in my living room. A pair of clarinet duets is followed by a clarinet and drums duet.

The day after the FREEDOM OF THE CITY appearance, there was gig at the Klinker, a twice weekly venue curated by Hugh Metcalfe. Skinny Frogs is the first piece by the trio with veteran pocket trumpeter Paul Shearsmith and the excellent trombonist Gail Brand. The music is generally rambunctious - the quieter passages tend to let other unwanted voices be heard.

The second CD contains virtually the whole of the May Free Radicals concert - the day after the Klinker gig. Philipp Wachsmann had a prior commitment which meant that he couldn't get to the Red Rose in time for the start, so the first piece began without him, with the instruction that it would end as soon as he appeared. The music has as much variety as the April session, with even a hint of Eastern Europe at one point. Apart from Hugh Davies' Multishozyg and other home made items, all the instruments were used without amplification. This was Fine's final concert on this extended trip - the following morning, he flew back to Minneapolis.

"During the spring of 2003, Milo Fine spent five and a half weeks in London - a time of explorations, playing and networking that has yielded a good number of recordings, the most impressive being this 2-CD set. Disc 1 begins on an involving, shapeshifting 38-minute piece featuring Fine (on clarinet and piano for the first quarter, on drums afterwards), violinists Angharad Davies and Philipp Wachsmann, bassists Tony Wren, Simon H. Fell and Marcio Mattos, vocalist Marj McDaid (who actually remains very quiet throughout, almost unnoticeable), and longtime Chris Burn Ensemble member Matt Hutchinson on synthesizer and electronics. The piece includes a wide range of dynamics, lots of sub-group interplay and acute synergy. The three duets between Fine and clarinetist Alex Ward are of a different breed. The clarinet duets get expansive, even raucous, while the clarinet/drums duet Fine Ward Mill Hill provides the highlight of disc 1, thanks to its playfulness and all-around engaging quality. The last performance on this disc is by Fine, Paul Shearsmith (pocket trumpet) and Gail Brand (trombone). The trio shows promise, but this particular piece is slightly bland, lacking the levels of invention and sensibility witnessed earlier.

Disc 2 is entirely given over to the May 'Free Radicals' concert, featuring Fine (again on clarinets, piano and drum set), instrument-builder Hugh Davies and the Quatuor Encorde, which evolved from Wren's Quatuor Accorde and here comprises Wachsmann, Mattos, Wren and violist Charlotte Hug. The first piece (performed as the group was waiting for Wachsmann to arrive) includes some overstretched moments, but otherwise this is a very fine concert of intelligent, sensitive, mostly-acoustic free improvisation. Fine manages to marvellously blend in his percussion work with the interlacing strings (his piano playing is not as successful, but still relevant). This second disc invites repeat listens and is alone worth the price of admission."

"London in 2003, the sessions recorded with local musicians at Free Radicals in the Red Rose will remain as some of the most interesting music released by the Emanem label. Not necessarily the best or the most successful - that depends on what you expect - but the most interesting. IKEBANA has its lighter moments, but sometimes serious things happen. Minneapolis-based pianist, clarinettist and drummer Fine is content to share the experiences of his playing partners rather than setting his own musical agenda, or following the now standard Berlin or London aesthetics. His duos with clarinettist Alex Ward and the trio with Gail Brand and Paul Shearsmith recorded at the Klinker are enjoyable and flexible, and his gutsy clarinet playing makes a welcome change from the academic approach of many others on this instrument. April Radicals is a fine example of an in-the-moment situation succeeding against expectations due to the openness and the experience of the eight players involved, it moving from agitated tutti to solo violin (Angharad Davies). A month later, the May Radicals band consisted of Fine, the latest incarnation of Wren's Quatuor Encorde (with Philipp Wachsmann on violin, Charlotte Hug on viola and Mattos on cello) and Hugh Davies, in a rare and successful appearance. Although the recording is far from ideal, the interaction between Davies' Multi Shozyg and the string quartet is enthralling. The strings amplify Davies' sounds, colouring them with cunningly chosen pitches, while Fine provides an intelligent instrumental commentary in complete communion with the breath and flow of the five-headed sound machine. You'll wish you'd been in the Red Rose that night."

"Milo Fine epitomizes the figure of a multi-instrumentalist improviser; this double CD sees him in company of illustrious fellow spirits during his 2003 London visit. April Radicals mingles various strings, electronics and voice with clarinet, piano and drums in an imaginative piece crossing chamber settings and piquant segmentation, with three double bass players in beautiful growling balance. Three clarinet (plus drums) duets with Alex Ward seem to file the cutting edge of a tetanic flick knife carving mouthpieces to deviate the regular blowing, until Skinny Frogs (with Gail Brand and Paul Shearsmith) brings back a measure of tranquillity - not without some flickering flame of ironic ludicrousness. The whole second disc is made of May Radicals, a five-part sextet where the coordinates vary according to the spur of the moment: now a next-to-silence exploration of hollow timbral interiors, then a couple of piano reflections amidst a remarkably self-regulating group autonomy; all of which brings the musicians to a series of fair-minded exchanges of scrutinizing looks to each other. "