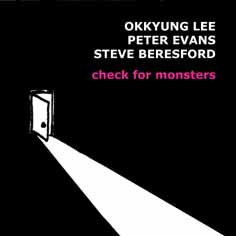 in the spring of 2007, my dear friend and film maker andrew lampert was invited to do a piece at the kill your timid notion festival in dundee, scotland, and formed a trio with steve and i along with the great mark sanders to play our versions of classic gershwin songs to his images… over that short period of time we were over there, steve and i had a great time not just playing but also wandering around the town of dundee – such exploring is also one of my specialities…

then not too long after, i believe it was that following summer that steve came over to new york and while we were having lunch together, we thought 'wouldn’t that be nice to do a birthday concert together in our birth month…?' then it turned out andy happened to be scheduled to curate first 2 weeks of march at the stone in new york…

we both got very excited and started to organize the practical matters and thought we needed one more person to round up the group… just in case things don’t work out with only two of us… we both knew peter and thought he would be a great person to play and hang out with… then fate had its twist and andy had to move his curatorship to may, but elliott sharp who was curating march was generous enough to keep our date in march… then jim staley from roulette gave us a date to help bring steve over… then we added a couple more concerts to do a mini tour…

"This freewheeling, pinball-machine of a trio ricochets their music off jazz and classical music references, pings pure sounds against one another, and let their melodic lines roll wherever their momentum takes them. It’s a music that takes joy in its intelligence and delights in its wit, but maintains a seriousness of purpose and exacting discipline. A kind of rampant glee animates the four improvisations on the disc. Each one rushes from trio to different duo combinations to solos, and back around in their mad enthusiasm to make music. Evans possesses an uncanny ability to suggest historical antecedents in the midst of even the most outrageous modernisms. On Yinothanot he segues from muted phrases that lash about like an unhinged Dizzy Gillespie to unsanded textures, from propulsive riffs to knife-edged high notes. Lee’s sonorous cello never sounds like a higher-pitched substitute for a bass. Much of her vocabulary is derived from classical cello and the dark sonority of her arco work lends her work a great presence. On Phacthio the foundational rhythms she lays down drives large stretches of the improvisation, and her dry scrapes, staccato mutterings, and gleaming viscous arco deepens the music’s textural variety. Beresford plays with an eagerness, confidence, and balanced touch that energize the music without dominating it. On Gwendol ap Siencyn he seems to be everywhere at once, a mercurial, antic presence whose phrases elbow each other out of the way as they bound off in new directions. Despite the classical allusions, the trio’s music is something more than chamber improvisation. It’s too vibrant, too mercurial, and too personal to be so easily confined."

"This collaboration between cellist Okkyung Lee, trumpeter Peter Evans, and pianist Steve Beresford is a fortuitous rnatchup. Luckily, the tapes were rolling at their performances in New York and Philadelphia. Each of the musicians brings prodigious chops to the music, along with lightning reflexes and a refined ear. The results are careening, warp-speed improvisations: Lee's cello bucks and shapes, dive-bombing from skittering upper-register lines into dark, low-end groans. Evans proves yet again that he is one of the most inventive young players on the scene these days, combining breathy smears with spitfire flurries that draw on his jazz roots. Beresford draws on his four decades of experience, tossing off percussive chords, hammered torrents, and angular free counterpoint, and showing off his wry sense of timing and phrasing. Its an intimate meeting of minds without a safety net, and Lee, Evans, and Beresford prove they are up to the task."

"The three players work extraordinarily well as a unit, as each has a clear relationship to both scumbled mass and elegant poise. The short improvisation that rounds out their Roulette set, Egokrlo-nar, manifests this perfectly. Beresford plays with Satie-like song fragments and Mikrokosmos clusters as Evans' breath darts in high arcs and splays out in metallic circular breathing, while Lee is devilishly swooping and percussive. This trio has made scrabbling power into elegant play."

"This trio brings together superb improvisers who are not immediately obvious as a compatible threesome but who combine together to stunning effect. Before they came together, the three possible pairs formed from its members had each collaborated, and this contact shows through in the players' reactions to each other. Throughout this recording, they display familiarity with each others' playing, reacting rapidly and appropriately. Across four improvisations — three of which are extended — the combination of cello, trumpet, and piano creates a surprisingly energetic soundscape. If the instrumentation creates an expectation that the music will be cool, with some chamber influences, then such expectations are unfulfilled. Instead the three players generate considerable volume and momentum, with each of them making an equal contribution; none of the three drives things along alone — they all do.

From a subdued start, the opener, Phacthio, gradually builds up awesome energy, driven along by massive block chording from Beresford and arco lines from Lee that are often felt as much as heard, all overlaid with stuttering blowing from Evans in the upper register that repeatedly demands attention. The piece is improvised, so there is no sheet music for it. However, if there were sheet music, it would doubtless be headed Allegro Con Brio. Exciting and richly rewarding."

"While this trio’s deft improvisational tactics might infer a heady viewpoint, the overall tone of the album notes and monster depictions drawn by trumpeter Peter Evans will suggest more of a cartoon-like sequence of events. In its natural state, this is not lightweight stuff, especially when we consider the trio’s various trajectories and intense three-way interactions. But on the other hand, we get the feeling that the musicians don’t take themselves way too seriously. In effect, the artist’s digitally recorded concerts convey moments of innocence amid sequences of brooding mini-motifs, spiced with counterpoint and fluid dialogues.

On the opener Phacthio, the band conjures up an ominous vibe due to Lee’s fervent arco lines and pianist Steve Beresford’s mammoth block chords. They gradually pick up steam, where Evans helps lead the charge via rolling and tumbling storylines that spark imagery of a mass exodus. Nonetheless, many of these movements offer a set of cataclysmic circumstances akin to Godzilla trouncing all over Tokyo. They generally abide by an aggressive and prismatic gait. Evans’ occasionally uses his mute to weave around his partners' swirling overtures and probing exchanges. On the final piece Gwendol ap Siencyn, the musicians buzz around like bees hovering atop a hive. Here, the trio engages in gut-busting dialogues amid open-ended improvisational episodes and revisit the initial circular theme for the finale, although they don’t recreate anything in exact or literal fashion.

Like our beloved Japanese monsters, the trio inflicts terror into your nerve endings. All kidding aside, this is freely improvised music that intimate waves of emotive attributes and gobs of contrasting musical propostions. (Highly recommended for advocates of free improvisation…)"

"The irredeemable insurrectional spirit animating the protagonists of these two sets constitutes the axis of CHECK FOR MONSTERS, a CD which presents the bewildering aspects of a trio performance regulated by high-calibre musicianship. Never really exacerbating the inharmonious character of their expression, these artists do the utmost to reach an acceptable balance between a compulsory sense of disrespectfulness for the norm and an exhaustive analysis of the possibilities of the instruments, at least for what concerns the not-overly-extreme regions of timbre; namely, without recurring to preparations and additional dissections of machines that alone are sufficient to guarantee an appreciable degree of pandemonium.

Indeed the musical barometer indicates turbulence more often than not, yet finesse is clearly perceivable all over the programme. The three-minded logic that moves Yinothanot - almost eighteen minutes of last-chance insinuations and magnificent in-your-face rambling – is explicative of the general approach to this music. Evans is the perennial frontrunner, his trumpets sustaining the attention usually given to a wasp: we’re careful not to be stung when it flies, ready to be fascinated by its colours and features as it walks on a window. Beresford alternates deviously reminiscent phraseologies and eruptive outbursts, somehow managing to hang about the areas of pianism where his charismatic sincerity shines brightly. Lee’s cello sounds elegantly divergent at times, but is frequently and obviously the collating factor of parts which would otherwise tend to a stubborn affirmation of specific rights and needs – which, in improvisation, typically translates into technically advanced incomprehensibleness. Gwendol Ap Siencyn begins as a quasi-serialist chamber piece, then turns left to arrive at sonorities halfway through disgruntled incompatibility and genuine eagerness – always with a bitter aftertaste, though.

Arduous listening for the ill-equipped, this is nevertheless a rewarding album under any circumstance, uncompromising music whose unsentimental physiognomy symbolizes the best answer to the fossilization lurking behind the corners of theoretical autonomy."