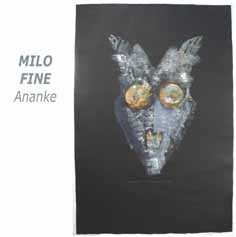 The first (and only) acoustic piano in my parent's home was an upright in mediocre condition. Not that I knew any better. Not that it mattered. The point was interfacing with the instrument, doing the work, making music. I simply didn't, and still don't have any bourgeoise aspirations. So, while I enjoy interfacing with grand or baby grand pianos, having, through a set of fortuitous circumstances, acquired a baby grand for use at home in 2003 (and continue to be absolutely outraged that pianists working outside classical and pop fields are relegated to playing back-up instruments at so-called prestigious/formal venues), I have in no way lost my respect for piano remains, which are, in the final analysis, nothing but unintentionally prepared pianos, relegated to 'elsewhere'.

The once a week 'Improvised And Experimental Music' series at the Acadia Cafe in Minneapolis was a direct extension of Unum, curated by Davu Seru from 2000 to 2001. Set up somewhat like an English pub; with a front room for dining / drinking, and a multi-use space to the side, where all manner of music and theater was presented, Acadia had a pleasant, inviting ambiance. The owner was, unfortunately and predictably, pretty much of a philistine, but, for the most part, easy to avoid. Still, in line with, it seems, almost every venue, he insisted that the series feature several groups per evening. Initially adhering to this requirement, as long as I had a say in who I shared an evening with, I eventually found my way around the 'law' by booking two or three different groups (all with me) on a given evening. (You see, I actually like to play, underscored by the pragmatic reality that, if I'm going to haul and set up all manner of equipment, I might as well dig in.)

Like too many spaces presenting music these days, there was, at first, no piano. However, in early 2006, as I understand it, Jordan, a volatile, sensitive young woman who worked at Acadia, donated an old piano she had sitting around her apartment. Though her piano had been tuned after the move, it was still more remains than intact. We cultivated a rewarding relationship over the ensuing months; to the point where I elected to do a set of solo piano presented here more or less intact. Interestingly, as the piano 'deteriorated', so did the series' relationship with the owner, and, as it turns out, the owner of Acadia with the owner of the building in which it was housed. Thus, Acadia elected to relocate and leave the series behind. The trio set here is from one of the final evenings. Fully aware that the piano would most likely be trashed or left to rot once Acadia moved, I resolved to really get into the innards of that wonderful beast. That Davu and Jaron were part of this so-called last hurrah was fitting, as Unum had begun with them seven years earlier.

The number of times Jaron Childs, a striking and accomplished visual artist, has quit playing music (and actually sold his saxophone, only to re-buy it; ultimately ending up with one on 'permanent loan'), exemplifies a particular type of struggle. Essentially self taught, Jaron's port of entry to improvised music was, for want of a better term, classical in nature. Thus, while playing an instrument mostly associated with jazz, part of his struggle has to do with sidestepping that sound; to wit, Jaron's instrument is the alto saxophone, rather than the alto sax. Additionally, his improvisational work is informed by the minimalist school (the spare sounds / limited materials, rather than ostinato-based branch), which saw a huge resurgence in recent years. My work, on the other hand, has always been much less beholden to any particular school or movement.

I believe Jaron's and my first experience playing together was a sextet set at Acadia on February 10, 2004, where, not surprisingly, we played past one another in the group, but in a surprising fashion with my opting for a more spare approach and he being more extroverted. The same thing happened some time later at the start of a private session at my home instigated by Jaron. But, over the course of that evening, without any discussion, we found nicely juxtaposed common ground. My approaching Jaron and Davu for the set here was fueled by several variables; Jaron's and my evolving dynamic, Davu's and my extremely fecund collaborative history dating back to 2000, Jaron and Davu's longstanding relationship, and, perhaps most immediately, the fact that Charles Gillett had, at this time, begun to curtail his public appearances (meaning that I could, that evening, 'take his chair' as it were).

Since then, thanks to Andrew Lafkas, I participated in a wonderful concert with Jaron, Davu, tuba player Stefan Kac, and Andrew on April 25, 2008. And, while it doesn't seem likely that we will be frequent collaborators, I look forward to further work with Jaron; that is, if his current horn's owner doesn't call in the loan.

Improvisation is composition in real time. More accurately, improvisation reveals the process of composition. Interfacing intuition and discipline, choices are made, that, while not necessarily being 'perfect' (as if that were possible, or even desirable), nonetheless seek to maintain a design that has much to do with chaos theory as formal organization. Thus, moments or sections which might appear to be less vital can be, and, for the serious practitioner, often are essential ingredients for the music's resonance and development. Put another way, unlike most formally composed music, improvisation gives weight to the backward glance where what comes after illuminates the necessity of the previous. Therefore, ideally, published work of improvised music should be presented in toto. Obviously, for many reasons, this isn't practical. But, in attempting to respect the process, I've at least always adhered to editing in terms of selecting start and end points.

On the other hand, through conversations as well as liner notes he's written, I'm well aware of Martin Davidson's penchant for surgical operations; the removal of what he considers to be 'below par' material. And while he has previously acquiesced to my preferred approach in our past collaborations, it was evidently time for a curve ball; or, more likely, he just wanted to get on to a project he had in mind without any aesthetic hand-wringing on my part. Indeed, I was surprised when a CD-R entitled 'Never Mind the Piano, the Pianist is Fine' showed up in the mail. (I periodically forward him material, and while he had mentioned especially liking the trio session here, he didn't give me any inkling that he was seriously considering publishing it.)

Putting the CD in the player, however, I noted that the running time was over 78 minutes. As I knew the trio set clocked in at about an hour (and less, once applause and the like were excised), I was mystified. But, upon listening, it became clear that he had annexed the solo piano set from the year before. Brilliant move, that. Now, given that I remembered the piano set to be around 30 minutes, if Martin hadn't mentioned his snipping in an e-mail, I don't now that I would have noticed. In any case, a little surgery was necessary to get the running time under 80 minutes, and as I thoroughly enjoyed the music as presented, there was, particularly given the respect and support accorded to me by Martin, no question of my acquiescing to his approach; at least this time around.

"This CD features two different sets by self-taught multi-instrumentalist Milo Fine. Throughout both, Fine exclusively played a semi-wrecked, detuned piano to which he added electronics during the trio gig. As explained in his liners, the protagonist wanted to 'really get into the innards of that wonderful beast'; one thinks about a primitively enraged, shocking attack as sweat drops fly all over the place but – surprise – we’re treated with a higher level of subtlety and detail in respect to the customary attitude this musician is notorious for.

This becomes particularly clear by analyzing the relations with Childs and Seru, who cleverly match their comrade’s inside-the-box meandering inscrutableness with persuasively unpretentious intersections and never-too-divergent alternatives, at all times in tune with the intentions of the 'leader'. The ensuing music reveals finely adjusted alertness and great accuracy, in evident contrast with the well-known propensity to lawlessness of Fine, who in this circumstance seems pleased to stay within certain dynamic borders - even in the quick-paced pseudo free-jazz characterising several chunks of the third part. A memento of how improvisation can fruitfully involve the listener without surpluses of ceremonial silence; there’s always something in between the extremes that works, if we only care enough.

The unaccompanied set allows MF to call out the rebellious alter ego a little more frequently, as he utilises his polyrhythmic skills and hyperactive fingers to concoct repeated ejections of scorching energy under the guise of torrential spells of plink-plonking hypervelocity. Still, moments of calmness and, get this, elegance are not missing: there are sections in which the precarious stability of the instrument results as the very origin of enigmatically resonating chords whose appearance makes me speculate about what our ears would obtain if some of these unrehearsed concepts were dissected, arranged and (anathema!) executed by a larger ensemble.

For sure the most satisfying outing I’ve heard by this artist, ANANKE is a record that requires consistently scrupulous listening to catch every nuance of its content. Substance prevails everywhere, no weak episodes to skip or discard. At 78 minutes plus, that’s an incontestable accomplishment."